When I wanted money freshman year I would wash family members’ cars for $15 or clean their houses for $40. The money was helpful but I wanted a real job with a regular schedule and a bigger paycheck.

During sophomore and junior years I applied for more than 30 jobs at mall clothing stores and coffee shops, but I never got a call back. I didn’t want to work at a fast-food restaurant because I would have to wear an ugly uniform and my clothes would smell. But toward the end of junior year, I was desperate for money so I applied for a job at Little Caesars Pizza.

I told the manager that I would be a great worker if she hired me. She asked me about my experience. I told her that I was good at selling yearbooks so I would be just as good selling pizzas. She said the job would be hard but I told her I could do it. She handed me an application and when I was finished filling it out, she told me I was hired.

My first week I made a lot of mistakes, like pressing the wrong codes on the register and giving the wrong change, but the manager who hired me said it was common for new cashiers to mess up. After a few weeks I got better and six months later I got a raise to $8.10 an hour for being one of the best cashiers. 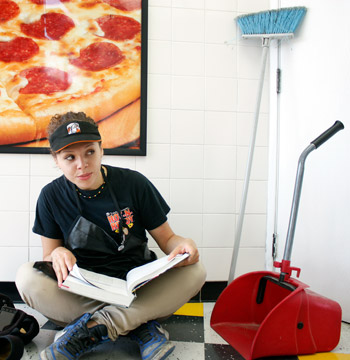 My favorite part about working was getting my paycheck. I made almost $200 every two weeks. I paid

for the books and materials I needed for the two college classes I was taking, especially the expensive photography class, and never had to ask my parents for spending money.

During that summer I worked five days a week for three to four hours a day. I had planned to quit when school started, but considering how hard it had been to get the job and how much I loved getting paid, I decided to keep working when I started my packed senior year.

I planned to take two AP classes and yearbook. I also wanted to volunteer with Key Club, work out, study for the SAT and ACT, and apply to college. I thought adding a job to my schedule wouldn’t be too bad. Before I went back to school, I told my manager I wanted to work Mondays, Tuesdays, Wednesdays, Saturdays and some Sundays for three hours a day. I was confident that I would have enough time to do everything just as long I stayed focused.

Just two weeks into the semester I was falling behind on my homework, especially for AP government. My counselor suggested I drop one of my AP classes and tell the colleges I was applying to that it was because of my job. I considered that but I felt like dropping one would make me look incapable of handling a busy schedule.

Too tired for AP government homework

I began dreading my job. On slow days, I mostly folded pizza boxes and cleaned, which made my three-hour shifts feel like six. When I got home, I wanted to sleep. But I had homework, which sometimes meant staying up until 3 a.m. I never did my AP government homework because it was mostly reading and note taking that wasn’t due every day. I always told myself I would start it the next night but I never did. Then the night before it was due I wouldn’t do it because I was so behind.

The days following those late nights were the hardest. I woke up at 6:40 a.m. with bags under my eyes. By fourth period, I would space out because my mind couldn’t keep up with my government teacher’s boring lectures. When I got home I would start my homework but fall asleep. On weekends, I hardly volunteered with Key Club because I needed to catch up on homework.

I would sometimes take AP literature vocabulary flashcards to work so I could study for a quiz while I was folding pizza boxes. But my manager found my flashcards and said that she could write me up for not focusing on my job. If I got three write-ups I’d be fired. She had one of the assistant managers take my flashcards. I was angry. I told the assistant manager that the cards weren’t distracting me because I glanced at them only occasionally when I was folding boxes. I told her how much homework I had and she said she had lots of homework too. Then I told her it wasn’t the same because AP classes give out more work than college classes but she said it was the same. I didn’t feel like arguing so I gave up and continued folding boxes. Later the assistant manager secretly gave me back my flashcards and told me to put them away.

In October my parents noticed how my schedule was affecting me. I hardly ate dinner in the kitchen with my mom and I hardly ever slept over at my dad’s house because I was working night shifts. When my mom would ask me how my day was, I would just say “OK” without looking at her and get annoyed when she asked me more questions. Then she would ask, “Why are you always so moody?”

I considered dropping government but my yearbook co-editor Ana said it would be better to keep my AP government class instead of my job because AP classes impress colleges. I told her I wanted to work because it was helping me pay for the things I needed.

I bought clothes and groceries

Even though I was stressed, I felt better when I got my paychecks every other Saturday. I bought a lot of new clothes and the biggest package for my senior dues, which included a sweatshirt, a mug and key chains. And sometimes I helped my mom pay for groceries. It felt great to pull money out of my pocket whenever I needed it.

Later in October, Ana and I were text messaging and she pointed out how “moody” I had been acting lately. I hated to hear that because I heard it enough from my mom so I ignored her. Then one day in yearbook, my advisor told me to lower my voice during a discussion. Later Ana told me that I sometimes used a stern tone when I talked. She also repeated that I’d been acting moody lately.

I started crying and told her I was stressed out from all my schoolwork. I said I was exhausted and I couldn’t handle it anymore.

For the next few weeks I’d get home from school, eat, nap, go to work, eat and then do homework until 2 a.m. I never had time to study for the ACT or SAT, work out or do any of my AP government homework. I had a C, the lowest grade I’d had since ninth grade.

In early November, the stress became too much. I walked into government class and the teacher mentioned that we would have a major test the next day. I hadn’t read any of the chapters, so I lied to my teacher and told him that my counselor wanted to see me.

When I went to the counselor’s office I explained that my schedule was too much for me because of my job. I told him that I wanted to drop AP government. He looked disappointed and said that it was technically too late to drop my AP class because the quarter was about to end. Eventually, I was able to drop the class with an “incomplete” and avoid having a C on my report card. I felt bad about dropping the class, but I knew that I had made the right choice. I took honors government in the spring.

I finally realized that I had to work less

To get some balance I also told my boss that I wanted to work only two school nights (Mondays and Wednesdays) and to replace my Tuesday shift with a Friday instead. She wasn’t happy because she had to find new cashiers to cover my shifts but I told her I needed to focus more on school. In the following months, I changed my schedule to work just Friday through Monday. My boss said OK and I was happy because this would give me more time for homework during the week.

By January I had mailed all my college applications on time and fulfilled my duties as yearbook editor. Even though I never studied for the ACT and SAT and I didn’t do as well as I wanted on the tests, I got into seven of the nine colleges that I applied to. I didn’t apply for many scholarships, though, because I was busy with work and school. When second semester started, things were easier because I was done applying to college.

I don’t want to scare anyone out of getting a job while they’re in high school, but if you’re going to get a job, understand the commitment and sacrifices you are going to have to make. You have only 24 hours in a day so you have to be realistic when you set so many goals for yourself for such a small amount of time.