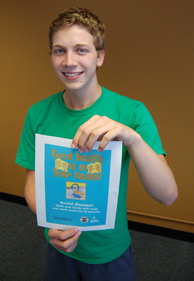 Gabe holds a flier from the county health department that reminds us to wash our hands as one of the best ways to prevent getting sick this flu season.


I was confused about how swine flu, which is also called H1N1, was different from the regular flu that comes every year. Back in the spring they were making a huge deal of it. Reports in the newspapers and on TV were telling you it’s scary and you hear about people dying. When my dad went to China for business, they took people’s temperatures when they got off the plane and if it was 1 or 2 degrees above normal they quarantined them. But when I came back to school there was a kid who got the swine flu and he was fine. It was confusing. Since it’s flu season, I wanted to learn more. What I found out was reassuring. Although as teens we’re more likely to get sick than older people, if you stay home and rest you can get better.

Here is information based on an interview I did with Susan Hathaway, a nurse, and Ben Techagaiciyawanis, a health educator, from the Los Angeles County Department of Public Health. If I get the flu I won’t be as worried as before. Be cautious, wash your hands, but don’t freak out.


L.A. Youth: What is swine flu? How is it different from the regular flu?
Swine flu, or H1N1 pandemic flu, is a respiratory infection caused by a new flu virus and it’s responsible for large outbreaks in many parts of the world. Its genetic components are composed of a combination of swine, avian and human influenza. The name has stuck to call it swine flu because it’s easy to say in news reports. We think that name is confusing because this particular strain of the flu virus spreads only among people, not pigs. It’s not found in pigs.
Most people don’t have immunity to it because it’s a new strain of the flu. It’s affecting mostly young adults and children, whereas seasonal flu [regular flu] most often affects those 65 and older.

Why does it affect young adults and children more than the regular flu?
We don’t know exactly why. There is some thought that people who were born before 1957 may have seen a similar type of the flu in the past and they may have some immunity.

What are the symptoms of H1N1?
The symptoms are similar to other flu symptoms. You may have a fever, cough, sore throat, runny nose, body aches, headache; you could be tired.

How can people get it?
The same way you can get seasonal flu or other respiratory infections. Mainly we’re talking about coughs and sneezes, drops that spread. If someone sneezes or coughs on an object it contaminates that surface, and if another person touches that same object or surface and rubs his or her eyes, nose or mouth, those are pathways for the germ to get in.

What can I do to prevent getting sick?
Cover your nose and mouth with a tissue or the insides of your sleeves when you cough or sneeze. Wash your hands often in soap and water. If you don’t have access to restrooms, you can also use alcohol-based hand sanitizers. Do not touch your eyes, nose and mouth because germs can get into your body that way. If you’re sick, common sense is to stay home. Avoid close contact if you’re sick or with others if they’re sick. You should stay home for 24 hours after the fever ends.

You call it pandemic H1N1 flu. What does “pandemic” mean?
It doesn’t mean that a disease causes severe illness. It means that it’s widely spread. What we’re finding with this strain of H1N1 is that most of the cases are mild to moderate.

Will more people get sick than from the regular flu?
Every year in the U.S. there are 36,000 deaths from seasonal flu and 200,000 hospitalizations. Thus far there have been more than 500 deaths due to H1N1 so we’ll see how it plays out for this current season.

Do you recommend getting an H1N1 vaccine?
It’s recommended for certain priority groups, including children and young adults from six months to 24 years of age. It’s recommended but it’s not mandatory.
The vaccine is expected to come out in mid-October. We’re recommending that you check with your doctor to see if he has the vaccine. And then if he doesn’t have the vaccine or you don’t have a doctor, there are going to be more than 250 places with it in Los Angeles County starting in mid-October and running through mid-December. You can go there and get the vaccine for free. Those will be listed on the L.A. County website, http://publichealth.lacounty.gov.

Do you have any last thoughts?
Just to remind you that most people that have had the swine flu in the U.S. got better on their own. They didn’t need to get medicine, they just needed to stay home. Don’t panic if you think you have the flu. Also, wash your hands, cover your cough and stay home if you’re sick.