My youngest “sister” is just a baby. She wasn’t even two weeks old when the social worker dropped her off. She was sleeping and wearing green pajamas. One day she could go home to her mother or will be put up for adoption. But for the next year we’ll be her family.

My family started fostering children about two years ago. My mother would bring it up. “What do you think about fostering? Only the little ones though.” I figured she meant we’d get toddlers and it’d be like a day care. I thought it would be fun and that it would be nice to have more responsibility because I don’t do much around the house.

I also wanted to foster because I thought we could help the kids. The court can take a child away from their parents if it’s determined that the parents are unable to take care of the child because of drug use, abuse or neglect. I think these children should have a safe place to go to. I thought that if we took care of them, they would be OK.

Even though my mom came up with the idea, I had to convince her of all the good things we could do. “We would really help mom!” She was hesitant but I was determined. “We could buy them clothes and food and toys with the money we get,” I said, referring to the monthly payment we’d get for taking care of them. My mom said, “Fine, if you want to do it, you have to help me.” I said, “I know.” “You have to change diapers.” I didn’t want to do it, but I said fine. “You have to help me feed them and burp them, especially at night.” “Fine,” I said. I really wanted to foster kids and I was determined to help them. Finally, a few weeks later, my mother said yes.

A few days later she came home with a binder full of information from the foster agency to share with me and my sisters, Beverly and Yoce. She would have to get a background check and take classes, one for CPR and another six-hour long seminar about taking care of a child.

We got the house ready for kids

We had to child-proof the house. This was the most tedious part. My mother gave us a list and pointed to a bag filled with electrical outlet blockers. She told my 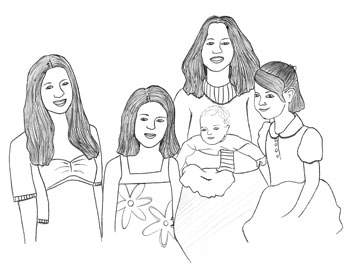 sisters to plug them into the outlets. I had to lock up the dangerous items, like knives, scissors and medicine, in a closet. It took two hours to move and organize everything. We also needed an emergency kit in case of a disaster and a separate room for the child.

We furnished our extra bedroom. We went to Wal-mart and bought a crib and mattress. We bought pajamas, beanies, mittens and socks. We tried getting both boy and girl colors, but my mother couldn’t resist the pink sheets. Along with the sheets we bought a green highchair, a yellow blanket and diapers. I was excited and hoped we had bought everything we needed.

My mom got toy donations from work. There were dolls and books and a toy truck. We also bought this little green chalkboard sign to put on the child’s door so my mother could write the name of the kid who was there. Inside the room, we put up an old Cinderella poster and pictures Yoce painted. I could picture a baby boy there. I saw him playing with the toy truck and sleeping on the pink sheets.

Finally, about two months after my mother applied to be a foster parent, a social worker came to make sure we had done all the necessary preparations. A few days later they called and told us we’d been approved to be a foster family. They said they’d call again when we’d get a baby. I was excited and relieved. We were finally done with everything.

I called my mom after school a week later to see if she was picking me up. She told me we got our first child. “OK! I’ll be right there!” I said. I ran to where my mom’s car was parked. I was wondering if it was a boy or girl, how old it was, how it looked. When I got there I saw a little boy sleeping in a car seat. “What’s his name?” “Joseph,” my mom said. He had funny ears that bent down at the top, a round head and was almost 2. I couldn’t wait to play with him.

For the first few days, he just sat there and looked at us like “Who are you?” After about a week he would run up and down our living room, fall, get up and continue running. We had him for only about a month, and then he went to live with his grandmother.

Our next foster child was just a little baby

About a week later, we got Asia. She was less than a month old. She had black curly hair and big brown eyes.

On weekends I took care of Asia at night and helped my mom during the day. I thought the night shift would be easy because I go to sleep late, around 11 p.m. We would put Asia in the cradle and she would sleep in my room. She would wake up about every three hours. Faintly hearing her cries, I’d haul myself out of bed, still in a zombie state as her cries got louder every second. I would make a bottle with formula and feed her while sitting on my bed. After she finished the bottle, which took about half an hour, I would lay her on my chest and pat her back until she burped. Quickly, I’d change her diaper and wrap her up in a blanket like a burrito. I’d hold her until she fell asleep and put her in the cradle. Before I knew it, I was getting out of bed again to take care of her. I was dead tired in the morning but it faded as the day went on.

Thankfully, Asia’s mom was able to get her daughter back six months later, after she did what the court told her to do. We still keep in touch. Sometimes my mom calls her mom and we visit. She even e-mailed us Christmas pictures! From what I’ve heard their family is doing great.

Last June, Andrey came to live with us. He was my favorite, partially because he stayed with us the longest, but also because he was the cutest. He was a 2-year-old with blueish hazel eyes, reddish-brown hair and an enormous appetite. Andrey could eat an entire In-n-Out burger. We’d call him “the monster” because he ate so much.

He was funny. We all went for a walk one evening. The sun was low and out of nowhere Andrey began screaming, “AHH!” It was incredibly high pitched. We turned to look and he was pointing at his shadow! He started to run, looked back and screamed even more when he saw that this mysterious thing was following him. I ran after him, laughing.

When I first wanted us to be a foster family I mostly thought about how my day wouldn’t be so dull. I didn’t think about why the kids needed us. I was shocked when my mom told me the stories of why the kids were in foster care. They are so heartbreaking. Andrey’s story was the saddest one. His father tried to commit suicide after his mother had died. Andrey was taken away from his father because the court said it wasn’t safe for him. His dad was ordered to go to therapy and parenting classes. I expected the stories to be sad, but getting to know the children makes it more real.

When my mom broke her ankle while hiking, Andrey had to be transferred to a different family because she couldn’t take care of him. It kills me to say this, but I felt worse about losing Andrey than my mother breaking her ankle because I knew she would be fine. It was really hard not to cry when he left. He’d been with us for nine months.

Andrey left in February and we had about a four-month break from fostering while my mother recovered. When my mother got better we went to our foster agency’s annual festival for the foster families and the foster kids. Hoping I’d see Andrey, my heart pounded as we arrived at the park. The agency told us Andrey would be there. We were all hoping to see our little “monster.” When we did, he didn’t remember us. He looked confused. I picked him up and Yoce said, “Look Andrey, its Hellie!” He said, “Hellie,” and there was a little more excitement in his eyes. We sat down and played. I stood him up on my lap and made him jump by lifting him in the air. It was a bad idea because he never lets you stop once you start playing. After 10 minutes my arms were aching and so I set Andrey on the ground. As he waddled away, I kept thinking, “I’ll miss you,” and hoped he would remember us. About four months later we got a call in June. Andrey’s dad had gotten better and Andrey would be returning to him, where he belonged.

I know it’s best when they return to their families

Evangelina lives with us now. She is a tiny 4-month-old baby. Her mother used drugs when she was pregnant and Evangelina tested positive for meth when she was born. Her mom has six months to a year to get off drugs and go to court-ordered counseling. Then the court will decide if she’s fit to get Evangelina back.

Each foster child becomes part of our family, no matter how long we have them. We don’t call them foster kids. When someone asks, my sisters and I refer to them as our brother or sister and mom calls them her child.

These children make every day more fulfilling. They are fun, but the responsibility needed to take care of them and be their family is more rewarding. I like to think my family and I are doing something important. We give them a place to stay and care for them like family. We love them. When they leave, I hope it’s for the best. I hope they’ll return to their family, loved and safe.