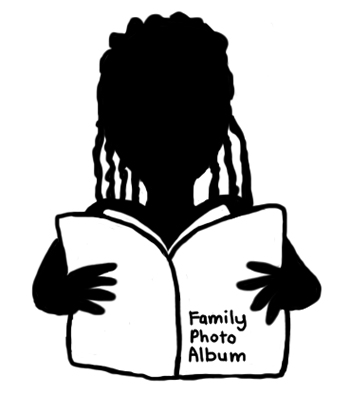 * Editor’s note: We are not publishing the writer’s name to protect her family’s privacy. All names have been changed.

When I was 6, my brothers and sister and I went to live with my aunt because my mom used drugs. I was happy when my aunt took us all in because we could be together. There are five of us and we always took care of each other because our mom couldn’t.

At first Aunt Charlotte was nice to us all—my older brothers Tyler and Roland, my little sister Alicia, my little brother Christopher and me. For our first Christmas and birthdays with her, she bought me and my sister Barbie dolls and my brothers a basketball and all of us bikes and scooters.

But after about six months, for some reason that I still don’t know, she stopped being nice. If things didn’t go Aunt Charlotte’s way, she would yell at us and hit us. We’d get whoopings if she thought our facial expressions were disrespectful (even if we weren’t trying to be), if we didn’t eat all of our food or if we didn’t flush the toilet. She’d say, “Who didn’t flush the toilet?” None of us would say anything, but my big brother Tyler, who is three years older than me, would say, “I did it.” Even though he hadn’t, he’d take the whooping for us.

Tyler was always taking care of us. No matter whose turn it was to clean the bathroom or the kitchen, Tyler would help and most of the time he’d even clean for us.

I tried to be like Tyler and keep an eye on my younger siblings. Christopher struggled with his grades. I protected him by sometimes lying to Aunt Charlotte and telling her he was doing OK in school. This kept him from having to stand in the corner for hours by himself and getting another whooping. If Alicia got hit I would try to cheer her up by doing a silly dance in our bedroom just to make her laugh. I didn’t want her to feel sad, because whenever she was sad, I felt sad with her. I wanted her to know that she has someone who loves and cares about her.

When I was around my brothers and sisters, I could joke around without worrying about getting in trouble, but I was quiet around Aunt Charlotte to save myself from the abuse. Aunt Charlotte would call me ugly and talk about my dark skin and short hair. I was almost always scared.

She would threaten us, “If any of you tell on me they will split you all up.” She made it seem like we wouldn’t see each other again until we were grown. She told us no one would want to take in five foster kids. I believed her because raising five kids is hard work. My siblings and I were too afraid to tell anyone about the abuse.

On weekends, we got away from the abuse

But on weekends we could just be kids and have fun. We’d go to a church member’s house and we would play tag and jump rope together. One game we’d play was “Sir, yes sir!” One of my older brothers would be in charge and tell the rest of us what to do. He would say, “Give me a lap!” We’d say, “Sir, yes sir!” and run around the front yard. You weren’t allowed to laugh, and if you did, you’d get penalized with an extra lap or push-ups. It was hard not to laugh because he’d deepen his voice to try to sound older.
l

My church mom called the Department of Children and Family Services and reported the abuse, but when the social workers asked us if Aunt Charlotte hit us, we lied and said that she didn’t. We were so scared about how Aunt Charlotte might react and that we would be separated that we couldn’t tell the truth.

One day during school a few months later, Alicia, Christopher and I were called out of class. When we got to the office our social worker was there and said, “You’re coming with me.” I was happy that we would finally be moving but I was crying because I didn’t know where I was going to go. I had no idea why our social worker came that day, but looking back, my guess is that our church mom called the foster care system again.

My Uncle George took my three brothers in and my Auntie Tanya took me and Alicia in. It was good that we were with family but it sucked that I wasn’t going to be able see my brothers all the time. They lived in South L.A. and we lived about an hour away in North Hollywood. The system separated us because they wanted the girls to live with a woman and the boys to live with a man.

I’d see my brothers when my uncle would come and get my sister and me for the weekend. I didn’t feel as close to them seeing them only twice a month. I missed talking to them about what was going on in our lives. I missed walking to school with Christopher. I didn’t know what they were doing or if they had friends or girlfriends. Most days I didn’t even know if they were happy.

I didn’t get along with Aunt Tanya because she’s a neat freak. My sister and I shared a closet and would stack our folded clothes on the floor. That would make Aunt Tanya mad. She didn’t want to see any clothes on the floor ever. She would say, “If you guys want to stay with me you’re going to have to clean up after yourselves. I can’t live in a dirty home.” But my sister and I thought our room was clean.

I called my brothers when I needed them

When I’d get into a fight with my aunt and needed someone to cheer me up I would call Tyler or Roland. Roland would say, “Don’t talk back to her and do what she says.” I thought it was good advice because it would stop the argument.

Alicia and I moved in with Uncle George temporarily while the foster care system tried to find us another woman to live with. I was happy that I would be able to spend more time with my brothers, but sad that it wasn’t going to last long.

While we were living with Uncle George, he took us to Hawaii. It was amazing. I got on a plane for the first time. I’m scared of heights, but it was super cool to see the clouds up close. It was fun to spend time with my siblings away from everybody else. Hawaii has the clearest and bluest water and the beach is so clean. We went snorkeling. That was scary because we were in the ocean and I’m not a good swimmer. But it was fun and I felt safe because Alicia let me hold on to her and I was wearing a life jacket. We also went to a luau (a traditional Hawaiian feast on the beach). Every day we would tell Uncle George, “Thank you for taking us on this trip.”

When we got back to California my social worker found a wonderful lady, Shonda, for me and my sister to live with. Shonda lived in Watts, about a 10-minute drive from my uncle’s house, so we got to see my brothers almost every weekend.

After about nine months with Shonda, when I was 14 years old, my uncle told me and Alicia that he was getting a room ready for us to move in soon, but he didn’t know exactly when. I was so excited that I would finally get to live with my brothers again.

A couple months later when he picked us up for a weekend visit he surprised me by saying, “You’re moving in with me.” I said, “Oh my god, for real?!” I was super happy. I smiled while I packed that night and kept thinking about getting to talk with my brothers every day and finding out who they’re dating and how they’re doing in school—stuff a sister should know.

Living with my uncle has been amazing. My brothers and sister and I have been able to share the important moments. When my boyfriend in eighth grade cheated on me and dumped me, my brothers said not to cry over that guy, because I would find someone better. And Christopher and I have dance and rap battles during the holidays with Alicia as judge.

My uncle likes to travel and he took us to the Grand Canyon our first summer with him. He takes us to San Diego and in 2009 we visited San Francisco when we took my brother Roland to college in northern California. Everyone tried not to be the first one to fall asleep during car rides, because whoever did would get a wet willie, which is when someone licks their finger and sticks it in your ear while you’re sleeping. Christopher got the first one on the way to San Francisco, and I got one, too. It was disgusting, but I’ll always remember those wet willies.

We also go to church and the movies and lots of family events with our uncle. My uncle’s family meets up on Thanksgiving and Christmas and Easter. We all go to Aunt Lena’s house and she cooks a lot of the food. In the morning or the night before, Alicia and I help my uncle make enchiladas or sweet macaroni and cheese so we can bring it to the gathering. The family eats, plays cards and dominoes, and catches up. I’m happy because I’m around people who show my siblings and me love.

I understand why the foster care system separated my brothers from me and Alicia. They were trying to place us with adult family members. But they didn’t realize that staying together was even more important to us than staying with relatives. Ever since we were young and lived with our mom, we’ve been the only ones we could count on to take care of each other. I feel blessed that I was reunited with my brothers. We’ve been living together for four years in a loving home. I finally have what I’ve always wanted.