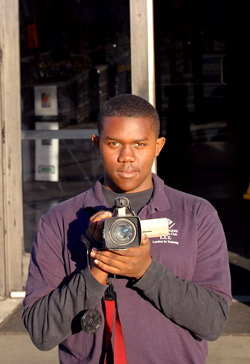 Whenever I look out the window while on my way to the Challengers Boys and Girls Club in South Central Los Angeles, I see a brick building with graffiti that goes all the way up the side. It’s so high that I’ve wondered how they reached the top, which is more than 20 feet up. Bricks have fallen off and there’s graffiti on the sidewalk too. The boarded up building is on an abandoned lot that nobody fixes up. I can understand why someone who hasn’t lived in this neighborhood would see this and think that nobody cares about the community.

But people shouldn’t look at South Central as bad. There are people who live here who are trying to make things better. This community, which I’ve called home my whole life, just needs a chance.

I first saw how much impact people can have at the Boys and Girls Club, where I’ve been coming since I was a little kid. Parents volunteer as homework tutors and help teach knitting and cooking classes. After working on a documentary about the community and the people who give back to it, I see even more clearly how much improvement people can make. But the community could use even more people who want to help.

I started working on the documentary in the fall of 2007 when the former video teacher at the Boys and Girls Club, Kellen, asked me if I could help him with a film he wanted to do about South Central. [Documentary plays at end of story.]

Old and tagged billboards were signs of neglect

The first thing Kellen wanted me to do was look for billboards in my neighborhood, because they reflect the type of community we’re living in. I saw a billboard in Spanish, the “My kitchen, my rules” billboards and a whole lot for movies. He also wanted me to tell him about the condition of the billboards. As I saw the billboards day after day I noticed that they get tagged and there were ones for movies that were gone from the theaters. It seemed like the movie studios advertising the films didn’t care about us or whether we saw their movies. And neither did city officials, because those tags would be up there for months.

Then I wrote down the conditions of vacant lots and buildings. In the car or on the bus while I was looking out the window, I’d write down a street name and what I saw. When I saw vandalism I thought that the people living around there just probably don’t have enough time to fix it.

Each week during the school year Kellen gave me a new assignment and questions to answer, like figuring out what I wanted to say about my community, describing my family’s values, what were my favorite places and places I didn’t like. As I worked on the answers I didn’t always understand how these questions would help us create a movie, but I had faith that it would work out. 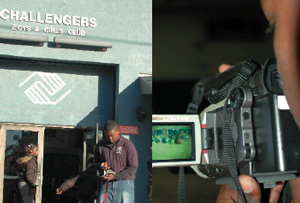 Justin knew he had to include Challengers Boys and Girls Club, where he has been coming since he was a kid, in a documentary about what means the most to him.

Around spring break, Kellen wanted me to interview people who are important to me and who I thought did something good for the community. These interviews were going to be part of the documentary. My mom and my grandma jumped to mind right away because they’ve been such a strong influence in my life by keeping me on the right track—valuing education and staying away from drugs, gangs and violence. Mom has always kept trying to find a better-paying job to provide for me and my brothers. She had been a clerk in a nursing office and now she works as a personal assistant at a trade show company  and makes more money. My grandma always gives inspirational speeches about not quitting, especially when we want to. I once got really frustrated building a model roller coaster, but she made me finish, saying that if I gave up on the roller coaster, I’d become a quitter in the future. There’s no way I’m going to become a quitter.

I knew I had to include the Challengers Boys and Girls Club. If there were no Challengers and the activities it offers, more kids would join gangs or use drugs. Or they’d be stuck at home because they’d be afraid to leave their houses. This area can be dangerous with the gangs around.

I wanted to film interviews with the staff because they’ve all made a difference in my life and also in thousands of other kids’ lives. They work with kids every day and make sure that they’re not getting into drugs or gangs or getting pregnant. I admire the people who work there because they haven’t quit even though some of the kids don’t always listen. The staff and volunteers don’t let kids give up on their goals, even when kids want to give up.

The interviews were challenging

Coming up with interview questions with Kellen was hard. It’s a movie about the importance of community involvement, so I needed to come up with questions that would get the people to talk about how they have been involved in the community, what they’re doing for kids and why they’ve chosen to do that.

But the hardest thing about filming the interviews was the background noise. Kellen and I did the interviews at the Boys and Girls Club and there was always the sound of feet stomping from kids running around. Another thing we had to work on was telling the person being interviewed where to look. We didn’t want them to look directly at the camera. When people look directly into the camera it feels like they’re staring at the viewers and that could make the viewers uncomfortable.

I also interviewed people who work and volunteer at the Southern California Library at Vermont and 61st Street. The Southern California Library records the history of the neighborhoods and people in the area. That’s where I learned about the California Eagle newspaper, one of the oldest newspapers in the United States that was written by African Americans. This showed me how others have tried to improve this area, even years ago. When you watch this section of the film, you see that you don’t have to be a big club like Challengers to help others. You just need to want to help somebody. The people at the library saw their work as important because there aren’t other libraries in this community that preserve the area’s history like this.

After completing the interviews we had to figure out which parts we wanted to use. We had 10-15 minutes with each of the 12 people we interviewed, and the film is only 16 minutes long. David, who teaches computers at the Boys and Girls Club, told an interesting story about a kid who changed his attitude for the better. But we decided it would be better to hear it directly from the student, who we also interviewed. 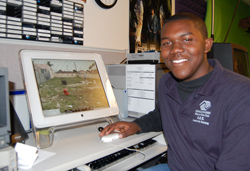 Justin used a camera from the Boys and Girls Club and the club’s video production room to make the documentary.

Would people understand my message?

After six weeks of slow work (I spent about 55 hours editing) everything was finished. Before I pressed play that first time, I was so happy because I was finally done sitting at the computer. My first audience was my mom, grandma, auntie and two brothers. We watched it at home and I was nervous because they could hate it. But they were happy—my auntie cried. And they didn’t have to ask what it was about after watching it. When you can get your audience to understand most of what you want them to learn then you know you did a good job.

We showed the film, called Grow, at the Boys and Girls Club in January. Everybody who saw it gave me good feedback. One parent told me that I need to keep doing what I’m doing because if I don’t, there will be no way for other people to hear the story of young people living in South Central. That made me feel good. If we—the people of this generation and this area—don’t tell our story, nobody else will. I want people to change their minds so that after watching this documentary they will become the type of people who help others.

To get the message out, we entered the film into an independent film festival in Fresno and part of the movie was show at the Pan African Film and Arts Festival (PAFF) in Los Angeles. The people at the PAFF really liked it, which meant a lot because this movie was made about the people in South Central and many of the people at the festival were from there. Also, I was on a panel of young filmmakers at the festival. I was honored that I got picked. As part of the panel, I wanted to make sure people knew that South Central could be improved.

Since making the movie, which we also posted on YouTube, I’ve changed the way I see things. Before, graffiti on a sign meant nothing to me because it was so common. Now, I try to figure out why the person did that. What were they mad about? Does that person have money problems? Maybe the person considered it art. Our community should provide a place for that person to do graffiti that’s legal and offer art instruction. South Central could use more resources like that.

People here also need more job opportunities. It’s important for businesses and homes not to end up closed down and boarded up. It’s also better when parents work closer to home, so families can spend more time together.

We need more places for teens to go. Maybe a bigger teen center at the Boys and Girls Club and a place to learn about college and what majors might fit you, a tutoring center to help students pass the exit exam. I also wish there were closer movie theaters (the closest is 30 minutes away by car) and stuff to do like mini golf and more parks. Businesses might think that the area is too dangerous, but I disagree. Nothing has happened to Challengers because it helps the community, and people around here love this place and wouldn’t mess with it.

But we need other people to donate time and money and effort. That’s how these neighborhoods could develop and grow. People don’t become successful without someone else helping them and giving them a chance. That’s what I’ve been given at Challengers. In the video production room, we have newer cameras, Final Cut Pro editing software and a green screen. It’s a professional studio, just smaller. Taking the video production classes taught me that I want to have a future in film.

There’s a building near my house that’s been empty for as long as I can remember. Why has it been here for so long like this? Why doesn’t anybody own it or live in it? Every time I see something like that now, I think, why isn’t this a community center, restaurant or even a homeless shelter? And I also think about whether there’s a way I can put it into a film and raise money so that it could get fixed up. Before making this movie, I wouldn’t have thought I could make a difference.


Dear readers, we need your help.
As a non-profit, L.A. Youth needs the support of readers like you to ensure that we can continue publishing the work of talented writers like Justin in the county’s only independent teen newspaper. Click here to see how you can donate money to L.A. Youth.