My mom and I step into the elevator of our local Sav-on drugstore, laughing and chatting idly about the day’s events. On one of the stops, we’re joined by a fellow shopper with long, silky brown hair, wearing a halter top, pumps and impeccable make-up. However, with features almost too beautiful and a figure perhaps a bit too androgynous, this woman is clearly a man. The elevator door opens, and he struts out, miniskirt and all. It is only a few minutes later that I notice anything at all—the fact that this whole time my mother and I neither stared nor smirked nor giggled. We didn’t even exchange a glance. The only thing I did notice was how we didn’t notice.

I am a 16-year-old straight female, born to straight parents, who has lived all my life in the heart of West Hollywood, one of the nation’s predominantly gay cities. This is partly the reason why I support gay marriage and gay rights. Because I didn’t know what homosexuality was until I was about 8 or 9, I spent those first years getting to know the people in my community as just that—people. True, life in West Hollywood is not identical to that of a gated Calabasas suburb. Twice a year I witness the flamboyant antics of the Gay Pride Parade and our Halloween Carnival. But as a little kid, I always thought it was funny to see men wearing dresses and makeup and that it was really neat that adults still liked to celebrate Halloween. The other 363 days of the year, I saw gays and lesbians live their lives just as everyone else does, walking their dogs, buying groceries and eating at restaurants. I was not surrounded by blatant acts of sodomy or constant flaming displays of homosexuality. In short, what my experience has taught me is that homosexuals just want to live life without a label of their sexuality shadowing their every move.

‘Gay lifestyle’ is not so weird

I’ve seen that the "gay lifestyle" is not perverted or even that different from the "straight lifestyle." I am also proud of the acceptance and tolerance I see in my community daily—I only wish that the same level of tolerance existed everywhere.

I grew up seeing women hold hands with women and men kiss other men, and I knew that was different from how I felt. But I also knew to respect and accept that because their behavior was simply another alternative to who they could love. And most importantly, I knew that there was so much more to people, gay or straight, than who they shared their bed with.

I was also raised by parents who understood that homosexuality was not a choice, but a sexual preference people are born with, just as skin color or ethnicity is a part of who a person is. This was only reinforced by seeing gays and lesbians live their lives with their sexuality as one part of it, not the driving force in it.

However, many opponents of gay marriage don’t share that view. They see people’s sexual orientation as a moral issue, and believe homosexuality is a choice. An immoral choice that is against the word of God. In fact, most opponents I’ve encountered are driven by their religious beliefs. Though our views differ, I very much respect them.

But we live in a country built on a separation between Church and State. So why should one group’s moral beliefs, based on their religious upbringing, influence how others can spend their lives with the people they love? People who hold these beliefs may be morally offended. But what gays and lesbians do in the privacy of their own homes remains there. Their relationships are not doing any harm to those who believe that homosexuality is a sin. In fact, they can benefit society. Many gay couples make wonderful parents. In a world of dysfunctional families and single-parent households, why shouldn’t we make it easier for kids to have two loving parents by legalizing gay marriage? 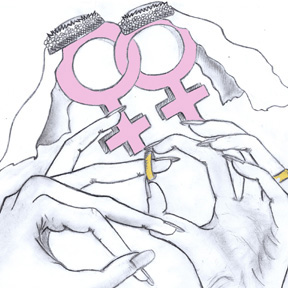 Marriage should be a civil right, a bond that allows two people who love each other to live their lives in a way that creates a stronger system of support and love. The anti-gay marriage mentality, when you get down to it, is grounded in fear. Many are afraid that gay marriage would undermine the whole structure of our society and that it may even change the very nature of love. But love is not something that can be defined or contained within a set of laws. Politicians can take away these civil rights from homosexuals, but they cannot take away the love between them or even hinder it by preventing their marriage. I have seen gays and lesbians live productive, happy, healthy lives all my life. I have grown up in an area where many have essentially formed marriages and families, and the only thing they have undermined is the belief that a gay family cannot function and be as happy as anyone else. Legalizing homosexual marriage will only provide more rights and benefits to relationships and families that will continue to exist and thrive, whether marriage is legalized or not. I am not asking people to throw their beliefs and upbringings out the window. I am simply asking them to respect the rights that homosexuals, as people, deserve.