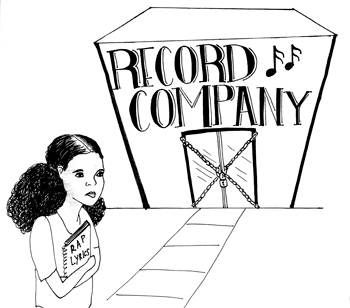 When I ran away from my dad’s house I was 14 and wanted to be a rapper. I thought I was going to get signed by a record label and get a lot of money. I thought I’d be famous by now. It hasn’t worked out that way. I didn’t make it as a rapper but I don’t regret running away. It got me into the foster care system. The system helped me get back in school and learn how to be an adult. Without foster care I’d probably be a dropout or homeless right now.

My dad doesn’t have a job. He drinks every day and hangs with his homies. When I first came he and his girlfriend sat me down. He said, “You’re almost grown. I ain’t got no rules for you. I don’t know how to be a dad. I don’t want you to go out on the streets to drink. If you’re going to drink, you drink in this house.” He was talking to me like I was a roommate. It was cool with me because I didn’t like rules.

I didn’t go to school because I knew my dad didn’t care. I hardly did anything besides get on the computer and drink hard alcohol like brandy. I was really into writing lyrics and making music. Some of my dad’s friends were rappers and I saw them work with the software. Eminem and 50 Cent rapped about where they came from and that’s what I wanted to do. I’d record rap and hip-hop songs about making it big and being in “the hood.” I had a music page on MySpace with three songs that had more than 1,000 listens. When I finished a song I would think, “If this has a little more work on it, it will definitely be a hit.”

But not everything was good. My dad and his girlfriend would always fight about stupid stuff. One time I tried to break up a fight and my dad’s girlfriend kicked me out in the middle of the night when she was drunk. My dad’s friend gave me a ride to another family member’s house.

After I’d been there a couple months I was fed up with everything. I asked my grandmother if I could come home but she said no.

I wanted to run away. I called a runaway hotline and told them I wasn’t getting along with my parents. I said I was going to leave but that I had nowhere to go. They said there were beds at a shelter in Hollywood and that I could go there any time.

I’d had enough of the fighting

I waited a month to see if things got better. But they didn’t get better, they got worse. After I got into another fight with my dad’s girlfriend, I went in my room and packed. I wasn’t scared because I had everything I needed. I had all my notebooks full of rap music. I thought, “I’m going to Hollywood, which is the center of the music and acting industry. You can’t go wrong in that city.”

I left the next morning at 5 a.m., when my dad and his girlfriend were asleep. I had my bags and $15 in my pocket. I knew I was serious about leaving after I set my house keys on the dresser before locking the door. My heart began beating quickly. I kept glancing at the door as I headed out the front gate because I was paranoid that they’d notice I was gone. It was dark out. When I arrived at the bus stop, I hid myself in my coat. It took me two hours to get to Hollywood.

When I arrived at the shelter everyone was my age. There were people playing Xbox and some kids asked me if I smoked and I said yeah. I felt right at home. In the morning they had school at the shelter but I left before they made me take classes. I didn’t want to mess with school. I wanted to chill with the other kids. We went out at night and rapped for people on Hollywood Boulevard. When we made $5 we’d get weed or food.

When people asked me where I was from I’d say, “I’m from L.A. I’m here to be a rapper and I’m going to make it big.” One day I went to Columbia Records and I tried to go inside. A security guard said, “Oh no, you can’t come in here. You have to have an appointment.” It hit me that it’s not as easy as I thought. I need exposure for them to represent me. I realized it takes years to get recognized. That’s too much work. I stopped writing as much music and I stopped bragging about it. The more I thought about it, the sillier I thought it was.

The shelter staff lectured us that education was the only way to get to our dreams, so I started going to the shelter school. After I told a counselor at the shelter about my problems at home, they put me in the foster care system and I was assigned a social worker. I moved to a foster home for a month, then with my grandmother. She wanted me to come back. She felt I should be at home instead of in a stranger’s house.

I kept moving from place to place

For the next two years, I never stayed put for longer than three months. It wasn’t long before my grandmother got fed up with my behavior again. I was sent to my mother in Victorville, 90 minutes from L.A., where I got tired of my mother and the foster care system. I didn’t feel in control of my life, with a social worker checking on me every week, asking how I felt and controlling who I saw. After saving up money I took the Greyhound bus to Las Vegas and moved in with a friend. I didn’t stay there long, about two to three months, which wasn’t a surprise. I returned to the shelter in Hollywood but when they contacted my social worker, I left because I didn’t want to be in foster care. I tried staying at my dad’s house but he told me he could get in trouble for keeping me when I’m supposed to be in the system. I realized my only option was to go back to the system or be homeless. I was tired of moving around so I went back to foster care.

On April 8, 2010, the day before my 17th birthday, I was placed in a foster home. That day I found out the woman was my aunt on my dad’s side. I was a little more comfortable because her family was my family. But I was still being disrespectful. I ditched school to hang out and didn’t bother doing work when I did attend. Some nights when I was partying I stayed out until the next day. I got kicked out of school for cussing my teacher out.

I got in a few fights with the three other foster girls in the house. One time I was joking around with my roommate about how she looked. She said, “B**** I will beat your a**” and that’s all it took to make me snap. I cussed and hit the girl. My foster mom requested a seven-day notice, which gives the system seven days to move you out of a house.

They placed me in a group home, which is a home where foster youth live with adult staff. The place was nasty. The first night I saw a bug crawling on my bed. The girls walked around cussing and demanding things. They didn’t allow us to go anywhere or do anything. We had to earn freedom, which took weeks or months. We had to eat according to a schedule and weren’t allowed to go in the kitchen. I felt like I was in prison. I called my social worker and complained.

Two days later, I was moved back to my aunt’s temporarily. She was very ill in the hospital. I didn’t want to get kicked out again and go to another group home so I was on my best behavior. A few nights later as my aunt lay in the hospital bed, she said she had decided to give me a second chance. I was happy. That was a wake-up call. I sat down and thought about my future. I told myself, “Don’t go back to your old ways.”

Since I had gotten kicked out of my last school, my only option was a continuation school in Long Beach. My first day the teacher asked me, “What’s your favorite subject?” I said English and he started me on it. He asked me, “Why are you here?” I told him I cussed a teacher out. He made a joke, “I’m a nice guy so you won’t want to cuss me out.” I laughed. And that’s how it started. I sat down and did some work.

I became a good student

I continued doing all the right things for the next couple weeks. When my aunt came out of the hospital she saw that I was doing good. I got my first report card in a long time without Ds and Fs and it only got better. I liked the school. There were no cliques or gossiping and we got to work at our own pace. When I got a lot of work done my teacher, Mr. Napoltes, would tell me I did the most assignments for the day for a week straight. He said if I kept it up I would graduate before I knew it. It kept me going.

I also began the Independent Living Program, which are classes the foster care system offers to prepare you to become an adult and live on your own, like how to write a check, pay your bills and grocery shop. I had thought that as long as you worked, you would have everything you needed. We budgeted how much housing, food and clothing cost in a year. Then we compared a job at a fast-food restaurant to one you need a college degree to get, like business or nursing. With the fast-food job we couldn’t get half the stuff we needed.

Our ILP teachers said the system can help pay for college. They said that if you go to college, you’ll have a better future. But if you sit     around it’s going to be harder. I realized I’m not going to make it without an education.

I never missed an ILP class and I was always on time. At the end of the six-week program, I got a certificate that called me Most Persistent. I knew I was being more serious. I said, “If I can go through this class, I can go through school and college.”

I realized that no matter where you go, there will be rules and you have to follow them. I want to go to college and become successful. For once in my life I want to stay put and focus. I don’t want to run anymore.

So far, life is great. I have all As. I want to go into the Navy, take college classes and be a journalist. I’ve realized success is a process, it happens slowly as you push toward it. I’m determined to be successful.