When the new year comes around it seems like the perfect time for self-improvement.Even though I’ve always failed my New Year’s resolutions, every year I promise myself that this time will be different. I’ve tried everything from being a vegetarian to starting my homework earlier to giving up Facebook. Each time after about a month (at most) I’ve given up. Why do I even bother? I don’t feel that bad when I break my resolutions but sometimes I wish I could do better.

In 2009, I decided that I was going to become a vegetarian. It seemed like the hip thing to do at my school. I have a lot of friends who are vegetarians, so I thought it would be easy to stop eating meat. Unfortunately there were a few problems. First, every morning I usually ate bacon with my waffle or egg. I love the smell of bacon sizzling on the skillet and I hated having to watch my family enjoy eating the little piggies. Second, every dinner I was tempted by the smell of pot roast or pork chops. I felt like a lion in a cage watching a pig taunt me. One day during the first week of the new year, they served pepperoni pizza at school and I mindlessly bit into a slice, enjoying the pepperoni. I even licked the grease off my fingers. I felt really bad when I realized I’d broken my resolution and I thought about spitting it out mid-chew but the pizza was too good. I accepted the fact that being a vegetarian wasn’t for me.

Determined to be a better student

In 2010, I tried something that didn’t require giving up food because I knew depriving myself of my favorite foods would be too hard. I promised to do my homework before Sunday night. As a freshman that year, I always waited to start my homework until Sunday evening or even Monday morning and often got incompletes on my homework. My parents were not too thrilled. So for my resolution I tried doing my homework during lunch the day it was assigned or as soon as I got home on Fridays. 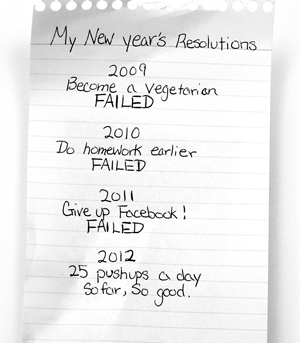 But about two weeks after school started, I realized doing my homework at lunch wasn’t a great idea because I always got distracted by all the fun I thought I was missing. I ended up with my book open but talking to my friends. Then about a month into the new year, I started hanging out on Friday nights and not doing my homework. After that I tried getting up on a Saturday morning and hitting the books, but I ended up reading the same line over and over. I was bored and felt like I had something better to do. After I answered one question, I would check my phone or send a text. This made homework take much longer and I eventually got bored and stopped. After that I went back to doing my homework on Sunday nights.

For last year’s resolution I was a 16-year-old sophomore, which meant I should have no problem keeping a resolution because I was practically an adult (I thought). I vowed to give up Facebook … at least until Easter, which seemed like an eternity. At the time I was addicted to Facebook. I used it on my cell phone and it was the most viewed site on my computer. I almost failed my first semester finals because I was on Facebook when I was supposed to be studying. I was the annoying person who every night had to tell all my Facebook friends “Good night” on my status.

So on Jan. 1, 2011, I temporarily deactivated my Facebook page. But I was still constantly picking up my phone hoping to see a notification, even though I couldn’t get any because I had deactivated my account. My mom said I looked like an addict having withdrawals! This lasted for almost three days. Around 9 p.m. on Jan. 3 my best friend called to tell me some gossip that I had no idea about because I hadn’t been on Facebook. I ran upstairs while we were still on the phone. I don’t think I could have reactivated my Facebook any quicker. I realize now how sad it was that I couldn’t stay away from Facebook for even three days.

Today, I look back at those massive failures and laugh. It is not as if doing my homework before Sunday was Mission: Impossible. I eventually figured out how to do my homework by turning off the TV and doing it the night it was assigned. And being a vegetarian is a nice thought because it seems healthy but I love meat. The Facebook goal wouldn’t be that challenging now. I have slowly become less attached to Facebook. I update my status only about once a week and I refuse to fail finals because of Facebook. I’ve learned that New Year’s resolutions aren’t meant to change your life, they’re just a nice tradition. It’s fun to challenge myself and find out how long I’ll last.

Although I’ve failed every resolution, I decided to try again this year by doing 25 push-ups every morning. So far I’m doing well but I’m not sure how long it will last.

l
Other stories by this writer:

I wish I were thinner. Trying to lose weight the unhealthy way didn’t work for 16-year-old Merryck. (May – June 2011)