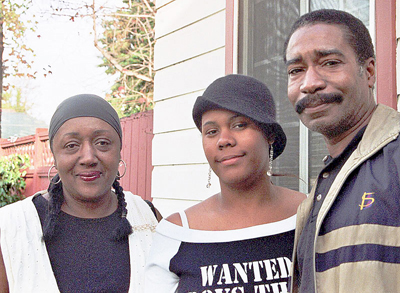 Jasmon smiles with her grandparents, who she calls mom and dad. Because she's lived with them since she was born, Jasmon doesn't think it's fair that the foster care system still has so much say over her life.
Photo by Caroline Golum, 17, Fairfax HS (Los Angeles)

I used to find myself at home on a Saturday night. Not because I was lonely, but because I was not allowed to go out when the cool parties started. See, I live with my grandparents but I’m also a ward of the court, meaning the courts have control of my freedom. Growing up, I wasn’t allowed to do a lot of innocent fun stuff because if the courts didn’t think my grandparents were taking good enough care of me, I could have been taken out of their home. Even though I didn’t get to go out much as a kid, I appreciate everything my grandparents have done for me.

I was born to a mother who wasn’t quite ready to care for a child, so my grandparents took me in. They raised me up just like I was their own child. I even called them mom and dad.

Around the time I turned 5 my mother came back to get custody of me, but I didn’t want to go because I was too adjusted to my grandparents. The court gave my mom weekend visitations, in which I would spend the weekend at her house. She kept up her weekend visitations off and on for about six years, but they ended when she lost custody of my two younger sisters. They went to a foster home, which is where you live with total strangers and maybe even other kids. About a year later my grandparents took my sisters in also.

This was the point in my life when things started to change. I was beginning middle school, where all the fun starts to happen. I started meeting new people and making a lot of friends. I was invited to sleepovers, parties and to the mall. But I wasn’t allowed to go because there wouldn’t be any parents there or I would be staying overnight. It felt like all my privileges were taken away before I could earn them.

When my grandparents said "I don’t think that’s a good idea" or "I’ll think about it," I would stomp and yell. Then my grandparents would punish me and I couldn’t talk on the phone for an hour or two. I thought they were saying no because they didn’t trust me being out on my own. But the truth was that they didn’t want me to go out because then I wouldn’t be under their watch and I might get hurt or in trouble. It’s not my fault that I didn’t understand. I didn’t know how strict the system was because me and my grandparents didn’t talk about it often.

A stranger in our lives

When you are in foster care there is always someone watching over you. Every month, a social worker would come over without calling and get me alone to ask me things. I guess the social workers were used to finding abused children who weren’t being taken care of at the other homes they visited, but they could never find anything wrong at my home. My grandparents did everything the way it was supposed to be, like fixing home-cooked meals every night, keeping the house spotless and smelling like Pine-Sol, and spending quality time with us. The social workers complimented my grandparents on how clean they kept the house and how healthy I was.

I didn’t like the social worker visits. To a little girl, being questioned was very painful and scary. Having to give a report on how my parents were treating me gave me a horrible feeling inside, like I wanted to shut down and not answer the questions, but I couldn’t.

After some visits with the social worker, I would ask my grandparents to adopt me. I thought if I was adopted, a social worker wouldn’t have to bother me once a month with the same questions. But my grandparents thought it was a bad idea because they wanted me to have my own identity, meaning my own last name, and access to services that are available to foster youth, like medical insurance. I get sick a lot and I have a lot of allergies, so without insurance my grandparents would have to pay for all of my expensive medicine on their own.

Many nights when my friends were at the movies, skating or out having fun, I’d stay home and play Go Fish with my grandpa. It was a lot harder in high school because the more activities that came up, the more I couldn’t do. Every summer my best friend would take a trip to Yosemite and I wanted to go, but I couldn’t. My friends went to late-night movies but I couldn’t go because we would be out after dark without adults. Most of the time I wouldn’t even ask to go because I already knew the answer. I would just go out with my friends during the day and see an early movie or have lunch.

I slowly came to realize that my grandparents wanted me to go out and do things, but it was also their job to protect me. Like if I was hanging out with the wrong crowd and got stopped by the police for the littlest thing, like a curfew violation, it would go into the police computer and the information would get back to my social worker. Then my grandma and grandpa could get in trouble and I could be removed and put into a foster home. Even though I understood, I would still get mad at my grandparents and blame them when they told me no.

One of the worst disappointments a teenage girl could face happened to me. Reyanna, my best friend, was turning 16, which is a very big deal for us ladies. She was having a birthday party that ended at midnight and after that there was to be a sleepover. I really wanted to stay over. My grandmother told me she would think about it.

I missed out, once again

Reyanna picked me up for the party in the morning and we spent all day setting up and getting dressed. Around the time the party started, I called my grandma to ask if I could spend the night, but she still said, "I’ll think about it." I decided to keep calling, even though I didn’t think she was going to say yes. Around 11 o’clock I called her again and no one answered. I called four more times and there was still no answer. By this time, I was ticked off! I finally called her on her cell phone and she told me she was on her way to get me. I was very upset with her. I got in the car and slammed the door and I sat there quiet the whole ride home. She said, "It’s not my fault" and "I wish the system wasn’t the horrible way it is."

She said that before I could visit Reyanna’s home overnight, the court requires her parents to go through a background check called Live-Scan to make sure they don’t have a criminal record. It was frustrating because I felt like I wasn’t being treated fair. Everyone else could stay the night and it wasn’t like I was going to do anything that would get me in trouble.

During my junior year my grandparents tried to give me a little more freedom because they knew I was getting older and they wanted me to do more. They started letting me have friends spend the night. Usually it was my best friend Reyanna and I watching our favorite movie, Riding in Cars with Boys, with some café latte ice cream and our bears Theo (mine) and Bear-rion (hers). While we were shooting the breeze, our friends and boyfriends would be out at the teen clubs.

Now I’m almost 18 and about to graduate. Since my case is about to close, which means I’ll no longer be in the foster care system, I’m doing even more. My life is great! I’m working three part-time jobs and going out on the weekends. I’ve been going skating with my friend Tatiana every Saturday night (even though she can’t skate, ha ha ha!). I usually come home around 11 p.m. just to keep my grandparents happy. I know they trust me because they aren’t as tough on me as they used to be. They don’t ask "Where are you going and who are you going with?" They are not as worried because they know college is something I really want and I wouldn’t jeopardize it by getting in trouble.

I don’t feel this experience has hurt me. Instead I’ve learned something from it. I appreciate the finer things in life, like the quality of going out. I think my friends who went out when they were younger didn’t appreciate it as much as I do, and that’s why most of them got in trouble with their parents. But for me, not being able to go out and do things helped me stay out of trouble. I also don’t regret that my grandparents didn’t adopt me because I’m going to get special benefits like money for college.

Still, children living with relatives should not have to be treated any different just because the title "foster child" has been placed on them. If the courts allow a foster child to live with a relative, it means that the relative has been interviewed and is enrolled in parenting classes, and that there is a safe environment for the child to live in. I believe the courts should be less strict because it is important to make the child feel at home. Relatives should have more things left up to their discretion. A phone call from a social worker or a visit every two months instead of every month would be better.

As a foster child growing up in my grandparents’ home, I felt very loved even though the rules kept me from having a normal childhood. My grandparents did all they could to make me happy, but it would have been easier if it was just me and them and not me, them and a social worker.

What would you do if you couldn’t live with your parents? That may be a very scary thought, but it’s a reality for some children. More than 2 million children in the United States live with their grandparents or other relatives because their biological parents have died or can no longer care for them. Some of those children have been adopted and are no longer in foster care. But other relatives chose not to adopt the children they are caring for. Some families may need the money they get from the government to help raise the child. Those families are like Jasmon’s, the author of this story. The child lives with a relative but is also in foster care, which is like having another set of parents watching over you. The youth are checked on by a social worker and follow special rules like asking the court for permission to go on out-of-state school trips. Some people, including some lawmakers, think that’s not fair. They think relatives should get money to raise a child without making them be in the foster care system. That way, they can feel more like a normal family.