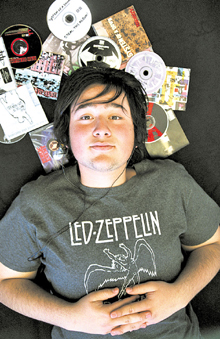 When was the last time you heard music that actually made you think? It’s not like you hear it on MTV, where "artists" sing about "getting tipsy," "groupie luv" and "getting low." Music used to be an art form, something that showed the personal opinions of the artists. It might relieve you to know that in today’s candy-coated world of music with TRL-style corporate pop and bubble gum rock, music with substance isn’t as hard to find as it may seem.

About four years ago, I started listening to older rock and punk bands like Rage Against the Machine, Bad Religion and the Dead Kennedys. I got turned on to them by the radio and friends. I loved the way the instruments and vocals had a real fast and furious sound. There was a rebellious tone in the music and I liked it. At first I didn’t pay much attention to the lyrics, until I started listening to the songs more often.

I heard the words "Zapata" and "Leonard Peltier" in Rage Against the Machine songs. I became curious, these names were new and mysterious to me. Why would anyone want to write a song about them? I knew this band was political, but I didn’t know what it was political about.

I started asking people questions and looking up these topics when I was stuck at home with nothing to do. I realized that Rage lyrics aren’t just words. They are protests against corporate greed, sweatshops and the oppression of human rights in Mexico. The songs started to mean something. I eventually understood this music and grew to like it for more than just its good sound.

I also discovered that aggressive punk bands like the Dead Kennedys and Pennywise sing about social problems like police injustice, discrimination against lower classes and censorship. Pennywise’s song "F*** Authority" was released to enrage not only censors, but the government as well. It also happens to be one of my favorite songs. I love its fast sound and blunt statement. The lyrics are very explicit, like "We’re sick of your treason, sick of your lies/ F*** no, we won’t listen, we’re gonna open your eyes."

A few months ago, I asked my mom who the Zapatistas were and what they were fighting for, because they had been mentioned in several Rage songs. She told me they were ancient Mayans from Mexico who are struggling for their human rights. Still, I wanted to know more. So I went to the Internet and researched them. I learned that when the Europeans colonized Mexico, the Zapatistas lost the right to live life the way they were used to. They lost land and are now secluded in a small area of Mexico called Chiapas. They are poorer than Mexicans who are descended from Europeans. They’ve become second-class citizens in their own country. I think this is important because I have Mayan blood on my mom’s side. I felt pretty disappointed that I was just learning this. In my AP Human Geography class in ninth grade, all we learned about the Mayans was that they lived in Mexico. Believe me, we didn’t learn about their 500-year struggle.

Learning by listening to music is a lot better than sitting in some boring class. I had a history teacher last year who could easily waste an hour of our lives by rambling on about his own personal experiences, like trips to Mexico he took. At some point it became repetitive and dull. I was so bored, by the time he got back to the lesson I was too disinterested to care about what he had to say. After the school year ended I felt really stupid for not learning anything. And not learning means you really don’t have an opinion.

You can use music for that purpose, to not feel stupid when someone else has something smart to say. It can be your motivation to understand better what goes on around the world. Unfortunately, today’s punk rock has been watered down by "pop-punk" and "emo" so there isn’t as much political outrage. But at least with these bands I’ve talked about, you can find your own opinions and express yourself.

The Dead Kennedys have made several songs about police injustice. In one song, "Holiday in Cambodia," they attack the police system by comparing it to the violent reign of Cambodian dictator Pol Pot, who killed anyone who didn’t agree with him.

Another band, System of a Down (which is more well known), uses straightforward lyrics to get its point across. In "Prison Song" they sing about how minimum drug sentences should be abolished to reduce the prison population. They sing, "Minor drug offenders fill your prisons, you don’t even flinch/ All our taxes paying for your wars against the new non-rich."

As I took a good look at the justice system, I noticed something: there are a lot of minorities in prison, and abuse of power by police is rampant. This is especially true when it comes to police brutality against minorities and the lower class. You hardly ever see a white guy get busted on the TV show COPS. Also, there are political prisoners such as Mumia Abu-Jamal and Leonard Peltier, and none of them are white. It just goes to show that racial profiling is alive and well.

Does everyone get a fair chance?

I also realized that minorities have it rough, especially when it comes to getting into a good college. Most of the people you see at colleges are white and rich because they have money and power. What about the rest of us? This hurts the chances of minorities and people from middle- and lower-class families, people who want to get into a good school like New York University and make a difference. Do you really think the Olsen twins would be going to NYU if they weren’t rich and famous? They probably would be lucky to get into Arizona State

Rock musicians aren’t the only ones making political statements. Hip-hop artists like Public Enemy and Tupac have taken a stand against racism. This kind of social voice goes all the way back to the 60s, when the Vietnam War raged on. Bob Dylan made protest songs a staple in his early albums, and Edwin Starr came out with his famous anthem, "War." This is probably a time of music that most teens don’t care about. After all, Bob Dylan is a folk musician who your parents would be more likely to listen to. Still, it is probably the most extreme time period when it comes to exercising the First Amendment—free speech—through music.

You don’t have to be a passionate musician or a political know-it-all to be moved. If all you have is a taste for music and a little curiosity, whether it is Tupac, Bad Religion or Bob Dylan, something out there will help you find your voice. Use it, because we all have a right to express what we think, and not enough teens speak up. As Bad Religion says in "Raise Your Voice," "Don’t be misled, you’ve got a lot on your head/ And nobody’s gonna pay attention when you are dead." (no offense to any potential Sun Devils).