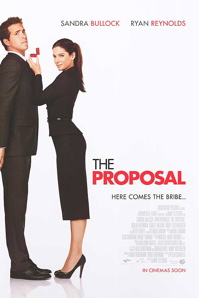 My mind told me not to see The Proposal, even though my girlfriend was begging me, but ultimately my heart said yes and the next thing I know, I’m sitting in a movie theater with my girlfriend, watching this latest chick flick.

The movie started out bad. In the first 15 minutes, we find out that Margaret Tate (Sandra Bullock) is the chief editor at a book company. The problem is, she’s from Toronto and her visa wasn’t approved and she has to go back to Canada. She’s desperate to stay in America, though, so she tells her boss that she is getting married to her assistant, Andrew Paxton (Ryan Reynolds). After that, Paxton says the only way he will agree to the marriage is if Tate makes him an editor. Then “the couple” goes to Sitka, Alaska, where his family lives, to tell his family he’s getting married. I guess Alaska works in the plot because it’s a place nobody really would want to go for a romantic getaway. To me, it just added to the cheap comedy that the director was trying to put in the movie. How funny to send Andrew and Margaret to the most random place anyone could think of, Alaska!

The rest of the movie is what you would expect. They don’t feel any attraction toward each other and they have to go through all these “funny” wedding preparations with Margaret trying on the Paxton family wedding dress that is too big in the chest area and with Andrew and Margaret both accidentally ending up naked on top of each other. And of course, while all of this goes on, Andrew and Margaret fall for each other slowly and then voila, the movie ends. How fun! NOT.

This movie was very predictable. I saw the trailer and soon learned that it was all I needed to see. Even the “cute” parts that my girlfriend had raved about were predictable. Right after Margaret left Alaska because she proclaimed Andrew deserved better, Andrew looked all over the house for her and ended up walking into the room they stayed in together. I whispered to my girlfriend, “She’s not going to be in the room and there’s going to be a note from the girl in there saying how wonderful the guy is.” Oh goodie, right again Kevin, right again.

It seems as though I’ve fallen victim for making my girlfriend happy again. I mean don’t get me wrong, I love making her happy. It makes me happy! But I hope next time making her happy doesn’t include a chick flick.