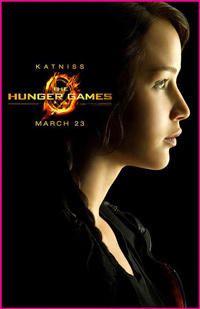 When I read the first book in the The Hunger Games trilogy in sixth grade, I couldn’t let go. From the action-packed fighting to imagining a situation in which your life is on the line, I had never read a book like that before. So when I heard that the movie was coming out, I knew I had to watch it. On Friday, I grabbed three of my friends and went to the movie theater right after school. The movie is nail-biting and kept me on the edge of my seat.

The Hunger Games takes place in the future in a deserted area. The Hunger Games festival is an annual event that calls forward a male and female above the age of 12 from each of the 12 districts. In these games, 24 tributes, or contestants, compete against each other in life or death situations, and only one will come out alive. As Effie Trinket, the escort of District 12, draws the names for the female tribute at the reaping, the tension grows. A girl named Primrose Everdeen is called to be the female tribute for the games, but her older sister Katniss (played by Jennifer Lawrence) bursts out from the crowd to volunteer to step in for her. As Katniss is about to head off to the Capitol for the games, she promises her little sister that she will win for her.

Lawrence played Katniss the way I imagined her in the book. She was fearless, bold, wise and deceiving. I imagined Haymitch to be much more helpful to Peeta and Katniss. In the movie Haymitch was more of a drunken mess. In the book, since Haymitch had previous experience in the games, he gave Peeta and Katniss a list of necessities and how to show the other tributes that she’s not going to go down without a fight. The main focus of the movie was the 24 contestants in the arena. The movie doesn’t really show the background of Katniss, Peeta or Gale, Katniss’s best friend. I think that the director focused on the violence too much. When the tributes first run into the arena there was blood splattering everywhere. The tributes stabbing each other seemed to add too much unnecessary gore.

Although I thought some scenes were not emphasized enough, the action pulled me in. My favorite parts were the action during the Hunger Games, the way Peeta and Katniss pretended to be in love and the scene when the Game Masters allowed Peeta and Katniss to be the victors instead of them committing suicide. And the moment when Rue, the young girl from District 11 who was like Prim to Katniss in the arena, died in Katniss’s arms was really touching.

For anybody who liked The Hunger Games book, you will love the movie, and may the odds be in your favor.

I got tickets for the midnight showing of The Hunger Games movie a month ago, because I had to be there opening night and I didn’t want the movie to sell out. After the action-packed movie was over, I agreed with the sold out audience of teens and adults that it was awesome.

The Hunger Games is set in a depressing future. Every year two kids (a girl and a boy) from each of the 12 districts are sent to the Capitol to fight for their lives in the Hunger Games. The games are entertainment for the people who live in the Capitol. Broadcasting the fighting shows the people in the districts that the Capitol has power over them. Katniss Everdeen (played by Jennifer Lawrence in an amazing performance) volunteers to go in place of her younger sister, Primrose. Katniss is determined to survive even though she doesn’t want to kill the other kids.

The filmmakers did a great job of re-creating some of my favorite parts of the book. In the book the people in the Capital wear different-colored wigs, dye their skin and tattoo their entire bodies. When I saw them on screen, they were exactly like what I had pictured in my mind.

One of my favorite relationships in the book is between Katniss and Cinna, who is Katniss’s costume designer. You would expect Katniss to treat Cinna coldly, because she treats everyone like that, but he becomes her only friend and person she trusts. Actors Lenny Kravitz (who plays Cinna) and Lawrence did a great job capturing the closeness of that relationship.

Another moment that was spot on was when Katniss shoots an arrow through the apple in the pig’s mouth. It was exactly how I had pictured in my head when I was reading the book.

The violent scenes were muted in the movie compared to the graphic imagery used by author Suzanne Collins in the book.

Even though I loved the movie, as an adaptation of one of my favorite books it wasn’t everything I had hoped. Obviously they couldn’t fit everything from the book into the movie, but there were details missing that they could have included.

The only big complaint I have is how they changed one part. Throughout the book Katniss had been trying to deny her feelings toward Peeta, another of the competitors in the Hunger Games. One of my favorite moments is when Katniss yells out Peeta’s name revealing her true feelings. This was a “whoa moment” in the book because Katniss was hiding from two people trying to kill her and by screaming his name she risked getting caught. While I was reading the book, I had been wanting her to express how much she cared for him and when she finally did I felt relieved. In the movie she only whispered to herself. I wanted her to yell it out like in the book. Being so guarded about it, wasn’t as satisfying.

I know I’m lucky that my mom was willing to go with me to a midnight showing on a school night. None of my friends who wanted to see it at midnight had parents who would let them. I only slept two hours before going to school Friday but it was way worth it.