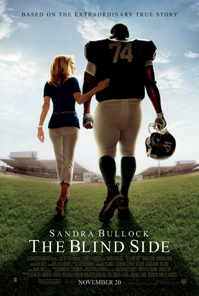 I expected The Blind Side to be a typical, heartwarming movie with a predictable ending. And that is exactly I got. Even though none of the scenes were surprising, I enjoyed the movie, which is based on a true story.

Big Mike (Quinton Aaron) is a troubled teenager in need of a stable household. His father is absent from his life while his mother is addicted to drugs and he is essentially homeless. Thanks to Michael’s big build and height, a coach from a private school gets him admitted to the school, hoping that he will become a football star. The Tuohy family, whose kids go to the same private school, notice that Michael has nowhere to stay, and the family decides to let him sleep at their house for a few days. Those few days somehow turn into Michael becoming part of the Tuohy family. It was surprising to see the family taking a leap of faith and letting a complete stranger move in.

As he spends time with the family, he transforms from quiet, lonely and reserved into confident, protecting and strong. Michael, who has never played football before, starts unsuccessfully. The mother, Leigh Ann Tuohy (Sandra Bullock), makes it her responsibility to make sure Michael succeeds in sports and in life. She helps nurture him into one of the most recruited players after just one season. Despite the randomness of him becoming part of the Tuohy family, he quickly becomes a wonderful son and brother. When Michael and S.J., the Tuohy’s son, get into a car accident, Michael prevents the airbag from hurting S.J. by blocking it with his arm. Michael’s selflessness is very sweet.

The Blind Side reminded me why I love watching family movies, despite their predictable endings. I realized that I watch movies not to get surprised by an improbable ending, but to laugh, see touching moments and leave the theater with a happy feeling. I definitely recommend this movie to anyone who wants a feel-good movie for the holidays!