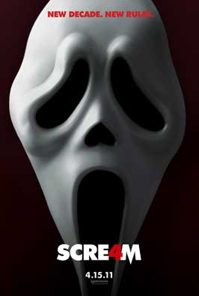 I thought Scream 4 was going to be lame and boring. I really liked Scream 2 and 3; they were good combinations of scares and laughs. I didn’t think that the new cast members would live up to the older cast and with 11 years passing between the last movie and Scream 4, I was worried that it wouldn’t be original.

But unexpectedly it was very good. The newer cast members, like Emma Roberts, Hayden Panettiere and Justin Brandt, were great. And the scares were real. I wimped out and covered my face three times. I also enjoyed the gruesome killings. The blood on the walls and intestines coming out made everything scarier. It was so much more than just Ghostface slitting victims’ throats with a sharp knife, like in the other movies.

In this movie Sidney Prescott (played once again by Neve Campbell) returns to her hometown of Woodsboro for the last stop on her book tour. The day before, two girls from Woodsboro High were murdered in their home after they got a call from the familiar voice we’ve heard in the previous movies. Police find the phone used to make the call, which is smeared with blood, in the trunk of Sidney’s rental car. Sidney is then a suspect. But Dewey (David Arquette from the first three movies), who is now the sheriff, thinks Sidney could be the next victim, along with her niece, Jill (played by Emma Roberts) and a few of Jill’s friends since they’ve all received a call from the strange voice. Soon they realize everyone is in danger and Dewey, Gale (played again by Courtney Cox) and Sidney try to find the true killer.

In addition to the scares, the movie has some funny moments related to the acting. There were a few scenes during the movie that got the whole audience laughing, but you couldn’t tell whether the movie was trying to be funny or if Emma Roberts was just a terrible actress when she was running for her life as Ghostface was trying to kill her. Her screams just didn’t make it sound like she was in danger.

Every person who I thought was the killer turned out not to be. So toward the end of the film when the killer is unveiled I was totally surprised. It was the last person I thought it would be.