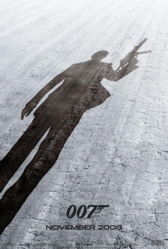 I love James Bond films. It doesn’t matter if its 1962’s Dr. No or 2006’s Casino Royale, I love them all. And while each new Bond brings his own interpretation, three aspects of this legendary character must remain the same: his wit, his style and his ability to get out of a seemingly impossible situation. It is a balanced combination of these qualities that has for decades earned the love and devotion of Bond fans everywhere. Lacking all but strength, the Bond in Quantum of Solace did not hold up to the standard fans are used to. Maybe if I weren’t such a Bond fan, I wouldn’t have been so disappointed.

In Casino Royale, Daniel Craig’s first time playing Bond, his portrayal was colder than others have been, even mysterious. By his saying less, I felt I had to watch him closer to get the whole story. There was a certain sadness behind his cocky charm that other Bonds covered up. He brought Bond down to earth, showing that emotionally he was just a man, while at the same time keeping that physical strength. But something was different in this film.

In Quantum of Solace, it appeared the filmmakers were torn between creating a new Bond that was darker and more isolated, and following the tradition of the Bond we know. It was as if they felt it necessary to use a formula in which there must be at least one sex scene, car chase and reference to a vodka martini. But these gimmicks are not what make up James Bond, and certainly not in the way in which they were delivered. In the one, obviously contrived, sex scene of the film, Bond takes one look at a female assistant he’d just met and next thing you know they’re both in bed. All I could think was, "Really? One look and that’s it?" People aren’t amused by his having sex; it’s his charm and the way he woos women that separate him from the average guy.

This film centered more on Bond’s blatant aggression than his wit. Quantum of Solace was an action film, and not a very good one. There are only so many ways in which you can beat someone up before your audience starts getting bored. From a three-minute knife fight to knocking a man off his motorcycle to running people over with a boat, each of these segments could provide enough action for one movie on their own, let alone all of them squeezed into one film.

But the action wasn’t the only thing I found boring, it was the villain too. A villain is supposed to be someone I hate. In Quantum of Solace, the villain, the head of a corporation with a scheme to get a hold of natural resources to gain power, was just someone I disliked. I guess because he was a modern day villain, the kind of greedy CEO we hear about on the nightly news who could care less about his workers. Yes he was evil, but not to the extent that other villains have been. It was too subtle. He just didn’t seem like a suitable match for Bond. He was dull. The whole movie was dull.

Usually after watching a Bond movie, I could turn to the person who I saw it with and toss out a couple of funny lines I remembered from the movie. This time, there were none. The movie turned Bond into nothing more than a trained assassin. He was Jason Bourne, only without the interesting plot. What Bourne lacks in humor and charm, he makes up for in an intensity brought along by the complexities of his past. Bond has no such past. He needs the eccentric personality to keep us watching. Therefore, I can’t say that the character in Quantum of Solace was much like either Bond or Bourne, but laid dully somewhere in between.