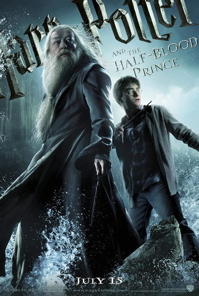 It’s been two years but the latest movie installment of the Harry Potter franchise was worth the wait. The main characters grow up and have romances but also still have to battle Voldemort. I’ve grown up with these characters—Harry Potter was my first and favorite book series; and seeing them again is comforting even if they are wizards and I’m a “Muggle.”

They had to take a lot out from the book, but the important parts were included. In this movie, the sixth in the series, the magical war is spreading into the Muggle world, which would be terrifying in real life. But it started out a little too action-flicky, when Lord Voldemort’s Death Eaters tear down a bridge in London that a crowd of Muggles (non-magical people) are on. It hurt my eyes to watch the Death Eaters’ black cloaks spiral around.

After the opening, though, Harry, Hermione Granger and Ron Weasley—the characters I know and love—are finally reunited at Hogwarts, their magical school. Harry is captain of the Quidditch team and Hermione is still a teacher’s pet. There is also comedy in the movie, especially between Hermione and Ron, who clearly have sexual tension but aren’t dating. Ron instead starts dating Lavender, a psycho, after she makes out with him in front of the whole Gryffindor house. And Cormac McLaggen, a hunky Quidditch player, tries to woo Hermione. Harry is pining over Ginny Weasley, who is out of bounds because she is Ron’s sister. I liked that there was some romantic comedy in this movie because it lightened the mood of approaching evil (Voldemort). The characters’ attempts at romance made them more relatable—they were regular teenagers, not wizards.

But it’s not all ice cream parties and flirting in the magical world. Harry’s rival Draco Malfoy has a secret cabinet connected to someone, or something, on the other end. Before leaving for Hogwarts, the best friends suspect something weird is happening with Draco, who is also the son of a Death Eater. Draco becomes dangerous in this movie and is more of a bad guy.

During the year, Dumbledore tutors Harry privately about Tom Riddle, a.k.a. Voldemort when he was a student. Dumbledore’s goal is to help Harry defeat Voldemort.

Draco’s cabinet is meaningful in the ending, which includes wizards dueling at Hogwarts. But despite all the tension, the ending was a little disappointing. The ending that made the Half Blood Prince such a shocking book didn’t work well in the movie, because I already knew and it felt too abrupt. I left the theater wanting to watch the last two movies right away.

I think everyone will like Harry Potter and the Half-Blood Prince, because it has romance, comedy and suspense.