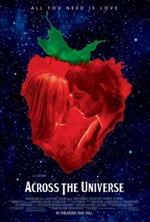 Do you sometimes wish you could have lived at least one day during that spectacular summer of love? Do you have a love for artists such as The Beatles, Jimi Hendrix and Janis Joplin? If you answered yes to either question then Across the Universe is the perfect movie for you. I fell in love with this movie because of its moving music and unique characters.

In Across the Universe, director Julie Taymor brings the classic music of The Beatles to life through a musical set in the 60s. We are immersed in the life of Jude, a young immigrant from Liverpool, England. Jude (Jim Sturgess) immediately falls in love with a student, Lucy (Evan Rachel Wood). (Their names are taken from The Beatles songs “Hey Jude” and “Lucy in the Sky with Diamonds.”) Jude and Lucy’s love is not captured through typical dialogue but through Beatles tunes such as “I’ve Just Seen a Face” and “All My Loving.” The movie uses 33 Beatles songs to communicate the different emotions of the characters.

Taymor does a great job bringing the lyrics to life. Every scene has the mood The Beatles were trying to create in their music. There is only about 30 minutes of dialogue. This lack of dialogue makes it possible to get completely lost in the movie; it almost makes it seem as though you are lost in your own imaginary world.

The brilliance of Across the Universe is that even though it takes place during the prime of acid youth, an era when the hallucinogenic LSD played a strong role in the decisions and lifestyles of young adults, the movie includes historical events such as the Kent State riot, the murder of Martin Luther King Jr. and the Vietnam War. One of the best parts of this movie is the powerful characters. I assumed that life in the 60s was full of the glamour of music and standing up for rights. However, Jude shows that living in the 60s was an emotional rollercoaster—dealing with clashing political views, a tense racial environment and an addiction-filled culture, which made it hard to stay true to one’s priorities.

Celebrities Selma Hayek and Bono make essential contributions to the movie with their performances of “Happiness Is a Warm Gun” and “I Am the Walrus.” The celebrity appearances were another thing I really liked because it showed how many actors wanted to take part in the Beatles magic. Another thing I enjoyed is how Jude’s New York roommates, Sadie and JoJo, are based off the legendary Janice Joplin and Jimi Hendrix.

By far the strongest quality of the movie is how the music is able to send chills down your body. The combination of imagery, music and bringing some of the best lyrics to life makes it extremely difficult not to have a smile on your face the entire movie.

The best part of the film was the closing scene, a powerful performance of “All You Need Is Love,” which mimics The Beatles’s last live performance. It was a moving tribute. If you couldn’t already tell, I strongly recommend Across the Universe to anyone who likes The Beatles or who is curious to understand how powerful music can truly be.

A version of this review first appeared in the Marymount HS newspaper, The Anchor.