I grew up reading comic books. They take you away from crap. Your parents are fighting in the living room or whatever, and comic books take you away from all that. Whether I was bored in math class or there was nothing on TV, a comic book could help me zone out to a different world, like I was watching a movie in my head.

So to be able to go to a comic book convention was my dream. I wanted to be able to meet all the artists whose work helped me out and inspired me throughout the years, to be able to thank them.

When I set foot into the Wizard World convention in Long Beach, I was overwhelmed by the crowds and the tables full of comic books, toys and T-shirts for sale. I was like, Where do I start? I wanted to see everything there was to see. Everywhere, I saw comic book artists signing stuff—artists I didn’t even know. Next to a huge statue of the Hulk, there was a guy dressed as Wolverine from the X-Men, a Storm Trooper, and some girl with green hair and a big gun—I haven’t figured out which character she was yet.

At one end of the hall, people were lined up to get autographs from Stan "The Man" Lee—creator of Spider-Man, X-Men and every miracle of a comic book ever! I caught a glimpse of him, the father of comic books. Nearby, I got two posters for the unbelievable film Sin City, which was based on a comic book by Frank Miller that was even better than the movie.
At Wizard World, it was cool to be a comic book freak. It was nice to see that comics are coming out of the basement and into mainstream culture with huge movies like Spider-Man and Sin City. Comic books are not such a geeky thing anymore. 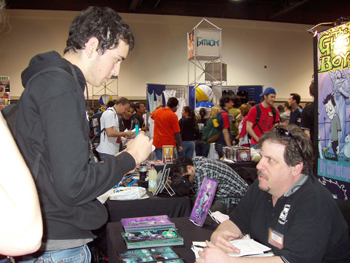 Larry was thrilled to meet Dan Vado, the head of his favorite comic label, Slave Labor Graphics, at the Wizard World comic book convention in Long Beach in March.
Photograph by Nicole Chi, 16

While walking around I stumbled upon the Slave Labor Graphics tables—that’s the label that publishes my favorite comic books like Lenore, Johnny the Homicidal Maniac and Ghouly Boys. There was a guy sitting behind the table who I thought was an employee selling T-shirts. I happened to look at his name tag and it said "Dan Vado." My eyes lit up and without thinking I stretched my arm out. I had to shake the hand of the guy in charge of the whole label! The Big Cheese. He picks which comic books get published. As I tried to talk to him, I started getting red and sweating profusely. But he was very nice and patiently answered my questions about how to become a comic book artist.

There were artists trying to make it

After this nerve-wracking interview, I watched as a young man showed his portfolio to Vado. Vado took a long professional look throughout the whole portfolio, and told him the hard truth: to find his own style. He said that most of the cartoons look like he’s trying to imitate other comic book artists.

I trailed after the artist and got to know him a little. It was inspiring to meet Edward Van Camp, 25, a struggling artist who sketches at night after work and hopes to make it in the industry. I could see myself doing that some day.

Then I spotted Roman Dirge, who draws the amazingly hilarious Lenore comic books. I wanted to impress him with my dazzling knowledge of his comic books and professional interviewing skills, but my mind went blank. I awkwardly mumbled a question and he couldn’t understand me. "Project your voice," he advised.

As I handed over my copy of Lenore for him to sign, he asked what character I wanted him to draw. I know the comic book from front to back, but at that moment, I couldn’t think of anything. "Uuuuhhhh…" I muttered.

"Um … sorry for putting you on the spot. I’ll draw Lenore for now," he said. Oh yeah—the title of the damn comic! He was really nice about it, even though I was acting like a creepy, crazy fan. It was funny how nervous I was. I still laugh when I think about it.

But the high point was attending a question-and-answer session with my hero, Kevin Smith, who wrote and directed such great films as Jay and Silent Bob Strike Back, Clerks and Dogma. I have watched his films so many times over the years, seeing him in person was like seeing an old friend. Even though he’s a successful filmmaker, he was still like one of the guys, joking around, making fun of himself and his fans, and telling great stories about the film industry.

Of course, if you ask Kevin a question, be careful, because you never know how he might answer. One fan asked, "If you could have any superhero power, what would it be?"

He said, "The power to sit through stupid f***ing questions."

His advice to young writers and filmmakers: write what
matters to you; write what you care about; and don’t worry about what other people think.

I wish I could just live in a giant comic book convention, surrounded by the people I most admire and great comic books and movies. I can’t wait for the next one.

Click here to check out the Wizard World photo gallery.

—Have a nicely put together portfolio. Don’t just gather a bunch of sketches, make it look professional. "Even if the stuff is crap, I’ll sit there and give it the benefit of the doubt," he said.

—Be serious about your work; create your own private work area at home and dedicate time to your work.

—Asked about education, Vado said that you don’t need any formal art training. "But I don’t think anyone should NOT have an education. Your art improves whenever you learn about things, whatever it may be."