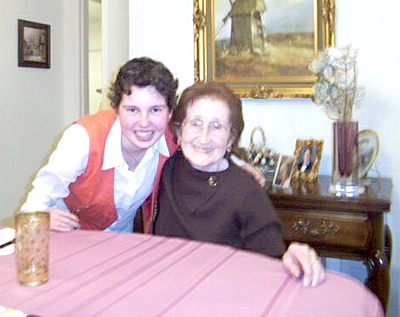 I want to tell you the story of an amazing woman. But before I tell you about Ludmila Page, I have to tell you about Oskar Schindler, the man who saved her life. The true story of how Oskar Schindler saved the lives of more than 1,000 Jews during the Holocaust was made famous by Steven Spielberg’s film, Schindler’s List. The film describes how Schindler convinced the Nazis to spare the lives of certain Jews so they could work in his factory, making ammunition and other things that the Germans needed during World War II.

It’s hard to know what to think about Schindler. It seems like for every person who called Schindler an angel of mercy, there’s someone else who thinks he was in it for himself. His supporters say that he was a great man who risked his own life and reputation to help the Jews. But others say that Schindler belonged to the Nazi Party, that he was a womanizer, an excessive drinker, and a war profiteer, who was just trying to make a buck off the Jews’ suffering. I guess that could be true, but if he hadn’t saved them, who would have?

There is a framed photo of Schindler on the TV in Ludmila Page’s bedroom in Beverly Hills. She looks at it every morning when she wakes up and every night when she goes to bed. She gives him respect because he’s the one who has enabled her to tell her grandchildren: "There are good people in this world." He’s the one who helped her survive the nightmare of World War II, when so many others died.

Because Schindler saved their lives, Ludmila and her husband Poldek were determined that the story of how he saved people should be told. Two decades ago, Mr. Page convinced an author to write a book on the subject—Thomas Kenneally’s Schindler’s List—and then pestered Steven Spielberg to make it into a movie.

At the Academy Awards in 1993, Schindler’s List won seven Academy Awards, including Best Picture. Poldek and Ludmila were standing onstage next to Steven Spielberg when he acknowledged that it was due to their inspiration and persistence that this movie was produced. As I watched the awards ceremony on TV, I remember feeling so proud to know them. My parents had always been in touch with the Pages because my grandfather, who also survived the Holocaust, had grown up with Mr. Page. The Pages, who started a briefcase shop in Beverly Hills after the war, often attended my dad’s film screenings or my poetry readings where they encouraged me and told me to pursue my dreams.

So when my history teacher asked us to interview people who came of age during World War II, I immediately thought of Ludmila Page. (Mr. Page passed away in 2001.) I feel immense respect and gratitude that she survived. She shows me that there is life after a war. There is a life after such tremendous suffering and loss.

I hoped that my interview would do a better job of remembering the Holocaust than my history teacher had done when he covered it in 20 minutes. He showed pictures of famished bodies and displays of shoes and eyeglasses from those who died, and that was about it. I respect my teacher, but it was ridiculous. The Holocaust was an event that destroyed millions of families, devastated land and completely changed the power structure of the world. I thought it deserved more attention. I believe that if history has taught anything, it is to be skeptical of the information you receive. We can’t just accept the information our teacher gives or what our history book preaches to us.

I know a lot of teens think history is just a boring class, but you really get into history when you’re interviewing a real person who’s lived through the Holocaust. It was chilling to see how narrowly Ludmila Page and her husband escaped death, but it was also inspirational to see how her faith kept her going, and how her love for her husband, which began in the middle of a war, stayed strong all those years.

What was life like before the war?
Ludmila Page: I was born in Romania in 1923. My mother was Russian and my father was Polish. They were both physicians working at a Russian hospital. I had a lovely life. I had a lovely family. I was the only child. I had French lessons. I had a governess who taught me French. I was not allowed to speak Polish with her. I went ice-skating. I was one of the best students. I would be recommended by my teachers to tutor other students. Life was wonderful.

The Nazis forced your family to leave your home and live in a Jewish ghetto in Krakow. What was life like in the ghetto?
1941 to 1943 were the worst years of my life. A huge wall barricaded us in. We took only what we had on ourselves. We had rations. We were packed in and we lived in very demeaning conditions.

During that time, you and your husband began working for Oskar Schindler’s factory. Schindler saved you and other workers from deportation to the death camps, by telling the Nazis that he needed your free labor. How many Jews did Schindler save?
He saved 1,200 Jews. It is such a little number since 6 million Jews perished in the war.

Did those who survived stay in touch with each other?
Yes, we kept in touch and still do.

Did Schindler have any regrets of not saving more?
Yes, he regretted it so much. He always kept thinking, "Why not more?"

How were you able to survive during the war with the knowledge of so much suffering?
I just lived day by day. The Germans knew what they were doing. They were so organized. As most of the Jews in Poland, we thought that the war would be over in three months but it wasn’t. The worst thing was that our closest family was not there anymore for us; they were all deported and murdered.

So after the war, you came to America, right?
One of Poldek’s friends convinced us to move to California and open up a store in California. He knew how to repair handbags and taught Poldek. One of our neighbors in New York loaned us $5,000 to open our own store. Poldek knew he wanted it to open in Beverly Hills.

So one day Thomas Keneally walks through the door.
For many years, Poldek was telling the Schindler’s list story to all the customers. He continued our survival story in his story and wanted the whole world to know about it. In 1980, Thomas arrived in Beverly Hills and asked about the prices of briefcases. Beneath Poldek’s shelves of imported Italian leather goods, he first heard of Schindler through Poldek’s stories.

On this hot day in our handbag shop the idea for a book about Schindlers’ Jews was born. All the writers always wanted money but Thomas Keneally wanted none. Excited into writing, Thomas Keneally then got some advance money from Simon & Schuster. Poldek introduced him to the survivors around the world; they traveled together to Germany, Israel and Poland interviewing Schindlers Jews. Finally in 1982, the book Schindler’s List was published.

So then Spielberg gets a hold of the book. Correct?
In the 1980’s, the head of the Universal Studios was Mr. Sidney Scheinberg. Mr. Scheinberg read the book and was very much impressed by the book. So he sent it to Steven Spielberg and said that he needs to read the book. He said it would be a good film. Spielberg said he didn’t want to do it because he said he wasn’t mature enough for the subject matter. It took 10 years of Poldek’s persistence and zeal in convincing Spielberg that he was the only director in the world who could direct this movie. Finally, Spielberg agreed.

Did he need advice from you or Poldek on locations?
At first, Spielberg wanted to do the film in Yugoslavia/Slovakia. But Poldek told him if he wanted to do a realistic film than he should do it in Poland. He told him that this is [the] perfect place because the Jewish blood was spilled here. Spielberg went to Poland to check out conditions and possibilities. He was extremely impressed.

When the movie came out, how did that make you feel?
It was a sad tragic experience but on the other hand it was wonderful. We always talked to our kids about Schindler but other survivors did not because it was too painful. They were afraid of exposing their children to such horrendous acts. After the book came out, the parents opened up. The children’s parents and grandparents started telling their stories of surviving the Holocaust.

After the film won seven Oscars, Spielberg thanked Poldek and you for helping the story to be told.
It was a gratifying moment for Poldek because he put so much effort and work into it.

Do you have a special message for young people?
They should grow up without any prejudice or bigotry toward people, to understand people, to think how lucky we are and respect people, whatever race and religion.