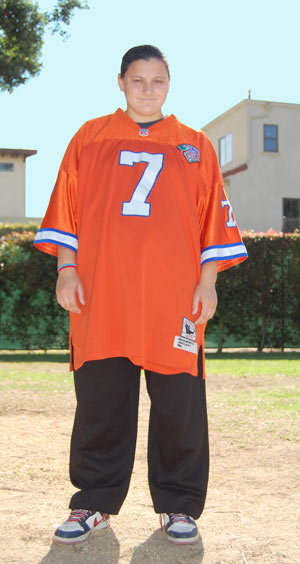 Sara says life has taught her many lessons and now she’s working toward building a better future for herself.

Growing up I did crazy things, like break windows. I thought what I did was funny. I didn’t think my behavior would affect my future, but it did.

I had hard times growing up. When I was a baby my siblings and I were taken away from our parents because they couldn’t take care of us. We went to live with guardians. I saw my guardians as real parents and I had fun living with them but I was acting out too much. I was impatient and couldn’t sit still. I’d get Saturday school because I wasn’t listening to the teacher. I was doing stuff I wasn’t supposed to do, like going on inappropriate websites. I thought I was doing things any other kid would do but I was taken away from them when I was 11 because they couldn’t handle me.

My behavior got worse when I left my guardians’ house. I missed them so I didn’t care about trying to behave anymore. I went to three foster homes in one year. It was hard to move around, having to get adjusted to so many people. When I was 12 I was sent to my first group home, which is a home where you live with other kids and adult staff members when you can’t handle a foster home. I’d get in trouble for running away. I got kicked out a year later. I didn’t want to leave. The staff members were my friends. One let me hold her keys and hung out with me. I had called her mom.

At my new group home, I called and talked to some of the staff at my old group home. They told me they were going to come visit me but they never came. I wished I had people visiting me. The other girls would have their families pick them up on the weekends. I didn’t have any family in my life at the time. I was sad about it.

I didn’t like school so I was always acting up. Sometimes I’d walk up and down the hallways, disturbing the classes. One time I ran away from school and found a shopping cart on the sidewalk. It was calling my name. I brought it all the way up the street back to school. I was going to run down the hallway with it. I thought, “I’m going to go disrupt the class. I’m going to have fun. Whoo!” But when I got to school, the school staff locked the door before I got in so I pushed it up and down the street instead. I thought it was the funniest thing to do instead of being in school.

I didn’t care about getting in trouble. I did something bad every day but there were no consequences. I still got to do stuff, like go to Dodgers games, the pool and the park.

Then one day I was tapping a loose window and accidentally broke it and my hand started to bleed. I got a kick out of it. After that I realized I liked to break windows.

The first time I broke a window on purpose, using a rock, the staff ran after me. I ran around the group home. It was funny. It was like a police chase. Then one of them grabbed me. Three or four staff threw me on the ground and held me down until I was calm. As punishment I had an earlier bedtime.

Getting in trouble was a joke to me

There were big rocks out in the yard. Every day I would pick out a window, find a rock and throw it at the window. I liked to see them fix the windows over and over. I thought, “That’s so funny. They have to replace it. I don’t have any money to replace it.” The girls knew when they heard a window shatter, that was me. The staff would chase me and I liked getting attention from them. I’d get in trouble but it wasn’t bad.

One day one of the staff members sat down and talked to me. She said she wanted to quit because she was tired of restraining me. I felt bad because I didn’t want anybody to lose their job over me. I liked her. I was surprised. I was too busy doing what I wanted to do to see that my actions were making it hard on the staff. After that, I tried to act better but I couldn’t. It was just so much fun.

I was so out of control that I went to the mental hospital. One day I was upset and I wanted to run away so I walked to the liquor store. I walked back to the group home drinking a Hawaiian Punch. I whipped out a razor I had stuck in my pocket and I tried to break it open to get the blade out. To scare the staff, I was going to act like I was going to cut myself, just small scratches, not deep. When I got back to the group home they saw the razor and a bunch of the staff tried to take me down on the grass. I was forcing them off of me, then more staff had to hold me down and control me. They had to call an ambulance. “I’m not going,” I screamed. I was scared. They put me on the stretcher and strapped my arms.

I was there for a week. My group home staff picked me up and took me back. They sent me to a mental hospital two more times because I was out of control and doing things that were dangerous, like running around with a pair of scissors. The third time I went to the hospital, after I’d been at my group home for a year and a half, they didn’t let me come back. When the people from my new group home came to pick me up I was pissed. I thought my old staff had rejected me. I was going to miss some of them.

I needed more rules to help me behave

I came to my new group home, called Star View, in October 2006 when I was 15 years old. It’s a stricter group home with locked doors and a lot of rules where teens get sent to get help with their problems, like anger or behavior. I finally changed when I got here. Before I hadn’t been ready.

But I wasn’t ready to change right away. Star View has windows all down the hallway. I walked down the hallway, hitting the windows, boom, boom, boom. I was testing them. It wasn’t glass. I had to examine them because they looked thick. They were plexiglass. I couldn’t break them.

But I found other ways to get into trouble. I threw chairs and I got slammed on the floor by the staff. When I got mad at the other kids or punched a hole in the wall, I’d get sent to the timeout room, a blue room with carpet on the walls. They put you in the room, close the door and leave you until you calm down. I was sometimes in there for four hours. It made me more frustrated. I would bang on the windows and kick the door. They would come back and take off my shoes. Different times I ripped off the bottom of my T-shirt. I wrapped it around my neck and tied it in knots over and over. I was mad and wasn’t thinking about what I was doing. I didn’t want to hurt myself. The big male staff would come in the room and rip the T-shirt off my neck. I would have a red mark on my neck. I felt upset at myself because I did a stupid thing.

At Star View, it wasn’t fun to mess around. My old group home didn’t have a timeout room. They had to hold me until I calmed down. And I got to go on the day trips even if I got in trouble. But at Star View if I acted up I didn’t get to go anywhere. It was tough getting in trouble.

A year and a half after being at Star View, I got back in contact with my family. I saw my sister and my guardian, who I call my mom because I lived with her for many years. She said, “I love you.” I felt happy because I thought I was never going to talk to her again. But they said I couldn’t live with her because I needed to be good. My mom would always visit me. She told me to do good and not get in trouble. She said she wanted me to get out of my group home.

If I was good they would let me visit my mom on the weekends. We watched movies and ate junk food. Those visits helped me stay out of trouble because I had someone in my life to see. I would feel bad if my family wanted to see me and I let them down because I got in trouble.
The staff helped me behave better. When I would get mad at somebody and want to fight them, Dee would tell me to calm down and “breathe in and out.” It helped.

The staff talked to me. They asked questions like, “What’s wrong?” and “How was your visit with your family?” They were asking about things that I liked. It made me happy. I didn’t have my family by my side but I felt like I had family—the staff—in my life.

I’d tell the staff if someone was bothering me. They’d tell me to ignore them. I’d listen to them and I wouldn’t get in trouble. One time when I picked up sharp pieces of plastic outside in the gated area, Vernice, a counselor, told me, “Hand it over and don’t come inside with it because people could get hurt.” I listened to her and I handed the pieces over. I was happy I didn’t make it a bigger situation and get my privileges taken away, like going on outings.

I got support and encouragement

I want to shout out to all the staff—Dee, Vernice, Michael T., Mark, Jazz, Joel B. my therapist, Leah my old therapist, Stephanie, Vicky, Princess, Debbie M. and my teacher Mr. Grady. They’ve all supported me. After I got in trouble once, I did good for a whole week. Vicky brought me Denny’s. If it weren’t for them I would have given up and not cared.

I don’t get in trouble or go to the timeout room that much anymore. I feel good that I’ve improved. I’m trying to grow up.

Now that I’m 18, I want to live in transitional housing, which is an apartment where you live on your own and the system pays for it. I want to live near my guardians so they’ll be able to see me more. I’m an auntie. I need to improve for my sister and her baby, for my family, so I won’t end up in an adult facility and mess up my life.

I regret everything I did. Don’t act bad because then you’ll regret it. Don’t always react. Think before the consequences are coming your way. Don’t mess up your future. I wish I didn’t do the things I did so that I would have never been at Star View or my other group homes and I could still be with my guardians. I think about that every day. Why am I here? Then again I’ve met all these people that came in my life and I’m happy for that too.