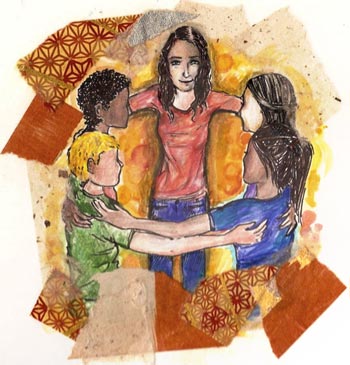 I was born with a physical disability. Three of my fingers on my left hand are very small. It’s hard to hold things, like my tray at lunch, and I need people to help me to do stuff like make my bed and carry my laundry basket.

In elementary school, the kids would tease me about my hand almost every day. I used to go home and tell my mom the kids were making fun of me and cry. My mom would meet with my teachers to try to solve it, but it didn’t help. The kids just thought I was a snitch. I wanted friends but the only kid who played with me was this boy who took me by the hand one day and we started jumping rope.

What made me feel worse was that my dad left when I was a kid. I thought he left because of my hand. I thought nobody loved me. Sometimes I prayed, “Please God, make me a new life.” But it didn’t work.

I wished that the people who were bullying me would understand that it hurts to be bullied. When I was in fifth grade the kids were saying a boy wouldn’t like me because of my hand unless I kissed him. I didn’t want to do it. “Ha ha, he doesn’t like you because of your hand.” I was so red.

I couldn’t handle it anymore. I went up the stairs and walked to the railing. I was hanging onto the rails and was about to jump. The school therapist ran over and said, “Calm down, everything’s going to be all right.” It made me angry. I didn’t believe him. Then the cops came and grabbed my wrists and helped me down.

I went to a mental hospital for two weeks. When I left, the hospital recommended that I go to a new school. It was smaller. I didn’t get teased and it was fun. I was there for one month. At my fifth grade graduation we sang R. Kelly’s “I Believe I Can Fly” and Vitamin C’s “Graduation (Friends Forever).”

For middle school, I went to a special ed school. I liked it at first. There were fewer kids, 15-20 in a classroom instead of 30. When I got there the kids asked, “What’s your name?” “Do you want to eat lunch with us?” Then after a month the kids started being mean. I think it was because new kids came and the school started getting crowded. The boys would say, “Look at her hand. She’s weird.”

One girl was a bully. She would trip and de-pants people. I stayed away from her when I’d see her. But she’d still come over and call me Frankenstein and Freddy Krueger. Sometimes I’d tell her to stop but she wouldn’t. It went on and on. She would whisper it in class. And then the other kids would call me that. The worst was when I was talking to a boy I liked and all of a sudden the girl pulled down my shorts. The boy saw my underwear and started laughing. I went to the locker room and covered my face.

I kept my hurt feelings inside

Then one day I was sent to the principal’s office and I didn’t know why. He said, “Let me see your cell phone.” I asked, “What’s going on?”  “Someone said you sent an inappropriate message to him.” There was a nasty message sent to me from a classmate about having phone sex. They were trying to get me in trouble. The kids who sent me the message and I got suspended for a week. I was mad. It wasn’t fair. The kids and the principal blamed it on me but I didn’t do anything. It was messed up.

Later that day at my mom’s work, we were leaving and my stepdad told me to get in the car. I started banging on the car window saying, “Let me out.” I wanted to run away from my problems. I was upset because there was too much on my mind—the teasing, people accusing me. I blamed my mom for putting me in that school. I yelled at her, “I hate you mom.” I got out of the car and ran into the street. One car stopped and its brakes screeched—it almost hit me. That scared me but I kept running. My mom was chasing me in the car. They had to call the cops and an ambulance to take me to the mental hospital again.

I stayed there for a month but I didn’t go back home. They were worried that if I went home I might run into the street again. So I went to a locked treatment center where I couldn’t leave the grounds by myself. The long hallways and rooms reminded me of the mental hospital, but there was a school and instead of nurses there were staff who were strict.

I was scared about being in a new place. I thought the other kids might bully me. I would pull the sleeves of my sweater down to hide my hand or put my hand in my pocket. A few weeks later I told the kids, “I’ve been teased a lot” and I showed them my hand. I felt scared, what would they think? They asked me what happened. I told them, “I was born this way.” They didn’t make fun of me. They said not to worry.

Even though the kids were nice, I really wanted to go home. I missed my mom. I could see her for only three hours a week. I couldn’t feel the love from a good-night kiss, her putting a blanket over me when I was asleep and her home-cooked food like tamales and enchiladas. Instead there were staff members saying, “She doesn’t act good,” watching me 24 hours a day! It felt like jail.

I was sad and acting up because I wanted to go home. I hit the staff. One day I drank shampoo. I started vomiting. They gave me a liquid to flush my stomach. I wasn’t thinking, I just did it. Looking back, it feels like a different person. At the time I was having problems.

Another time I ran out the front door. I got across the street and the staff caught me. I was crying. They asked me why I did that. I said, “Because I want to leave.”

I went to court so the judge could see how I was doing. I told the judge and my lawyer, “I miss my mom and I want to go home.” The judge said, “You’re not going to go home if you keep doing this.” They made a contract with me that if I did good, the group home would let me visit my family on the weekends. I decided to start doing good because I wanted to see my family.

It was hard but I tried to do good. The staff was there for me. I’d be crying or tell them I want to go off because I missed my family. They’d say, “Remember your contract.” When I was upset they’d ask, “What’s wrong? Can I talk to you?” That helped because I used to keep my feelings inside. If you keep it inside it builds up and you explode. They helped me express myself in words instead of going off and yelling, hitting people and running away.

The kids listened and didn’t judge me

Having support from the kids helped me too. We have group meetings where we talk about our problems. My therapist Leah told me it would help me if I talked about my feelings. I’d say, “I’m having a hard day.” The staff would say, “Does anybody support Tanya?” and the kids would raise their hands. They really cared about me.

A few weeks after I’d gone to court, my therapist recommended that I be allowed to go on visits with my family. She said I had improved. She could see that I was trying. The court said OK.

I couldn’t wait until Saturdays to see my family. My mom always cheered me up. We’d go to downtown L.A. and buy stuff for her work, like balloons. We’d go to Salvadorian restaurants and eat. We’d visit my aunts. Sometimes we’d stay at home. My mom showed me how to cook pupusas and tamales. I needed help from my mom to roll the dough because of my hand. I’m a mamma’s girl. I feel happy when I’m with my family. When I came back to the treatment center I wouldn’t miss my family as much because I got to spend time with them. It made being there easier.

When I was younger I just wanted people to be kind to me and I wanted friends. I wanted to be happy. I have that now. In group meetings, we stand up and hold each other’s hands. The kids hold my hand and squeeze it. It makes me feel like they’re not scared of me and they support me. They’ve been through a lot, like family problems and school problems. The kids understand me here because all of us have problems. When I’m having a bad day they say, “Keep your head up, don’t give up.”

My closest friends are Victoria and my roommate Gabby. When we go on outings, Victoria, Gabby, another girl Rosalie and me get in the back seat of the van and wave at the people in their cars. It’s fun. Gabby, who is three years older than me and has a son, lets me call her “mom.” She said, “You can be my daughter.” When I’m having a hard day she’s there for me. Like when everybody wanted me to charge their iPod (because I had a charger and they didn’t). They kept coming to the door of my room every morning and waking me up. They were using me but I was too shy to say anything. At a group meeting, Gabby said, “Can you please stop asking Tanya to charge your iPod?” I never had someone stand up for me. I felt like I had someone on my side. Before I used to think I wasn’t going to have any friends. Now I have friends.

After I had been here a year and a half, the staff said I was ready to leave. They said I’d matured a lot. They found me a group home with fewer restrictions. If I do good eventually I’ll get to go home. In group, the staff told everyone, “Tanya’s leaving for sure.” Rosalie said, “Don’t leave Tanya.” It made me feel so good.

Now I can be there for others

I think it was good that I came here. I feel like I’m a new person. I’m happy, caring, I make people laugh when they’re sad and listen to them when they’re having a bad day. One day Gabby was having problems and was crying. I came up to her and asked, “What’s wrong?” I held her and she cried on me. The next day she told me, “Thank you for comforting me.” I felt happy and proud that I could help other people.

I appreciate all the staff for being there for me. I want to say to the kids, thank you for accepting me. They showed me that everyone has problems and you can get through it. Now if people ask about my hand I say that God sent me like that. I don’t hide it. When someone teases me I ignore it or I stand up for myself. Before I couldn’t do that because I was scared of what they would say. I’m not embarrassed anymore. I accept myself now. I’m proud of what I’ve achieved.

My past was sad but I recovered. It doesn’t matter how you’re born or what people think of you, what matters is what’s inside.