If you had seen me a year ago it would be hard to believe I’ve changed this much in so little time. I wasn’t going to school and my grades were Fs and incompletes. My parents would give me talks in the morning and tell me, “It’s against the law not to go to school.” But I didn’t care.

I’ve always wanted to do well in school but I have a hard time getting up and going. It started in elementary school. I’d think, “I’m tired.” I wanted to stay in my bed under my warm blankets. To get me to school, my mom would throw me over her shoulder or take a half hour to get me dressed because I was fighting her.

When I was in fourth grade, my older brother and sister were seeing a psychiatrist, so I came along to the appointments and sat in the waiting room.They had inherited anxiety disorder and depression from my mom. My parents would explain what was going on with me to the psychiatrist: “It’s always a battle getting her up in the morning. She’s not doing her assignments and she’s missing school.” The psychiatrist said, “It sounds like anxiety and depression. We can put her on medications and see if it works.” I didn’t understand what they were talking about. I didn’t know what depression and anxiety were. They told me “it’ll help you” so I took my meds but I didn’t know why.

But the medications didn’t always seem to work. I still wasn’t doing my assignments because I was lazy. After I missed an assignment, I didn’t want to go to school the next day. I was picturing my classes each period, seeing my teachers disappointed. You didn’t complete your homework again? After I missed one day it was a struggle to get out of bed the next day because I still had not completed my homework.

In middle school I’d miss one or two days a week and was late almost every day I did go. In the morning my mom would nag me, “I’m going to get in the shower and I want you dressed by the time I get out.” I’d think, “I’m tired, let me go back to sleep. I don’t want to go to school. I don’t want to face my teachers. I should have done my homework.” But I’ve always had a hard time expressing my feelings so I wasn’t communicating what was going on inside me. When my mom came back and I wasn’t dressed she’d yell at me, “You need to get dressed and get going.” I wouldn’t say anything back so eventually she left me at home because she had to get to work. 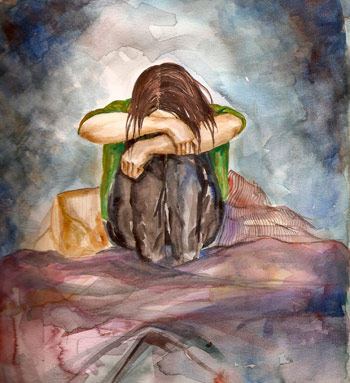 My parents would tell the school that I was depressed so my absences were excused. But after a while my parents stopped giving my school a reason because I was staying home so much, so I got detention for missing school. I failed English and got Cs and Ds in my other classes. Every year I went to summer school to get my credits. I knew that if I missed too much summer school I’d get dropped. I needed my credits, so I used that as motivation to go.

I told myself at the beginning of ninth grade that I would change. I was going to go to school every day, do my work and get good grades, like a normal student. But it was a lot harder than I thought.

My best friends were going to a different school than I was. On the third day it hit me that my friends weren’t there. I didn’t feel like I had much in common with the people I had lunch with. I started missing three, four days of school a week. I didn’t go at all in November and December. Because I had been diagnosed with depression, the school had a tutor come to my house to give me my work.

Being alone every day got boring so at the end of the semester, I wanted to go back to school for second semester. But I didn’t know the people I had lunch with that well and I still had to take my finals. It was overwhelming all over again. I knew I had to have good grades and attendance to get a permit to go to the other high school with my friends. I tried to go to school every day but I couldn’t.

It seemed like nothing I did was going to be good enough so I gave up and stopped going again and stopped taking my meds because it didn’t seem like they were working.

I stopped caring about everything. I distracted myself by reading and watching TV. I even stopped showering. I could smell myself and my hair was greasy. After a while I noticed dark patches on my skin. I rubbed it and the dead skin came off. I realized the dark patches were dirt. Eww. I washed my arms in the sink or in the pool. Looking back, it grosses me out that I didn’t shower but I can understand because I was depressed and I didn’t feel like doing anything.

One time that May I was sitting on the couch and I started thinking about how I wasn’t in school. I started crying. I thought about my friends, how they were probably having a good time. I thought about how my life was going down the tubes and I wasn’t doing anything about it. My life sucks. Why am I even alive? What if I died? Would the world be better without me? No, my friends and family would be sad, I thought. I didn’t want to think about that stuff so I started to read.

I had to leave home to get help

But one day in August, my parents sat me down and told me I was going to a group home. It’s a house where six girls live with staff members who are in charge and look after us. I didn’t believe it at first but it started to sink in. I was worried. Would the girls like me? Why are they there? Will I get along with them? I wanted to change on my own, I just didn’t know how. I realized the group home would help.

I left home about a week later. It felt like a fresh start. We went to Six Flags the second day I was there. We laughed and had fun. I was happy because I was getting out of the house and doing things. It was the first time I’d hung out with anyone in almost four months. I asked the girls, “Why are you here?” Some had been to mental hospitals for depression, anxiety or cutting, or been in fights. They had gone through stuff if they were here. I realized they wouldn’t judge me.

When school started two weeks later I got up and went. The movement in the house helped wake me up. My roommate Bryanna would wake up earlier than me and she’d turn on the light. I’d lie in bed until the staff knocked and opened the door and said it’s time to get up. I’d stay in bed for a few more minutes and then get up. The consequences were in the back of my mind. If you’re not ready on time, when you get home from school you have to stay in your room and can’t talk to the other girls for an hour or two.

After school we have down time, then we have a snack and an hour of homework group. I was motivated to do my homework because I had a set time. I was happy and doing well. I was taking my meds and they seemed to be working. They kept me from falling back into depression. There was more structure than I had at home and I liked that.

One day after I’d been there about a month, the girls were saying that they weren’t sure if I was showering. One of the staff, Lainee, told me that I’d have to stick out an arm and leg and show shampoo in my hair to make sure I was taking a shower. Later that day, I was crying on my bed. Lainee came in and asked, “Why are you crying?” I told her that I was taking showers. Why did they think I was lying? She said they just wanted to make sure. She hugged me at the end of the conversation. I hadn’t talked to someone about my feelings before. It felt good to get that out and have someone understand how I felt. I wasn’t as upset.

I learned to open up

After the staff talked to me a couple more times, I realized that they were there to help and that I could talk to them or the other girls about stuff. When I was having a bad day or I was upset about drama with the girls, they’d say, “Are you OK? Do you want to talk about it?” It helped to get it out. They offered advice and what I was worried about didn’t build up and put me under a dark cloud.

I started to talk more with my parents too. We talked in family therapy. I’d tell them how I was feeling. We could talk about stuff without yelling because we had the therapist to say, “Why don’t we hear your view on this?” We talk and we try to understand where the other person is coming from.

Because I was doing well, I got to go home to visit my family on the weekends. There was less stress so I was happier. One time my mom asked me to take a shower. I said calmly, “I’m going to shower. Can you please not nag me?” She said OK and walked away. I showered later that day.

After I’d been at the group home for six months, I felt like I was ready to leave. One day after I’d gotten up, I laid down on my bed. I thought, “I’m tired of being here. I don’t want to get up. I don’t want to do anything.” But then I thought, “If I’m reverting back to my old ways I’m not making any progress. When I’m back home I can think of what happened here and realize I can do it.” I got up and went to school.

One time I was feeling depressed because I hadn’t seen my friends in a while and hid from my mom that I was crying. But I told my parents later in family therapy. Eventually I’ll get to the point of telling my parents how I’m feeling and talk about it right away. I’m still working on it.

I’ve been here a year. I’m proud I’ve gone to school every day. That’s something I’ve never done my whole life. I’m happy because my grades are straight As. I’m taking showers every day, too. I love being clean.

The plan is to go home in the next few months. I want to go back to the real world but I’m scared that I’ll go back to the way I was. When I’m feeling depressed I’ll talk to someone. I have to keep working on it and I can’t give up or I’m going to be depressed again.

My struggle with depression. Joe, 18, became so depressed, he spent a few days in a psych ward to make sure he wouldn’t hurt himself. Reprinted from 1997