Last year around Christmas my family and I went to skid row, a section of downtown L.A. with a lot of homeless people, to hand out 50 care packages with blankets, toothbrushes, toothpaste and clothes to the homeless. My aunt wanted to start a tradition of giving, not just receiving, during Christmas time. As soon as we stepped out of our car, about 20 people came to ask for a package. We ran out before we could walk down the block. I didn’t see any teens. But according to the Los Angeles Homeless Services Authority, there are more than 3,000 homeless people under the age of 18 in L.A.

When Laura , one of the L.A. Youth editors, asked if I’d like to interview some teens who had been homeless, I thought it would be a chance to try to understand what it means to be homeless at my age. I thought that being a homeless teen meant that you were addicted to drugs, had abusive parents or were mentally ill. Even though some of those things were true for one of the teens I met, I was surprised to learn that their stories weren’t that simple.

We went to Covenant House, a 104-bed shelter in Hollywood that gives homeless youth ages 18 to 21 a place to stay, food to eat, help finding jobs and tutoring for the high school equivalency test. They also learn skills like how to budget and cook, so they can live successfully on their own when they leave the shelter. To live at Covenant House you have to be in school or working. They provide services like counseling and free medical care. 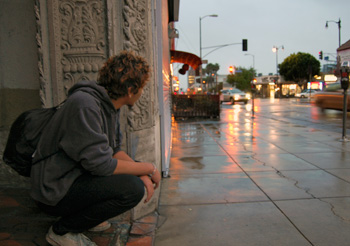 When I walked into Covenant House, I was nervous. Were they going to think that I was some privileged kid who didn’t care about them, but was just interested in looking like a good person because I was there to interview them? Neither of the teens I talked to seemed judgmental or skeptical of my interest in their stories. I was glad and it made the interviews much easier than I thought they would be.

I talked to Luis first. He is 18 and has lived at Covenant House for three months. He began by telling me that when he was 5 he was taken from his parents because they used drugs and physically abused him, and put into the foster care system. He lived in foster homes and by the time he was 8, he had started selling drugs. By the time he was 11 he was using them. At some point, he joined a gang. He was first arrested when he was 14. After that he’d been in and out of jail and on probation. I thought it was sad that Luis was introduced to drugs at such an early age.

When Luis got out of jail last summer, he was 18 and too old to be in foster care. He wasn’t in touch with his parents, so he didn’t have a place to live. He looked for warm places in Hollywood and the San Fernando Valley to sleep. He sometimes snuck into hotels and apartment buildings. Once, he was caught, but the owners of the building knew it was cold outside and let him stay the night. Luis didn’t want to go on that way. “I wanted to get sober and back on my feet,” he said.

He plans on taking classes and getting a job

Since Luis’ older brother had lived at Covenant House before moving in with his girlfriend, he recommended the shelter to him. Now Luis is taking advantage of the resources at Covenant House, looking for a job and planning to take classes at Pierce College. It’s been hard for him to find a job because of his criminal record, but he has an internship at Covenant House working with its outreach van that drives around Hollywood at night, giving out food and water to other homeless teens. When I asked him what he liked most about Covenant House, he told me, “They’re here to help. They’ll work with you, too, at your own pace.”

The thing I thought was most inspiring about Luis was the fact that he was extremely self-reliant. I asked him where he found the most support and he answered, “Myself.” He explained that if he gets himself into trouble, he knows how to work his way out of it and that relying on friends doesn’t work because they might drag you down even more. I was surprised that he was still in touch with his family. I always imagined that homeless people had no one. In addition to his brother, Luis visits family at his aunt’s house. He stayed with her for a week after he got out of jail, but since he didn’t grow up with them, he didn’t feel comfortable staying there because he felt that he didn’t know them well enough.

She moved to L.A. to be a star

I talked to Lace next. She is 19 and has dreams of becoming a famous singer. She moved to Los Angeles from Ohio four months ago without knowing anyone. I asked her about her childhood, but she didn’t want to go into a lot of detail about her past. I was too nervous to ask why. She told me she had lived in shelters with her mother and little sister, but eventually she and her sister ended up in foster care. Lace said that even though they’d been through a lot, her mother was a great parent. Because Lace moved around so much, she went to 18 different schools. But she got her high school diploma and even went to college for a semester.

On her first day in Los Angeles, she went into a McDonald’s and met a guy who let her stay in his apartment for a while. I couldn’t believe that she trusted someone so soon, especially when that stranger was a guy. Then Lace went to the Los Angeles Mission shelter in downtown. “It was a horrible, horrible place,” she said. She said there was a lot of crime and she wanted a better place to stay. She read about Covenant House online and called the night before Thanksgiving. Because the shelter was full, she was put on the waiting list. The nights that she had to spend on the streets, she refused to sleep. To stay awake, she walked around Hollywood. Finally, a few days after Thanksgiving, a bed opened up for Lace.

Like Luis, she was determined to handle things on her own, like finding a job. “When I came I said, ‘I can do it. Leave me alone. I can do it.’ And the next day I got a job.” Lace now works at nearby movie theater and is paying off her debt. She has credit card debt and a school loan to pay back.

She loves music and hopes to become a famous musician. One day she told the staff, “I need to play my music.” A few days later, Covenant House gave her a guitar that had been donated. Since then, Lace has been teaching herself how to play and write her own music. She said that when things get hard, music makes it all go away. She is hoping to take classes at a music school in Hollywood, and plans to use her passion for music to make a living and be able to buy a nice place of her own.

Lace’s extremely positive attitude was really impressive. “I don’t walk around and tell people I’m homeless.  I can’t dwell on that. People come up to me and tell me, ‘You don’t look like you live in a shelter.’” She was so sure and confident in herself that I was almost jealous. She had such a determined tone in her voice every time she talked about her future. She made it seem like it was only a matter of time before things would start to go better for her. I wasn’t sure how someone who’s faced so much still had the drive to keep going. I really want to apply the same willpower to my life.

I expected Luis and Lace to seem depressed about their situations, but they weren’t. Both of them seemed like they knew what they wanted from life and themselves. They were determined. They have hopes for the future like anyone else. They just have to work harder for them than most teens.

It’s harder to make it without support from your family

Luis and Lace got rid of my idea that homeless kids had the same stories. They had similarities, of course. Both of them were in foster care and had to deal with their problems without the help of families, but they were very independent in their own ways. I thought about how important it was to have some kind of positive support system, like family, to keep you safe. Lace actually chose to come to L.A. even though she knew she wouldn’t have a home and Luis chose to trust only himself to get through his situation.

I really hope that life works out for Lace and Luis. I hope Luis will get through school and get that job with computers he wanted. I hope Lace is able to make it in music and doesn’t have to worry about being homeless again. They seemed like really cool people. I think that if they keep going the way they are, they’ll be fine.

A world apart. A teen spent four years on skid row, just blocks away from and in the shadows of high-rise buildings and prosperity. (January – February 2006)

My life on the streets. William, 18, lived on the streets for nearly two years. What he saw and experienced, no teenager should have to go through. (May – June 2005)

Homeless for the holidays. M. Gar Caswell, who was homeless for four years, recalls her first Christmas on the streets. (January – February 2001)