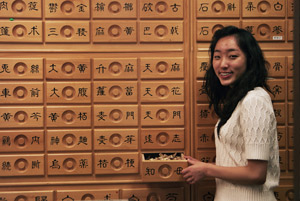 Lolly in front of a cabinet in her aunt's clinic where about 150 ingredients for tonics are stored.


Step into my family’s dining room. There is a small table in the middle of the room, a few shelves lining the walls, and our kitchen to the right. In the corner to my left there are about 50 unassuming plastic jars each about a foot tall, filled with ginseng, dried jujubes and other herbs. From the corner of my eye, I spot a half-full jar of something brown that looks like tree bark. It’s labeled “steamed rehmannia root,” whatever that is.

This is my dad’s space. My dad, like my aunt, uncle and great uncle, is an acupuncturist. The best way I can describe it is he puts needles into points called meridians on the body, which correspond to other parts of the body—for headaches, needles often go into the legs and hands, not the head. Acupuncture can treat a lot of different things, ranging from pain relief to losing weight. When I tell my friends what my dad does, some of them reply, “That’s pretty cool,” but other times I get, “That’s weird.” For most of my life, I felt the same way—I never really appreciated acupuncture even though it was a part of my life growing up. In fact, I tried to avoid it, because whenever I got sick, my dad would come after me with some treatment I found ludicrous.

When I was about 10, I wolfed down a meal too quickly and felt nauseous afterwards. When I told my parents about it, my dad said to me, “Give me your hand.” He then took a small piece of string and coiled it around my thumb. I was nervous as the tip of my thumb slowly changed color from beige to pale purple. “Um … Dad,” I said, “What are you doing?” He replied, “I’m going to prick your thumb just slightly with a needle. To ease the circulation of blood.” Now this was going too far. I thought, “You’re going to stab me? No way!” and tried to pull my hand away from his grip. “Now just hold on a second,” he said to me. “This won’t hurt much.” Fighting back tears as best as I could, I toughed it out as the small sterilized needle pierced my skin and a bit of dark blood pooled around my finger. It didn’t hurt and surprisingly, I felt a little better. Soon afterwards, my nausea subsided. Honestly I couldn’t tell if my dad’s trick with the needle was what really helped, or if my body had returned to normal on its own.

Ewwww—you want me to drink that? 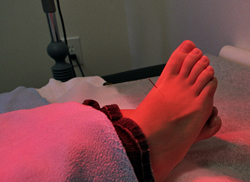 A needle placed in the foot treats stress.


This type of needle treatment was what I hated most about acupuncture. I mean, who would want needles forced into their body? The second thing I didn’t like were herbal tonics. They just look straight up funky. Traditional Korean herbal “medicine” is more like a tea or tonic. Depending on your ailment, an acupuncturist will choose various ingredients (there are more than 300) and brew them with water. Unfortunately, these tonics look better than they taste; I think the taste is best described as something between tree bark and soil. Yum. As a kid, my parents would make me drink these brews to boost my immunity and improve my overall health. Every time my dad came up with a new concoction, my parents encouraged my sister and me to try them. “How does it taste? Does your stomach feel any calmer? Would you like more?”

“This tastes like crap. No I don’t feel any different. And no, I would not like to drink any more tonics” were what we thought. But because we didn’t want our parents to feel bad, my sister and I would drink them reluctantly. I’d usually make a sour face and down the drink bottoms up because candy or gum awaited me afterwards. But what I wished most of all was to just get a tub of vitamins (like the chewable Flintstones ones) like all my friends.

Growing up in a household that practices acupuncture, I learned lot about it even though I didn’t appreciate it. As a kid, I never talked about it with my friends because I was embarrassed by all the herbal, “all natural,” Eastern medicine things my family was into. It just seemed like not a lot of other people lived that way.

When I was in middle school, my friend Eileen came over to my house. When she walked in, she was fascinated. I showed her around my house and we came across my dad’s study. Inside was a treasure trove of strange learning materials. Exhibit 1: three posters on the wall. Each poster had a diagram of a body with dots, dashes and Chinese characters all over it. The dots were acupuncture points called meridians, which show where the needles should be inserted. There are hundreds of meridians on the body (even on your nose!) so the poster looked pretty funny— naked bodies with constellations all over them. 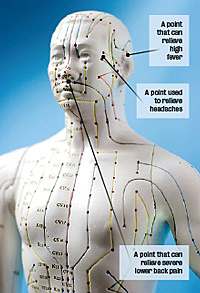 WHAT IS IT?
Acupuncture is a form of ancient Chinese medicine. Thin needles are inserted into specific points on the body to improve circulation and overall health. It can be used to treat problems such as asthma, ulcers, pain and allergies.

HOW DOES IT WORK?
Meridian points (represented by the dots on the sculpture above) correspond with parts of the body. Inserting a needle into meridian points relieves pain, treats other symptoms, and improves blood circulation.

WHAT IS HERBAL MEDICINE?
Herbal medicine can be used with acupuncture or on its own. Mixtures of roots, herbs, barks and dried fruits are cooked into tea-like drinks called tonics. The tonics are used for healing and are commonly used to treat stomachaches and headaches.

Eileen and I stared at the wall in silence for a few seconds, then exploded in gut-busting laughter. We were immature middle school girls, and naked people hanging on the wall were funny. Exhibit 2: a small rubber doll about a foot tall that was standing on my dad’s desk. This doll was basically a 3-D version of the posters on the wall; there were meridian points labeled everywhere and Chinese words that followed. “It’s like an acupuncture Barbie,” Eileen said. “Except it’s naked …” Other things I showed Eileen were the herbal ingredients in their plastic containers and deer antlers sliced like pepperoni, which were in my freezer. “You eat those?” she asked. “They’re another ingredient sometimes used in tonics,” I explained, slightly embarrassed. Eileen said my home was funny and different, but really cool. After hearing that from her, I felt more comfortable with acupuncture and its role in my life. Everyone’s family has different beliefs and traditions, I realized; acupuncture is ours.

Last year, I had a dizzying headache and the sniffles. I told my aunt about it. She took my pulse and agreed that I was coming down with a cold. She took a few needles out of a kit and stuck two in my right hand and two in my lower left leg. I was afraid it might hurt in my hand because there isn’t much flesh in that area, but surprisingly it didn’t feel too bad. Because the needles are hair thin, I could barely feel anything at first. My aunt gently twisted them a tiny bit further into my flesh; this freaked me out. I could feel a small but sharp pain for two seconds. As soon as she let go, the pain disappeared. So I sat perfectly still with these funny looking pins in my hand and leg and watched TV for about 20 minutes. My aunt then gingerly pulled the needles out. At first, I didn’t notice much of a difference. A few minutes later my aunt asked, “Do you feel any better?” I realized that my headache was gone. I had forgotten about the pain as it slowly subsided. That’s when I realized how beneficial acupuncture could be.

For the first time I became excited to learn more about acupuncture. Acupuncture is a form of medicine that helps the body maintain balance. There are 16 different body types. There are those who have too much heat in their upper body and not enough in the lower body or vice versa. Most times, the human body is not completely “balanced,” which can lead to headaches, skin problems or indigestion.

This type of medicine was so important to my family, but I had never cared enough to ask any questions about it. All I ever did was try to avoid it. When I began to talk to my family about acupuncture, I realized how embedded it was in their lives. My aunt met her husband while studying acupuncture and now they practice jointly in a small clinic in Koreatown. My great uncle immigrated to the U.S. from Korea with nothing in his pockets, but had an ambition to practice acupuncture. He started out treating a few patients free of charge. Today he is a respected acupuncturist in L.A.  Knowing all these things finally helped me understand my family and their firm belief in and respect for the ancient medical practice.

I’m proud that acupuncture is part of my culture


Even though I no longer think acupuncture is that weird, I bet others may think that my family is a bunch of kooky hippies who believe herbs and flowers will cure the world; but they’re totally not. If I woke up in the middle of the night spewing blood, they’d take me to an emergency room ASAP! Most acupuncturists agree that there are some conditions that Western medicine is better at treating. Because the main principle of acupuncture lies within balance, and maintaining the balance of yin and yang in the body, I think that idea extends to my parents’ lives. They stress a balance between Eastern and Western medicine (we do have Advil and other pills at home) and acknowledge the importance of both. And being Korean immigrants, they believe in the cultural balance of the Eastern and Western worlds as well. I think it’s cool that my parents’ belief in balance extends beyond the realm of medicine; they apply it to almost every aspect of their lives.

When I was younger I didn’t give much credit to Eastern medicine because I’d grown up in L.A. and observed most things with a Western perspective. If something was wrong with my body, I’d try to zap it away with a pill or cough syrup. I wasn’t in tune with my body and only focused on the immediate pain. Even though I still think the tonics taste like crap and the needles are kind of freaky, I’ve grown to appreciate them. I’ve learned about the importance of balance, and not struggling against the natural flow of things. I’ve accepted Eastern medicine into my life instead of fighting to push it away. Because acupuncture is something really important to my family and my culture, I proudly embrace it.

Acupuncture has been around for more than 2,000 years; to see my family practice such a traditional form of medicine makes me feel like a part of something ancient and more connected to my ancestors. Today as I walk past my dining room, I see bins of dried leaves, old tree bark, and perhaps my dad filtering through them thoughtfully. Instead of wrinkling my nose in irritation, I smile as the woodsy aroma of a deep forest fills the air.