Should I give the dog back? 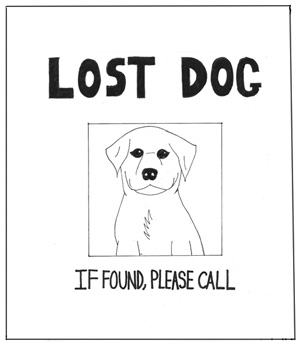 It was a few years ago on a rainy day when we found her. My family and I were walking to my aunt’s for a birthday party. We passed by a dumpster and behind it was a shivering dog.

“Don’t get near it,” my mother warned. It was a small white dog; at least it used to be white, now its fur was dirty and covered in oil from sleeping under cars. It also had a tattered pink leash. I began to get near it but it started backing up. It winced and limped away from us.

We went to the party. Despite the rain, everyone was having fun dancing and laughing. As we began to leave, the dog limped toward us. My dad put her near the fire to warm up and fed her some meat. We all decided she should come home with us since it was obvious she was lost. It would have stayed with my aunt except my cousin was allergic.

After she was clean, her fur was white and curly but neatly trimmed. We played with her and had a lot of fun. One day as I was walking home I noticed a flier. It had a picture of the dog we found saying it was missing. I continued to walk home and contemplated whether or not the dog was her and if so, should I return her? I didn’t want to return her. I enjoyed having fun with her.

“Should I give her back?” I thought to myself. I pondered my dilemma and reasons why I should. For example, it wasn’t my dog to begin with. Her owner was probably worried about her and it was the right thing to do. “Or was it?” I thought. In that moment I didn’t know what was right and what was wrong.

I then began to convince myself that that had not been the right dog. But it was pointless; deep inside I knew it was. A few days later it was pouring rain and there was a knock on the door. Outside was a woman in a thick coat. “Sorry to bother you” she said, “but have you seen this dog?” She held up the flier that I had seen the other day. “She responds to Coco.”

I had to make a choice: lie or tell the truth. Then I imagined the woman out in the pouring rain, going from door to door looking for her dog. She never lost hope even though it had been weeks. I knew what I had to do. She loved her dog and I shouldn’t take that away from her. I gave back the dog, who was very happy to see her. As I watched them walking away, I knew I had made the right choice. Instead of being selfish I had told the truth and I felt much better than I would have if I had lied.

It was Saturday night and I was getting ready for one of the biggest parties of the year. One of my friends is friends with the party host, a football player from my school. I was extremely nervous because I wasn’t the most known or popular person in my school. I heard my friend honking outside, which added to my nerves. Coming out of my house my mom gave me a big kiss on the cheek and told me not to do anything stupid. I promised her I wouldn’t, but that promise would soon be broken.

Driving up to the house I could see people outside dancing in the street and acting stupid. I felt awkward being there because I knew the people there but I had never talked to them. My friend and I went to the backyard where there was a fire with people around it drinking from red cups. Me and my friend sat down in the circle and were offered alcohol. In my head I was saying, “NO, NO, NO!! REMEMBER WHAT MOM TOLD YOU …” The guy had the beer right in front of my face. I said, “No thank you, I don’t really like drinking alcohol.”

Everyone in the circle was telling me not to be such a wimp, that I was scared, and teasing me. I got embarrassed so I decided to grab the beer but not drink from it. They yelled at me to chug the beer down. I really didn’t want to. They laughed at me so I chugged the bottle and I didn’t really feel anything. They started chanting my name and I felt like I was a part of something and I was popular for the first time. They gave me another one and I took sips here and there, but I didn’t think it was going to do anything.

By this time I couldn’t remember anything so I had to rely on my friends to tell me what happened. They told me I kept drinking and drinking. I was acting stupid and not acting like myself. They had to drag me out of the party because I kept falling over. When they dropped me off at my house they had to knock on the front door. My mom opened it and was worried sick.

The next morning I woke up with my head hurting and my stomach angry. My face was glued to the toilet. I kept throwing up. I felt really bad. I had broken a promise to my mom and to myself. I felt stupid and embarrassed that I let peer pressure get to me. I promised myself I would never drink again and I would make sure to keep this promise. Today is my 49th day since I had a drink of alcohol.

l
I lost my mom’s ring

My parents have always stressed the importance of honor and integrity. My mom often says to me, “The moment you lie is the moment when I will lose all my trust in you.” So with that threat in mind, I remained a very truthful person. But as I grew older and entered high school, I felt a strong sense of independence. Because of that, I started lying to do the things I wanted to do.

One day, my mom and I were cleaning out her jewelry box. That was when I encountered her diamond engagement ring again. It was a simple diamond with small rectangular diamonds around the band. My mom told me to try it on to see if it would fit and miraculously, it did! She told me that I could keep it. I was in shock. This was the first jewelry that my father had given her and she gives me the responsibility to wear it and watch over it? But I was too awestruck by how it beautifully complemented my pale complexion that I didn’t even hesitate to say “OK!” From that day on, I wore that diamond ring every day.

It was during my junior year’s spring final when things took a turn for the worse. My mom wanted me to concentrate on my finals before I did anything with my friends. I thought that was completely unreasonable. I thought it was enough that I had to sit through two hours of a class just to take my finals. I felt that I deserved a day to relax. So that was why, during the middle of finals week, my friend and I decided to go to the beach. It was a mastermind of a plan. I would tell my mom that I had to do a science project, saying that my science grade depended on it. Of course, she didn’t say no to that. So after school ended, my friend and I drove all the way to Huntington Beach, enjoying the water and waves and having a great time. We were having so much fun that I didn’t even realize my ring was missing from my finger. After I realized it, I went into complete shock. “Oh my god,” I thought. “This can’t be happening. What do I tell Mom now? I can’t tell her the truth. She is going to kill me!”

When I got home, my conscience was fighting me, telling me to tell the truth. But I was so scared. How could my mom forgive me? Plus, she couldn’t know that I went to the beach and lied to her. Things were spiraling out of control and I felt so overwhelmed. So, I decided to not tell her. The following day, my last day of finals, which happened to be my most difficult class, I couldn’t concentrate at all. The only thing that was running through my mind was how I was going to tell my mom. I couldn’t focus on kinetic energy, torque, force or anything physics-related. It was a disaster.

So after finals ended and I got home, I marched up to her room, opening the door slowly. She was relaxing on her bed after a long day of work. I told her, “Mom, I need to tell you something.” And everything spilled out. My mom listened intently. I felt fury and rage boiling inside of her, but she had on a mask. I couldn’t tell if she was mad or if she was disappointed. She just stared blankly at me as I was telling her everything. After I was done confessing, the room was deadly silent. In the most menacing tone, she told me, “Get out.” I got out of her room and started to cry. This was all my fault. If only I hadn’t gone to the beach, if only I hadn’t lied to her, none of this would have happened. I lost my mom’s ring, a symbol of my mother’s and father’s relationship. How is my father going to look at me now?

From that day forward, I’ve tried my best to be as truthful to my parents as possible. I don’t want to hear the hurt and disappointment in her voice ever again. I can’t damage the relationship I have with her just for a little lie. No lie is worth it.

NEW ESSAY CONTEST — Who or what are you jealous of?

We’ve all been jealous at one time or another, whether we were envious of someone’s looks or possessions or abilities. When we’re kids we get jealous of the toys other kids have. When we get older, it could be someone’s beautiful long hair or the freedom they have that we don’t. We want you to tell us about an experience when you were jealous. Why were you jealous and how did you feel about it?

Write an essay to L.A. Youth and tell us about it:

Mail your essay to: