Suppose you walk into a record store and decide to steal all the albums that you’ve downloaded from the Internet. How many dollars worth of CDs have you taken? For many of you, I bet it’s more CDs than can fit in your backpack. Now, you’re obviously not actually going to run out of the store with them.

There are a lot of people, especially teens, who think there is nothing wrong with downloading music from the Internet. Take for example 16-year-old Billy from Long Beach (his full name is being withheld to protect his identity) who loves that there’s music on the Internet.

"I don’t have enough money to pay and can’t drive to a record store," he said.

Well, I rarely get any money and I don’t have a car, but I have managed to buy more than 90 albums, so many that they don’t fit in my CD drawer. Some are in stacks on top of my desk and scattered around my closet. Not only that, but I have cassettes (like Shakira’s ¿Dónde Están Los Ladrones?) also scattered around. I bought all of these from stores with money that I saved.

I won’t burn for you

When my friends found out that I had a burner they asked me to burn them CDs, some of which were my CDs that I had paid for. I said "No." First, I didn’t have the time, and second, but more importantly, I felt cheated. I paid money for an album that they wanted for free. I felt like they were trying to take advantage of me, so imagine how the artists feel. It got worse when my friends found out I had a high-speed Internet connection.

They quickly asked me to download them songs off the Internet and onto CDs. I again responded with "no" and used the excuse that I didn’t have any blank CDs, or that they were my brother’s. So people started to offer me money to burn them. They wouldn’t give up. Day after day I was asked the same question and I had the same answer. I said "no" and changed the subject.

My friends eventually gave up and started going to a guy at school who ran a business selling burned CDs. He passed out fliers listing the various artists he could burn songs from and took requests, of course for an extra charge. He charged $5 for about 12 songs. He used to walk around school and brag about the money he made. However, other people started to offer to burn CDs for less money and eventually everyone knew who to ask to get them for free.

Money seems to be the most common reason why teens feel entitled to download songs. Teens don’t have much spending cash, and yes, sometimes CDs are overpriced.

Even the record companies have admitted that they’ve been overcharging. This past spring they paid out more than $67 million in refunds for CDs bought between 1995 and 2000. The world’s largest record label, Universal Music Group, took a huge step in September to attract buyers; they cut CD prices 25 percent.

Teens know it’s illegal to download music but many don’t care because, as Joseph, a junior from Hawthorne, said, downloading songs is his main source for music. He has downloaded about 1,300 songs (and that count is after deleting a lot of them) from artists such as Metallica, New Found Glory, blink 182, Less Than Jake and the list goes on. He has bought only 10 CDs because he downloads whenever he hears a good song on the radio. According to the Recording Industry Association of America (RIAA), which is the group that represents the record labels, people like Joseph have illegally downloaded as many as 2.6 billion files in a month.

The RIAA reports that sales have dropped from $14.6 billion in 1999 to $12.6 billion in 2002. The association claims that downloading and burning have been the biggest reasons for the drop in sales.

Well, maybe we should start to care. Napster, which relaunched a for-charge version 2.0 on Oct. 29, was forced to shut down its first system of music transfers in 2000, because it had thousands of copyrighted songs available for users to download without charge. Earlier this year, four college students were taken to court because they were running services similar to Napster. They are now forced to pay between $12,000 to $17,000 each over the next three years. On Sept. 8, the RIAA sued 261 alleged filesharers accusing them of stealing music.

The RIAA’s strategy seems to be working, too. Kazaa saw its usage drop from more than 17 million visitors in March to around 10 million in August, according to news reports.

Teens use the justification that downloading introduces people to new artists. While this may be true, there are other methods. For-charge Web sites allow users to listen to songs and download them from known artists like Jane’s Addiction, as well as not-so-known artists, like Orkest and The Start. Many artists also have music pages on their official Web sites, from which Internet users can download one or two songs or clips of songs that appear or will appear on their albums. That way if people like it, they’ll buy the album. There is really no need for Kazaa, a file transfer system similar to Napster that allows illegal song transfers, to help spread the word. The artists are already doing that for themselves. 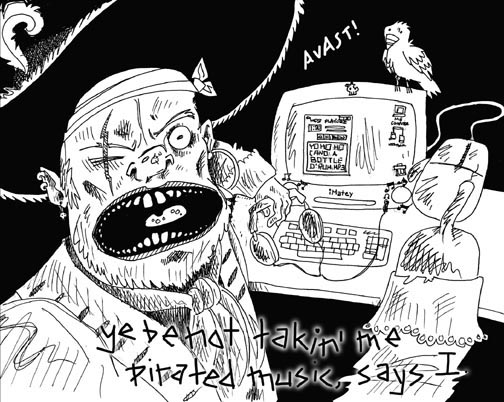