So here I am, officially about to be late to chemistry class in the next three minutes. I’m power-walking to school, upper lip sweating, arms pumping and trying not to look like a complete idiot. All kinds of thoughts are rushing through my head and I ask myself, “What will my excuse be this time?” All of a sudden I’m startled by a loud honk and a guy wearing a baseball cap yelling, “NICE RAAAACK!” from his truck. I look away, annoyed, pretending I heard nothing as he speeds off.

I have had countless encounters with fools like this. I’m sure I’m not the only one. Not all cat calls are as obvious. Once, I was loading my bike into my mom’s car and a guy standing across the street saw that I was having trouble. He said, “A beautiful lady like yourself should have a man help you out. Luckily I’m here to rescue you.” Had he just offered to help me with the bike, it would not have bothered me, but him saying that he was here for my rescue made me feel like he was hitting on me. Regardless of who it comes from, cat calling is annoying, demeaning, rude, offensive and unwelcome. I want guys to understand that it makes me uncomfortable and I don’t like it.

It is the worst when I feel as if I have been singled out. Once I was at the grocery store reaching for my favorite cereal, Crunchy Corn Bran, and a guy who looked like he just walked out of Abercrombie said, “Look at that butt!” I felt degraded. When somebody says something like that they are also saying that that’s all I’m worth. It is not even close to being a compliment. 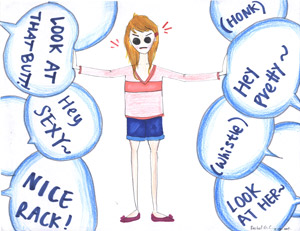 
When I get ready to go out, I carefully consider what I am going to wear. I think about how even the smallest thing, such as whether I should wear my hair up or down to cover my shoulders, might draw attention. I wonder if I should wear a sleeveless top or long sleeves because some saggy old guy who hasn’t shaved in days may make an annoying comment like, “Ohh, I wanna feel that skin,” at every corner I turn. It is frustrating to have to think about all these little things all the time.

The cat calls I get most often, such as a honk or a whistle, are the most offensive and rude. When I am walking down the street with my mom and a random person honks at me, I’m insulted. First of all, I’m with my mom. More importantly, it is belittling because if he honked at me, that tells me a lot about what he must think of me. Does he think that I am just anybody he can pick up on the street?

It’s my right to tell them it’s wrong

Usually I ignore the person making cat calls but sometimes I flip them off or say “f— you.” Although I hate to be rude, I get satisfaction from speaking up because I’m letting them know what it feels like to be treated wrongly. Sometimes I silence myself because I am intimidated and don’t want to make the situation worse. I grew up in a culture where women aren’t supposed to talk back to men and women are expected to just suck things up. My mom says not to respond to cat calls, but I don’t think that is fair. I don’t think it is OK for guys to do things and for women to just take it. Why should I take on the role of the silenced woman?

There are times when, even if a guy has approached me in a rude or annoying cat-call kind of way, I am still flattered. One Sunday morning I was getting out of my car, ready to go into church for the 10 o’clock worship service, when I saw this good-looking guy and his friends walking by. I bent over to reach into the car for my purse when I heard him whistle. I kinda smiled but at the same time I wondered why he did that. I hate to admit it but even if it is annoying, sometimes it’s nice when somebody gives me attention.

Regardless of who the comment came from and how I reacted to it, it’s still in the back of my mind that the only reason that I was approached was because of how I looked. I think that a good way to approach a girl is to be casual and ask her name. Ask her how she is doing and about her interests and take it from there. It would be nice if somebody commented on my personality or sense of humor. How I look doesn’t define who I am.

I don’t know why guys make cat calls, maybe it is just instinct. While all guys may not have bad intentions, I’m convinced some have it all backwards. I want them to be aware of how cat calls make girls feel and that I am not interested and don’t appreciate it. Girls, you should know that it doesn’t only happen to you, it happens to a lot of us and if you have an urge to say how unwelcome it is, you should.