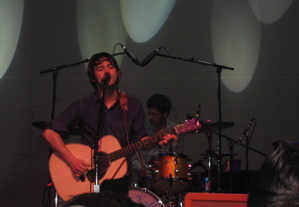 
There he was standing on the stage in front of me at the Henry Fonda Theater. He had shorter hair, new sideburns and Mystic Valley Band jacket with the initials “CO” sewed on. Although I’d seen him perform four times before as Bright Eyes, this was Conor Oberst with his Mystic Valley Band. Sure it’s the same person, but the music from the MVB is more country-inspired less folk. Maybe that’s why I wasn’t my over-the-top excited self to see him this time. But as he took the stage the name didn’t matter and he was that same artist who has left me speechless before.

The Mystic Valley Band played the first chord of “Moab” and everyone in the crowd gave a loud “wooo.” Oberst then stepped up to the microphone and sang “There’s nothing that the road cannot heal.” The lyrics began flowing out of everyone in the crowd. An amazing start, and the rest of the show followed just as strong.

The songs that stood out the most were “NYC-Gone, Gone,” which made most people dance what looked like a jig, and “Milk Thistle,” a song that Oberst said was written for someone who had saved his life many times. All eyes were focused on the center of the dimly lit stage where Oberst stood singing “And I’m not pretending/ That it’s all okay/ Just let me have my coffee/ Before you take away the day.” I was apprehensive about how these songs would sound live, since I’m not a big fan of their country roots and I wasn’t sure I’d be amazed like I was at a Bright Eyes show, but this song completely proved to me that anything with Oberst is beautiful.

After returning for an encore Oberst said a few words about never knowing what to say, then moved to the right of the stage, facing away from the audience behind a keyboard and started to play a song I’d never heard. It was called “Breezy.” Hearing this song gave me chills and I was sucked into the song, even closing my eyes to just hear the music. The melody was low and Oberst’s fragile voice overpowered the room as he sang “Move your slender fingers/ Help me play this song/ Spend another night inside this practice mansion/ I love you now/ I know that doesn’t matter.” The song ended much too soon and by the time I opened my eyes he was at the front of the stage blowing kisses and walking away. His voice was as perfect as if listening to the CD, and his songs, amazing. It wasn’t Bright Eyes. It was Conor Oberst, and I couldn’t have been any more pleased.