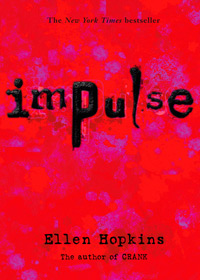 Impulse by Ellen Hopkins is my favorite book. It is narrated by three high school students: Tony, Conner and Vanessa, who have attempted suicide and are sent to a mental hospital, Aspen Springs, to get help with their problems. Although they initially feel vulnerable and unwanted, they quickly become good friends and bond over their struggles.

Throughout the book, which is written in free verse poetry, the characters reveal their pasts to each other. Tony was abandoned by his father and abused by his mother’s boyfriends and later overdosed on pills. Conner shot himself because he felt like he could never live up to his parents’ expectations. Vanessa, who has a father in the military and inherited bipolar disorder from her mother, stabbed her arm trying to kill herself.

In the beginning of Impulse, the three characters have a hard time adjusting to this strange new place. I cringed as I read that Vanessa cut herself because the physical pain provides emotional relief from memories of her mother acting violently. Tony is overwhelmed when his estranged father shows up and Conner is reluctant to see his superficial, cold parents.

As the story progresses, Vanessa and Tony grow particularly close. The three teens feel more secure opening up about their pasts not only among themselves, but also to their counselors. I was cheering them on because they had come such a long way since their first day. But to leave Aspen Springs, they must conquer a test that determines if they are ready to live on their own.

The Challenge by Choice is when all of the hospital residents are taught teamwork and responsibility by spending a week in the wilderness, guided by two staff members. Tony, Vanessa and Conner eventually make it to the challenge, but not all of them have the strength and willpower to survive it.

While reading Impulse, I was crying one minute and the next minute I was laughing at Conner’s wry humor, like when he calls the spaghetti at Aspen Springs a “Chef Boyar-Don’t meal.” I love this book because it is a voice for teens who struggle with their inner demons. I got a close-up look at the harsh realities of depression and bipolar disorder. I’m glad that it covered heavy topics that aren’t found in many books written for teens. Impulse taught me not to judge people based on how they look, because I never know what really lies beneath the surface. 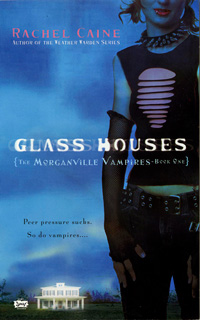 Glass Houses is the fantastic first book in the Morganville Vampires series written by Rachel Caine. I liked it way better than Twilight, which I thought was too slow-moving. I like books with more action instead of a boring love triangle.

The story starts with 16-year-old Claire Danvers beginning her freshman year at a college in Morganville, Texas. She’s in college already because she graduated from high school early. After Claire accidentally embarrasses another student, Monica, the mayor’s popular daughter, Monica threatens Claire that “tonight you’ll get what’s coming to you, you freak. I’m going to make sure.” After that Claire was so scared that Monica would hurt her that she moved out of the dorms.

Claire moves into an off-campus house with three older teens Eve, Michael and Shane. Even though her housemates are good people, they are a little odd. Eve is a Goth girl, who claims that Morganville is run by vampires. She also tells Claire that non-vampires either work for the vampires in exchange for not getting their blood sucked or they’re fair game to get attacked. Claire thinks that she’s joking.

Michael is 18 and the owner of the house. He never comes out during the day, ever. Right away I thought that meant he was a vampire. But Eve swears Michael is not a vampire. Finally, there is Shane. He doesn’t do much, except play zombie video games, and Claire thinks he is really cool. Her new roommates are the first people in town who are nice to her and are the best thing for Claire about living in Morganville.

Eventually, Claire learns that Eve isn’t crazy when a vampire shows her his fangs. She realizes that everything Eve told her about vampires controlling the town was true.  After learning the truth, Claire has to figure out how to be a student while not getting attacked by vampires because she doesn’t want to work for them. What makes that hard is that there are vampires and the humans who work for them everywhere so knowing who you can trust is a problem. Luckily Claire’s roommates have her back, but when someone Claire trusts betrays her I wondered whether she and her roommates would survive.

I recommend this book for people who like supernatural stuff mixed with action. I also liked the book because the characters are teens so you can picture yourself in the story. Glass Houses ends with a major cliffhanger, which drove me crazy. I couldn’t wait to read the next book in the series, The Dead Girls’ Dance.