A boy seeks redemption in this adventurous novel

The Kite Runner
By Khaled Hosseini

I started reading The Kite Runner by Khaled Hosseini for school. Being forced to read it made me not want to do it, but it instantly drew me in. It begins in Kabul, Afghanistan, which is so different from America that I wanted to learn more about the city and characters. But the book is less about the locale and more about how one person can haunt your memory. The book was so amazing that I read it in two days.

The Kite Runner is about an Afghan boy named Amir and his friendship with another boy, his servant, Hassan. As a child in Kabul, Amir lives with his father and Hassan. Amir plays tricks on Hassan, like changing the stories he reads to Hassan, who is illiterate. I felt bad for Hassan because he was loyal to Amir.

Together, Amir and Hassan win the annual kite-flying contest. People chase after the last kite to fall because it’s good luck to possess it. This is where the title comes from: Hassan was Amir’s kite runner, the person who chases the fallen kites. Hassan chases the last kite, but he’s gone a long time.

I could tell something bad was going to happen because Hosseini created a setting that made me shiver with fear and tense up with anticipation. Amir frantically searches for Hassan, and sees him in an alley surrounded by a gang. No one sees Amir, so he hides as he watches Hassan get raped. The narrator says, “I had one last chance to make a decision, one final opportunity to decide who I was going to be. I could step into the alley, stand up for Hassan … or I could run.” In the end, Amir runs away.

I wanted him to step in, but I realized that his running away made the story interesting because otherwise it would have ended there. It was interesting to see how he searches for redemption, even if it takes a long time.

After the rape, Amir ignores Hassan because his guilt is so strong. A few months later, Hassan and his father leave. Soon, when Amir is 13, he and his father flee to America when the Russians invade Kabul.

For 30 years, while living and working in America, Amir doesn’t think about Hassan. But after his father’s death, Amir returns to Kabul. Hosseini makes you want to keep reading because the plot is exciting. The fact that Amir was going home made me realize something major was about to happen and I read quickly to find out what. Was Amir going to find Hassan and make things better?
I liked the ending because it was realistic and not sappy, like so many books.

I recommend reading The Kite Runner because Hosseini keeps your interest by making it feel like an adventure novel. The book was full of vivid details and plot twists that will keep you turning the pages. 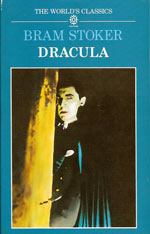 Classic horror is still worth a read Dracula
By Bram Stoker

Dracula is about the quest to hunt down the vampire Count Dracula, and stop him from creating armies of vampires. I know there are no such things as vampires, but there was a point in the story when Bram Stoker’s writing actually convinced me that vampires did exist a long, long time ago.

The story takes place in 19th century Europe. Count Dracula is centuries old and sleeps in a coffin in his castle. His body rises when the moon comes out, which is also when he feeds and is most powerful. He wants to introduce more vampires into the world because it will make him stronger as the leader of a new species.

Count Dracula has the power to put women into a dream-like trance. When he is invited into their rooms, he bites them, drinking their blood and leaving them with two mysterious red marks that lead to their death. Then they turn into vampires, just like him.

One of Dracula’s victims is a woman named Lucy, who gets very sick after he drinks her blood. Lucy’s friends try to cure her, but she dies and becomes a vampire. Her friends learn that, to keep Lucy from creating other vampires, they have to cut off her head and drive a stake through her heart to make sure she is dead. This scene was exciting because it was the first time a vampire is killed. After that, the hunt for Count Dracula begins. It is suspenseful because Dracula is immortal while Lucy’s friends are not. Killing Dracula isn’t easy because they have to find him and drive a stake through his heart.

I’m not a fan of horror and was surprised I liked this story. It is told through journal entries that are from the point of views of the main characters. I could see the emotions that each character had and I felt like they were telling me what they were thinking.
The book was originally published in 1897 and Stoker used words like “nay” and “whilst,” and phrases like “If it will please you.” Despite the old-fashioned writing, the story is a great read and enjoyable from beginning to end. It is full of suspense that kept me reading to find out what would happen next and how it would end.