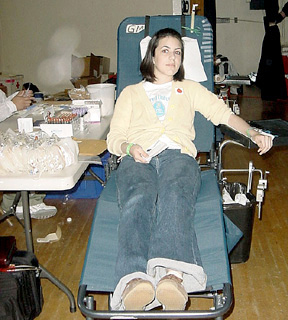 Stephanie lying on a table at a Red Cross blood drive at her school. After she gave blood the first time, she wanted to give again but couldn't on this day because she was feeling sick.
Photo by Laura Alvarez, 17, Bravo Medical Magnet HS

I have been terrified of needles for as long as I can remember. It started with vaccinations—crying children all around and then a nurse stabs you with a needle. So I always avoided the bloodmobiles when they came to school.

But things started changing last year when I volunteered with the American Red Cross to fulfill community service requirements. A paradox, sure; the needle-hater volunteering with the Red Cross. But signing people in and passing out food was not the same as letting them stick needles in my arm.

Eventually, I decided to conquer my fear of needles and I signed up to donate blood for National Honor Society. Two days later I was trembling with fear. But I was committed to proving to myself that my fears were childish.

Friday morning came and I awoke to my mother’s angry glances. She said I was too weak and too stressed to give blood. I ate two bowls of cereal and an orange for breakfast. When you give blood, you have to eat enough to replace nutrients that will be lost during the donation. Once I got to school I saw that my appointment wasn’t until 12:30 p.m. I was saved for a while, but also stressed, because now my imagination had four hours to dream up unendurable pain and suffering.

At last 12:30 came and I headed to the lecture hall, with sweaty palms and butterflies in my stomach. After signing in, I waited for them to call my number. I waited for my turn to join the eight to 10 teenagers on stage lying in folding chairs, with needles and tubes sticking out of their arms. I became scared as I saw a nurse escorting one girl down the stairs; she looked pale and about to pass out. My number was called. I had to answer some personal questions, such as: Was I in danger of acquiring a sexually transmitted disease because of unprotected sex? Had I shared needles in the past? I answered no to all of them. As I looked around the room, it seemed that most of the senior class was donating blood. This made me feel better, like I was part of the group, that I was right being there.

My classmates were being called to the stage, where nurses injected them with needles as they lay on a bed for who knows how long. I started rocking back and forth in my chair. I heard the nurse call my name, so I walked up to the stage. She asked me whether I had left the country, if my family was at risk for some diseases and other health-related questions, a bit different than the earlier questions. Next, she rubbed my finger with alcohol and pricked my finger to test my blood’s iron count, then left to see if it was OK. The nurse returned and pricked my finger again, telling me there were some questions about my blood. Somehow giving blood didn’t seem like a good idea anymore. After the second try she said my blood was OK and that I could wait again. Another 15 minutes at the base of the stairs watching people get prepped for the needle. I had to look away.

When the nurse called me I climbed the stairs, took my package of tubes and bag and sat in a chair. She told me to lie back and grabbed my arm. I felt her swab alcohol on my arm and then iodine. The swab felt comforting yet alerted me that the needle wasn’t far behind. She found a tiny bump on my arm and said that my vein was too small for the needle. She asked other people if it would be OK, and one said, "It’s OK, [the blood] might take a long time to come out."

At that point I thought, "Great, I’ll be here for another hour." The nurse then brought out the needle, which was about as long as my index finger. The nurse slowly stuck the needle into my arm. I felt the needle go through my vein. Surprisingly though, I got used to the pain. The attendants told me to roll a piece of gauze in my hand to stimulate the blood flow. My little veins provided enough blood to fill the bag quickly, which was a surprise. After 15 minutes I was nearly done, even though the attendants told me it would take twice as long. The nurse’s assistant took the bag away but left the needle in my arm. Panic started again. The nurse came back though and filled some test tubes with blood. She told me they were going to test my blood, like they do for all donors.

When you’re finished you can pick out the color bandage they put on your arm, but the nurse didn’t ask me. She just strapped on a skin-toned bandage. I felt disappointed. I was told to drink five extra glasses of water or juices and not to skip any regular meals. With that I headed for the snack canteen and picked up juice and cookies. You’re supposed to rest for 15 minutes and eat something there so the Red Cross people can see you’re OK. But I had a pizza waiting for me in the library, so I left and headed for class.

It was already 1:45 p.m. and fifth period was almost over. Dizzy spells began to set in about 10 minutes after I’d left the lecture hall. Maybe I should have stayed in the canteen longer? I put my head on the desk and began to breathe slowly. The queasiness began to go away. I went through the rest of school fine. The experience wasn’t so tough. I think I’ll do it again, because as I see it now, needles aren’t that scary. As the posters say, I helped save a life and for that I am happy.

Be at least 17 years of age
Weigh more than 110 pounds
Not have given blood in the last 56 days
More detailed questions and eligibility criteria are determined on Donation day.

When you are finished, you will be given a form with:
• Information on care after donating (what to eat, how to clean wound, etc.)
• a number to call if you decide after you leave that your blood may not be safe to give to another person

Although most people feel fine before and after donating blood, a small number of people may have a(n):
• upset stomach
• faint or dizzy feeling
• black and blue mark, redness, or pain where the needle was

More information about giving blood is available online at www.redcross.org