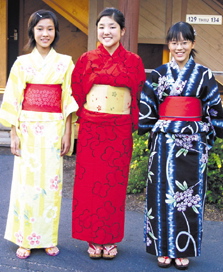 On a recent vacation, Machiko (center) posed in a kimono with her cousins who were visiting from Japan.
Photo by Junko Yasuda (Machiko's mom)

Growing up in the mostly white community of Palos Verdes, I was annoyed that my parents are Japanese immigrants. They stood out in public when they pronounced "work" and "walk" identically or said "Beverly Hills" more like "Bevaree Hiruzu."

In Palos Verdes, even though Asians are the predominant minorities, it still seemed like the Japanese immigrant parents were outcasts. Unlike other immigrant families, the majority of Japanese immigrants live here because they’ve been transferred as part of their jobs, and they know that they’ll be here only about five years. So Japanese families often don’t even try to interact with the locals.

My mom often asked me to help these new Japanese students adjust to my school, but I didn’t even like associating with these people! I didn’t want my classmates to think I, too, was a foreigner who couldn’t speak English. My mom didn’t care about that—she thought I was being a disrespectful brat for thinking that way.

What made the strain between my mom and me worse was being forced to go to Japanese school every week. My parents wanted me to be as "Japanese" as possible. I understood their reasoning, but I hated it. School was eight hours on Saturdays from first grade through 10th grade and all the weekly kanji (intricate Chinese characters used in Japanese) tests and pages of haiku poetry we had to write seemed pointless.

As I got older, my classmates and I sent a bitter message to the strict teachers at Japanese school and our unsympathetic parents. We refused to converse in Japanese outside the classroom. We didn’t care about the rules anymore.

My hate for the weekend school torture in turn fueled my disgust for popular Japanese music and fashion. At Japanese school and in regular middle school, I’d see classmates with their backpacks and notebooks covered with "Engrish"—nonsense English phrases like "Always Rerax Panda." I always overheard some classmates talking about new hit singles with titles like "Locolotion" or "Serenade" (pronounced like say-ray-nah-day)! I usually never talked to these ESL (English as a Second Language) students because they didn’t like mingling with the students born in the United States.

We used to nickname these students "fobs" (fresh off the boat). Even though I have the same kind of parents as the fobs, I was ashamed by the strange way these students dressed, with their blonde hair streaks and flashy clothes brands and obliviousness to American pop culture. In sixth grade, I didn’t know where to start when a girl who sat next to me asked what, not who, N’Sync was. And how could they still wear that Brooklyn, I mean, "Blooklyn" jacket, and that T-shirt with the word … "enjordelicious?"

When I go to Japan I always see my cousins obsessing over new American clothing brands and TV shows like Friends, so why weren’t the Japanese students trying to make the most out of living in the States? Weren’t they embarrassed that Americans often associated Japanese people with socially oblivious, bad drivers with "Engrish" clothing and little understanding of the language?

Pointing out Engrish errors became a game for my brothers and me. To my parents though, our "game" was an insensitive assault on their culture. Maybe they were scared that we would grow up to be less "Japanese" and more "American." But none of us were even thinking about that. We just hated having to go school on Saturdays with our uncool, "fobby" Japanese counterparts.

As the oldest child, I had to teach my parents about American customs that don’t translate well into Japanese culture: school dances, lockers on campus, drivers’ permits before students graduate high school or tryouts for school sports.

For my eighth grade graduation dance my mom went all out. I’m not sure whether she thought it was going to be like a ballroom dance or a club rave, but she made it a family affair. The weekend before the dance, my mom and grandmother, who was visiting for the first time in five years, spent hours dressing me in my overly-expensive, way-too-long, fancy pink gown. The other girls wore knee-length cocktail dresses. And no, Mom, you really don’t have to take so many photos and get them specially printed in large sizes!

Even my name has embarrassed me

Also, I have always disliked my name, Machiko (which is pronounced "Ma-CHEEK-oh"). Every year I brace for another creative, yet butchered pronunciation of my name during roll call on the first day of school. "Mockiko" and "Moshiko" are the most common ones. In sixth grade and 11th grade my name appeared as "MacHiko" in the yearbook. Why couldn’t I have a name that didn’t require a blank, puzzled look at Starbucks after I repeat it three times and then spell it out?

My resentment toward my Japanese background, however, started to change between my sophomore and junior years of high school. After three years of Spanish class, my parents let me participate in a Spanish immersion program at the Universidad de las Américas (UDLA) in Puebla, Mexico. I stayed in a college dorm for two weeks, right after school ended.

I had never been outside of the country besides Japan, and two whole weeks without any pushy parents or annoying brothers seemed like the perfect escape after a chaotic sophomore year. But I was scared that I wouldn’t fit in.

Only a day after the school year ended, I was on a flight to Mexico City. The last thing I was expecting after my arrival was a kiss on the cheek from Tania and Pedro, the two UDLA students who were going to help me settle into the school. I never get kisses or hugs from my parents, and here were two strangers kissing me on the cheek. Japanese people are traditionally more reserved, so it’s not common to show affection to your family like that. The way they were standing and talking SO close to me was different, too. It was such a contrast to the common Japanese greeting I’m used to—a bow from a respectful distance, not right in your face. After meeting a few more people I got used to it.

She liked Japan more than I did

During the bus ride, I sat next to Tania, a senior at UDLA studying Japanese and economics. She amazed me with her fluent Japanese and her knowledge of Japanese cities, even though she had never been there. She was able to talk to my dad, who was on his annual Puebla business trip, about what city she wanted to visit and what study program she wanted to participate in … and I didn’t even know what area she was talking about. How could a Mexican student learn Japanese so well in just four years, and familiarize herself with the people and culture so quickly? When I found out that some college students were studying so hard, it made me feel lazy about how I treated Japanese school.

Some of my roommates asked about my background: When and why my parents came to the U.S.? Do all Japanese people have small, slanted eyes? How did I learn to speak the language? Do I eat sushi with chopsticks at home? Could I write their names or words like "love" and "hope" in Japanese for them?

I’ve always had people ask me about my parents and where I learned to speak Japanese, but not any of the other questions. I hated the weekly kanji tests at Japanese school, but here my roommates were so intrigued by my writing. I was beginning to realize that maybe I had been wrong hating Japanese school so much. Now I liked being able to write everyone’s names in Japanese and teach them about the customs. Had I not spent my Saturdays with all those kanji tests I probably wouldn’t have been able to do that for them—and how embarrassing would that have been?

As I walked around the town center I was paranoid about saying something that I didn’t mean or doing something disrespectful. The students at my high school who had recently come from Japan probably felt the same way when they first moved to the United States. But, it seemed like everyone at UDLA, the cooks, security guards, students and my teachers, had at least a smile and a kind greeting for me. Even in the buses and around town the people seemed welcoming and didn’t mind answering my questions for help. I started to think that I should be just as sympathetic to the fobs. Now I regretted not being more considerate and helpful before, especially because I already knew the language and their background.

One of my most memorable experiences in Mexico was visiting an orphanage called Viva Esperanza . Inside the tiny, crumbling ivy-covered building, I got to play basketball and jump rope with the kids. I was shocked to see everyone, from the youngest to the oldest, all wearing uniforms and credentials with their full names and birthdays around their necks. These tags were the only things that made one child different from the other, and it seemed like everyone was so proud of and attached to their names. Some girls gave me a full explanation of their first and last names. I used to be so embarrassed by mine.

While riding the bus one day I sat next to an elderly woman who was born in Oaxaca. She spoke Spanish and Zapotec, one of the numerous indigenous languages of Mexico. She taught me some words in Zapotec, which don’t sound like Spanish at all. The way she was so determined about preserving her language, which is far less common in Mexico, was similar to what my parents wanted me to get out of Japanese school. They wanted me to be just like any other Japanese teen even if I lived in the United States.

Sharing my love of things Japanese

Now that it’s been a year since my trip, I’ve begun to look at my culture and background differently. The same things I tried to avoid talking about such as Japanese religious traditions or why my parents never hug me are things I don’t mind taking an extra minute to explain. I love meeting people who are curious and intrigued by my culture, and introducing my friends to my Japanese CDs and DVDs is fun. I only wish I had studied enough in school to be able to translate song lyrics and movie titles better.

I realize how lucky I am to be able to learn the language of my relatives and taste my mom’s authentic Japanese food, like her homemade California rolls. Now I listen to good Japanese music, too, minus the ridiculous "Engrish" lines. My iPod mini has more than a gig of Japanese music! It’s been more than a year since I graduated from Japanese school, and I’m writing more e-mails to my cousins and watching my parents’ television programs—two tasks I dreaded being forced to do in the past.

Now I don’t mind helping my friend (who two years ago I would have mocked) with her ESL vocab homework or orchestra class directions. I’m obviously not friends with everyone, but now I’m anxious to see if there are any new Japanese students in my classes or clubs.

I’m also more appreciative of my name (although the Starbucks issue is still just as annoying). I still remember the vivid image of the children at Viva Esperanza in their uniforms with their name cards around their necks. The cards seemed to emphasize how much they valued their names, names their parents probably gave them. At least I have a proper first and last name and I know how to write it in proper characters, too. It’s also nice to have an uncommon name that you don’t always hear around school and on television.