Growing up, I lived with my aunt in Long Beach. I got taken away from my mother when I was 3 because she used drugs and physically abused me. My aunt’s house was a real family to me. We’d do karaoke every Saturday. We would sing “R-E-S-P-E-C-T” and “Ain’t No Mountain High Enough.”

But things changed when I was in fourth grade. My grandmother lied to the authorities and said my aunt was abusing me. The police came out three times but never found signs of abuse. The fourth time they came, when I was 8, I got taken away. I tried to tell them my aunt wasn’t abusing me, but all the cops did was put me and my two cousins in the car. My cousins went back home, but guess what, they wouldn’t let me return home because they found bruises on me (I had jumped in front of a bowl my auntie had thrown because she had been frustrated that I was acting up). I told my attorney that my aunt never hit me, but they don’t listen to little kids.

When I first got there, my grandmother was great. For Christmas she bought me a big Harry Potter calendar book (everyone knows I’m a Harry Potter freak), a green bike and Rollerblades. She also took me to see Harry Potter and the Sorcerer’s Stone. But a year later, things changed when my grandmother began selling and using drugs. 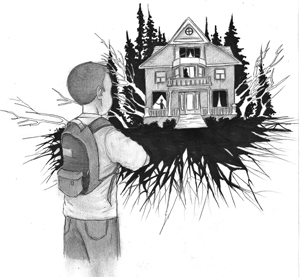 
If I said something wrong, she tripped on me. One time I woke up my grandmother to ask her if I could go to school early. She yelled, “Get the hell out of my face,” and threw her shoes at me. Another time when my grandmother and I were arguing, she told me that she had lied to children’s services about my auntie abusing me. My grandmother said the only reason she took me in was because she needed money to support her family. She got money from children’s services to buy food and clothes for me, but she used it to pay her bills and for drugs. I felt sick to my stomach. I thought she didn’t care about me and I felt like I was not really a part of the family.

Why did they hit me?

My grandmother would let my cousins sit around drinking juice and lemonade while I had to do their chores. It wasn’t just my grandmother who treated me like s—, but my other family members who lived there, too. My aunts and uncle would hit me when they were mad. But I was scared of them so I acted like a wuss. When my grandmother called me, I’d say, “Yes ma’am.” I wanted to say, “Why do you hit me? Am I really a bad child? Why do you treat me like I’m not part of your family?”

I’d pray at night that I could get out of there. But I didn’t tell anyone because I knew they’d call the cops, and I was scared that my grandmother would hit me if she found out I had told. When my social worker came every six months to check in, she’d ask, “Deshon, how is it here?” I’d say, “It’s OK.” But when she left I would cry because I wanted to tell her the truth.

In the backyard there was a huge tree. I climbed up there one time when I was 11 and started nailing wood to make a tree house. My tree house said, “Only Deshon.” That’s where I could get away, where I could be myself and have fun reading and writing in my journal. The tree house was like heaven to me because I had my Bible and I always thought that God or Jesus was talking to me, saying, “Only you can help yourself.”

I did other things to try to get away from my problems. I’d go to the library after school. I also started ditching school twice a week to get drunk and smoke weed with friends (the school never called my home when I ditched). It worked sometimes. I’d forget who I was and where I was. But when I got back home I’d be afraid of being whooped.

Once, I asked to leave but my social worker said, “No, this is a good placement” because I was living with my family. I was too scared to tell her my grandma was hitting me because I would have no family to go to. I was scared to go to a foster home, not knowing where my family was. Even though they abused me, this was the only family I had. I wanted to go back with my aunt, but I couldn’t.

My grandmother lived a block from my aunt’s house, but sometimes it felt like 30 miles away because children’s services wouldn’t let me talk to my auntie or see her. On the way home from school I’d walk past my aunt’s house. When I’d turn on her street, I’d smile and it would bring back memories of the fun times when we’d do karaoke and watch movies. I knew I couldn’t go in because my aunt would get in trouble, but it reminded me that I had a family waiting for me.

No one believed I was being abused

After years of holding it all in, I began taking my anger out on my friends or anyone who was around me. I also started talking back to my grandmother because I knew she was wrong and I didn’t want her yelling at me anymore. Once when she threw a cup at me, I told her, “Don’t you ever throw anything at me.” She grabbed me by the shirt and dragged me to her room. I yelled and screamed, “Get your damn hands off me.” She said, “You’re not really family. You’re just an adopted kid.”

One day when I was 14, my friends and I were having so much fun watching Jerry Springer at my friend Yvette’s house. That is until my grandmother found out that I had lied to her about being at the library and she came to get me. It was chaos. She was hitting me in the back of the head and pulling my ear. Yvette’s mother was screaming at her, “Get your hands off of him.” I told Yvette’s mom, “Please don’t call the police.” My grandmother pulled me by the ear all the way home. I went to my tree house and cried. I wanted to run away, far, far away, and never see my family again. I thought, “Why be here if I’m just going to get abused? Why be alive if I’m going to be hit and yelled at for no reason?” I didn’t know why it was happening to me. I wanted my grandmother to treat me with respect, to talk to me when she was upset instead of hitting me.

Later that year, my grandmother whooped me with a belt because I came home late. I finally had enough. The next day I had a meeting with my social worker and I planned to tell her. I was scared. My social worker saw the bruises on my neck and arm and asked me what happened. I said my grandmother hit me. This time she knew I was telling the truth.

That day I went to the doctor’s office and the nurses asked to see my bruises. After I showed them, they took me to a shelter. I felt happy because I was out of the house, but I was scared because I still thought my grandmother was going to find out and try to hurt me. A few days later, they arrested my grandmother and put her in jail. I went to court and they told me, “You’re safe now. Your grandmother can’t come within 50 feet of you.” When I heard those words, I jumped up and screamed. I realized that I was really safe.

Over the next two years, I moved around a lot to foster homes and lived with people I didn’t know. I was happy to be safe but I was sad because I was not with my family. I had nightmares that I might go back to my grandmother’s house, but I pushed those thoughts far back in my mind. Whenever TV shows came on with grandsons and grandmothers, I would get depressed. I watched this one show where the grandmother beat the grandson and I felt like it was me.

I thought about my aunt so many times. I wondered, “Why I am here?” I belonged with my aunt, not in a foster home. But eventually I ended up somewhere nice, a group home in Torrance, which had a lot of rules and support that they thought would help me with my depression. I was scared at first but I quickly got comfortable when I started getting to know the staff members and the other kids who lived there. The staff treated me with respect. One time I cursed out a staff member named Nicole and she ended up talking to me for an hour about my behavior. After that I always called her “Mommy.”

I still sometimes took my anger out on my friends, but I realized that if I kept doing that I was going to lose them. What helped is that I started talking to my therapist. He was really, really cool. He was ghetto—he was white and listened to Tupac. I told him how I felt about moving around. He didn’t let me talk about my grandmother because he said he knew what I was going through. He said, “Even though I’m an adult, you’re stronger than me. I’ve never been through what you’ve been through.” I got up and gave him a big hug.

I felt safe and loved again

What also made me happy was that the foster care system finally let me see my aunt on the weekends. My auntie would pick me up and we’d go to her house and hang out, listen to music and she’d barbeque. I felt lucky to be in foster care, protected from my grandmother, and I still got to see my aunt. My favorite time was when my aunt took me and my cousins to Six Flags. When we got there, we prayed and thanked God that I was there with them. It was my first time on roller coasters because I’m scared of heights. On Tatsu, I closed my eyes and squeezed my cousin’s hand. On Freefall, my aunt’s hair was big and she was screaming, “Are we done yet?”

I left the group home in July after living there for a year and a half and went to a group home in Long Beach that was less restrictive. It was hard to leave my friends. But I was proud because I wasn’t depressed anymore. I’d learned I can talk to someone when I’m feeling down and not isolate myself.

To this day, I’m not fully over what my family did. Thinking about it makes me cry, but I wanted to write this story to share my experience with other kids who have been abused so they know that they are not alone. I want them to know to talk about it with someone. If you don’t, it’s going to be like a soda pop—if you shake it, it will explode. That’s what happened to me. Somebody shook me and I exploded open.

I don’t think about it too much anymore. The past is the past. I think about the future. I plan to go to college and I have dreams of becoming a fashion designer. Looking back, I think, “Boy you went through a lot.” I’ve overcome a lot and I’m happy now.