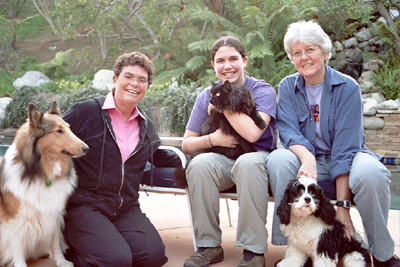 Katie Love-Cooksey, 15, says having lesbian parents doesn't make her feel different from other teens. She and her mothers, Susan Love (left) and Helen Cooksey, posed for this photo in the backyard of their home.
Photo by Managing Editor Libby Hartigan

The initials stand for her moms, Helen Cooksey and Susan Love. At first, I was shocked. I had never known of a lesbian couple raising a child. Still, I did feel proud that Marlborough, which is usually considered to be a rather conservative all-girls school, would open its doors to diversity beyond the usual black, Latina and Asian girl.

After my initial reaction, I wondered who the girl was and what it must be like to live in a family with two mothers. Is she embarrassed? Is she proud? Maybe she’s a lesbian herself, I thought. And what about her dad? I remember thinking that if I had lesbian parents my life would be very complicated. Too complicated. I would have to deal with homophobia. And the idea of having another mom worrying about me and telling me what to do made me nervous. One mom is enough for me!

Katherine Love-Cooksey, or Katie for short, was born in April, 1988. She lives on the top of a hill overlooking the Pacific Ocean in the Pacific Palisades, in an airy, light-filled home. It was scorching hot as I walked up her driveway and rang the doorbell. Immediately, one of Katie’s moms opened the door and I was welcomed in by the cool air-conditioning and the playful jumps of a rather large dog. Katie soon came downstairs, dressed in a loose T-shirt and shorts, and smilingly said, "Hi! How are you? How was your summer?"

She then led me into the den and we sat on a big comfy couch facing her moms, Helen and Susan. Both are doctors; Susan Love is well known for her important contributions to breast cancer research. Because of their jobs in the medical field, Katie’s moms say, "they knew how to do it," meaning they understood the options for having a baby in a lesbian family.

They knew they could go to a sperm bank where donors would provide sperm, and the egg would be fertilized through artificial insemination. The donor can be anonymous, a relative or a friend. Another option is to find a birth mother who volunteers or is paid to carry the child. Also, there is the possibility of adoption in California, although some states ban adoption by gay or lesbian couples.

In Katie’s case, both her moms wanted to be related to their child, so Helen’s cousin donated his sperm to Susan, who then carried the baby. Even though Helen and Susan are both Katie’s moms, the law only recognizes the biological parents as legal guardians. So if Helen and Susan got divorced, Susan could take Katie away from Helen without her consent, even though Helen had acted as a mother to Katie.

Because of this, they decided to sue the government so both Susan and Helen could be recognized as legal guardians. The case made it all the way to the Supreme Court in Massachusetts, where they were living at the time. Katie was the first kid who was legally allowed to have two moms.

Despite living in a prominent family, Katie is very down-to-earth. Her favorite hobbies include reading, swimming, spinning thread, making jewelry and watching the TV show The West Wing. She has a spinning wheel in her room—that’s right, like the spinning wheel Sleeping Beauty pricked her finger on—which she uses to make thread from her dog’s hair. Her house is full of books of all types, and she jokes that in her house, "The only rooms that don’t have bookcases are the bathrooms." She loves Mercedes Lackey’s book series, whose "main character just happens to be gay."

Soon after, I found out that a couple of other girls with gay parents also attend Marlborough. When I first came to the school, I didn’t think there would be a lot of diversity. I guess I didn’t understand that diversity doesn’t necessarily mean that people are poor, live in a bad neighborhood or have dark skin. It can mean that they are white people from Pacific Palisades.

L.A. Youth: What do you call your parents?
Katie: Helen is Momma. Susan is Mommy.

L.A. Youth: Do you have any contact with your dad?
Katie: We send each other birthday cards; he’s a math teacher at Berkeley.

L.A. Youth: When did you realize that you were different from the other kids?
Katie: I never did realize. I just figured everyone was different. It’s always neat to see people’s reactions [to my family history].

L.A. Youth: Describe some good experiences that you think only you could have experienced.
Katie: Having two mothers makes it easier to not be biased about things. Or to realize when you’re biased and how to change that.

L.A. Youth: How about at school? Did you ever have any negative experiences?
Katie: I went to UES [University Elementary School in Westwood]. When I was applying, the school was told that both my parents are doctors. And they said, "Oh, we have plenty of those." But then they said that this girl has two mom doctors. And then they said, "Oh, we don’t have one of those. We’ll take her!" UES prides itself on being really diverse. It was welcoming. Everyone was different in some way or another.

L.A. Youth: Any bad experiences?
Katie: Going to gay pride marches and seeing people with "God Hates You" signs. But one time a couple ran up and took a picture in front of it!

L.A. Youth: How do you feel about people who are anti-gay or homophobic?
Katie: I guess I feel sorry for them. And when you’re in a community, you know there are other people like you there, and we’re accepting of each other and you don’t need to know that these other people accept you to feel OK about yourself. The only ones they’re really hurting are themselves when they’re standing there yelling at people when they could be out doing something productive and something fun. I wish they would accept the fact that there are gay people in the world and that they’re good people, but mostly for their sakes, not ours. "Hate hurts the hater more than the hated." It’s really wasting their life to be hating people.

L.A. Youth: So did your moms get married?
Katie: Yes. Momma and Mommy picked me up from school one day and said "Hi! We’re going to San Francisco today!" We stood in line all through Sunday.

L.A. Youth: How was it to stand in line for so long? What were the other people like?
Katie: It was interesting to hear all the people talk. There was this nice couple with a baby who kept digging up worms. Someone kept coming up the line with rainbow cupcakes. There was this one man who walked up and down yelling things like "You’re ugly!" but he was followed by another man with a rainbow sign that said "Love is Beautiful."

L.A. Youth: How did your moms feel about getting married?
Katie: Like "Now we can do it. We’ve waited all this time and it’s finally happening." It was utter joy that they were able to [get married]. There were three or four ceremonies going on at the same time. They used almost the same words as a regular Christian marriage except replacing husband and wife with "spouse for life." Momma and Mommy have started calling each other "my spife."

L.A. Youth: Do you belong to a religion?
Katie: We’re Episcopalian. They both converted recently. They were both Roman Catholic and I was baptized Roman Catholic but Momma wanted me to grow up in a religion where women could be priests/pastors.

L.A. Youth: Which church do you go to? Did your moms have a religious ceremony?
Katie: St. Matthew’s. There’s no formal ceremony yet, but my parents want a
ceremony.

L.A. Youth: Some people argue that homosexuals should not be parents because they cannot provide both a male and female influence in their kid’s life. How would you respond to that?
Katie: I think in my life overall it is important to have both influences—male and female—so you know how to live in the world, since there are people of both genders in the world. But the influence doesn’t have to come from a mother and a father. I think the male influence comes from some of our friends and lots of uncles. My friends invite me to the Father-Daughter picnic at Marlborough and I get to adopt their father for the day!

L.A. Youth: Do you think that being a daughter of a lesbian couple has in any way shaped your own sexuality or how you perceive sexuality?
Katie: I have no idea. It’s made me feel that I could do either one and that won’t really matter, but I’m reserving judgment on that for a long time from now.

L.A. Youth: What are some of your goals?
Katie: Survive junior year. Learn how to speak as many languages as fluently as possible.

L.A. Youth: What did you do last summer?
Katie: I went to the Lesbian Physicians Conference. Lots of fun. I mostly went around with my friends there. One of them has three moms! I like that I don’t have to explain things to anyone there.

L.A. Youth: Describe something that makes you angry and sad.
Katie: Our government. When people can be so blind to look just at their own way of thinking. [Author] Mercedes Lackey said "There is no one true way." Like in religion. Different religions are just different people’s ways of looking at spirituality. It’s just individual perceptions and tastes. Even being atheist is just their way of looking at the universe. If that makes them want to be a better person, then good for them.