*We are not publishing the writer’s name to protect her friend’s privacy. Her friend’s name has been changed. 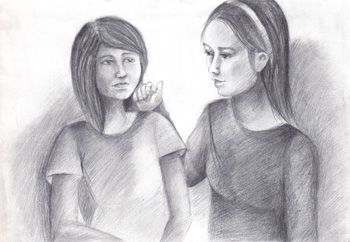 One day while walking home during freshman year, I was talking to my friend Natalie about how boring my health teacher was. But instead of giving me advice she was looking at the ground.

She took a deep breath and then started telling me about what happened when she visited her 15-year-old cousin a few days before. Clenching her hands into fists, she told me that he sexually molested her. They were playfully wrestling in his room and then he started touching her crotch. After a few seconds she shoved him off and left the room terrified. He had never done anything like that before but she knew that it wasn’t right. When she finished her story, I was shocked.

We stayed quiet for the rest of the walk to our homes. I went straight to my room. I couldn’t concentrate on my homework. I wondered what would happen to her. What’s going to happen to her cousin? I didn’t tell anyone because I thought that Natalie needed her privacy.

At school the next day we tried to act normally but I could feel a tension. I couldn’t ask her how her day was without it feeling awkward. I kept trying to think about what I should say and what I should not say. That evening my mind raced with questions. What would a caring friend do in this situation? Can someone help me? That was one of many restless nights.

We needed to tell someone

A week later Natalie told our group of friends about what happened to her. Everyone was saying things like “Oh my god. Everything’s gonna be OK.”

“Everything’s not gonna be OK,” I said. “We can’t just let this slip past. It’s something really serious.” After I said that everyone stayed quiet as we thought about what we should do. We remembered that Natalie was really close with one of her middle school teachers, so why not talk to her? Natalie hesitated.

“Are you sure she’s even gonna listen to me?” she asked.

We told her that since they still talk, why not try. After the bell rang, she and I kept talking and she said she was scared to tell her parents because if she did, it would create bigger problems. She also said she didn’t think they would believe her. Her cousin was the family angel, and she had no evidence to prove that he did anything. It saddened me that when she needed her parents most, she felt like they wouldn’t be there for her.

Three days later I went with Natalie to talk to her former teacher after school. I was nervous but I felt like I needed to be strong for Natalie. On the walk there, she kept saying, “Let’s turn around.” But I wouldn’t let her. I knew she wouldn’t have gone through with it if I hadn’t come along.

We showed up and I told the teacher that Natalie needed to tell her something. Then I went out to the hall and talked on my phone as they talked privately for two hours. I felt glad that I had helped Natalie and confident that her former teacher would help.

When she stepped out of the classroom her eyes were red. During our walk home she told me that her former teacher had set up an appointment with the school psychologist. I felt a sense of relief because I knew she was going to get help from someone qualified. That night I was finally able to sleep. The next day she thanked me for convincing her to talk to her teacher. It cheered me up to see that at least I was able to do something.

The night after her appointment with the psychologist she called and told me what happened. When she had arrived for her appointment her parents were there. She didn’t expect that. The psychologist told her to tell them what happened. She said that her parents didn’t say anything during the meeting, but when they got home her mother didn’t believe her. And her father was furious. She told me that it was like he was about to go hunting for her cousin.

The police were also notified. They told her to avoid her cousin’s family and that she should press charges against him. But she didn’t want to because that would be too hard to deal with. She wanted everything to just be over.

During the next month Natalie always kept her head down and was very quiet. And it seemed as if she was always angry. At times she would randomly punch one of our friends in the shoulder.

I tried to get her to talk to me

One afternoon, I reached over and put my arm on her shoulder as we walked out of school.

“What’s the matter?” I asked. “Looks like something’s eating you alive.”

Natalie looked down at me, giving me the death stare. I had never felt so uncomfortable. I gently lifted my arm off her shoulder and waited for Natalie to respond. As the seconds passed more tension built up. She looked at me and then she looked down and said, “All we do is argue at home.”

We kept walking and I looked down at her watch and had an idea. “All you have to do is put your anger on this watch and throw it as hard as you can against the wall,” I said. “Trust me, you’ll feel better.”

She looked at me as if I were crazy but then grabbed her plastic watch. She threw it with all her strength and it made a hole in the apartment wall outside. She threw it a couple more times while cursing at the watch. Then we walked back home, Natalie smiling all the way, holding her dented plastic watch.

Her happiness didn’t last long though. A few days later she was sad again and that continued for the rest of the school year. I tried  not to let it bother me. I didn’t resent her even though I had sacrificed a lot of my personal time for her, but there were a few times when I felt annoyed. I tried so hard for her but she wouldn’t be happy for more than a minute. I felt unappreciated.

Once summer break started I didn’t hear anything from Natalie. I lost track of how many times I asked in e-mails and voicemails, “Are you there? Are you alive? Why are you ignoring me?”

One evening in August Natalie finally called me. I was so relieved.

“I wanted to commit suicide,” she responded in a sarcastic tone. “That’s what’s up.”

“I didn’t know what do to, no one can fix my problems!” she said. “I’m better off dead! It seems like no one even cares about me! I can’t take it anymore!”

I snapped at her and said, “You just scared the crap out of me! Does it seem like I don’t care? How dare you even say such nonsense! I know that you are going through a tough time but you have to realize that you’re not the only one involved. You will never fix anything by trying to run away from it and it’s nothing but being selfish. You think that no one cares or loves you. You don’t even think about your little brother or your parents! I know it may not seem like it but they all do care!”

She needed a wake-up call. It was so frustrating that she had kept it all bottled up after I had tried so hard to help her out.

I asked her why she hadn’t talked to me about this. She said that she felt unloved and unwanted. She started to cry. I realized that I had never really put myself in her shoes. I thought that the problem would eventually go away. I didn’t know what she was going through. I felt guilty; I should have hung out with her more often.

“Killing yourself will never solve anything. Your family does love you and your friends do too. Never make such a tragic decision ever again because the next time I see you, it better not be at a grave.” The words just came out of my mouth like I had memorized them. To me they sounded like words that only wise people would say, not me. I hoped that she listened.

After talking on the phone with her for three hours I knew that she needed to go to back to her psychologist. I spent most of the evening in my room thinking about what I should do. Before going to bed I told my big sister everything. I didn’t want to tell my mom, because I thought that she wouldn’t want me to be around Natalie because it might affect me in a bad way. My sister told me to just be there for Natalie. After that I fell fast asleep, exhausted from thinking too much.

Natalie called the next day, her voice cheery. She told me that she had seen her psychologist and told her everything about what had happened during the summer. Her mother’s side of the family was still in denial. They couldn’t believe that her cousin was capable of something so horrendous. They said that Natalie was craving attention and making up stories. Natalie was furious when she told me this part. That didn’t matter though, because her mother finally believed her.

She also said that she was looking forward to starting school and hanging out with her friends. I felt so relieved.

“I think I can do this,” she said. “You were right. I can’t run away from my problems, I have to face them.” I was happy and proud of her when she said that.

I wish I could say that this was the end of Natalie’s problems. But in 10th grade she had other problems. Eventually she became depressed again and she almost killed herself by overdosing on pills.

I realized that listening was the best thing i could do

But this time we knew better how to help. Her family became more understanding; they listen to her, spend time with her. My friends and I always ask her how she’s feeling. Natalie’s happy and in a better position than she was back then.

I never thought I would be in a friendship that went through so much. It was exhausting physically and mentally. But it helped me to be more patient and understanding. My friendship with Natalie grew stronger and closer. Sometimes I’m the only one who she tells things.

I learned that friendship isn’t about just having fun. It’s also about trying to help a friend when something horrible happens, even when I didn’t always know how to help her. I’m glad I could be there for her.

If you’ve been a victim of rape or sexual assault, you can get support and referrals to counseling centers by contacting: