A couple years ago at my cousin’s Sweet 16, my partner in the court of honor didn’t want to dance. So I grabbed him and dragged him onto the dance floor. The reggaeton was already blaring. We were dancing face to face about a foot apart, but as the song progressed we danced closer and closer until our bodies were pressed against each other. Then he grabbed my hips and held me tight against him.

Then they played some merengue and after that he didn’t want to dance with me. I felt used, because I wanted to dance with him to all types of music but he only wanted to freak-dance to reggaeton. I wished he saw dancing as a way to have fun, the way I did. When I’m dancing with my friends I don’t worry about anything (even how I look while I’m dancing) and all the stress in my life just melts away. I like dancing so much that I take dance classes. But when I was dancing with him, I wondered every second what people thought about me. I totally went against what I believe in—that the purpose of dancing should be to have fun, not to release sexual tension—just to please a guy. I hoped my mom didn’t see me.

It looked so sexual

Unfortunately, I see too many teens who seem into freak dancing. The worst was a few months ago. While dancing to some reggaeton at my cousin’s quinceañera, I noticed a group of three girls and five guys grinding on each other. One girl kept bending down until she got on her hands and knees, while one of the guys grabbed her by the waist and moved his hips against her butt. The grossest thing was that I saw one girl’s underwear. It was like pornography on the dance floor. 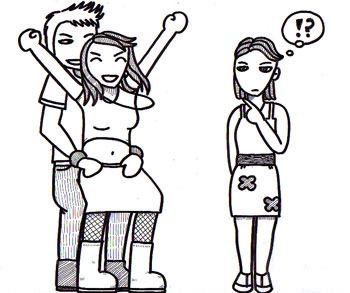 
This inappropriate dancing went on for like an hour. I kept wondering, “When are they gonna stop?” My group of friends and I kept dancing but we tried to separate our group from theirs. I didn’t want my parents to think I thought their grinding was cool or that I wanted to do it.

What made it worse was that there were 5- and 7-year-olds watching and even parents. I thought a parent or some adult would tell them to stop. Even though my mom gave a disapproving look, she didn’t stop them and a few seconds later she actually giggled with my aunts. It’s not that I wanted my mom to stop them (these weren’t her kids), but I was disappointed none of the adults did anything. That group kept dancing like that for the rest of the party. I just tried to ignore them.

I have seen freak dancing at school dances, too. A Halloween dance sophomore year was my first school dance. I went with two of my friends and the three of us were having a great time dancing to cumbia and merengue music. Then one of my friends disappeared for like 20 minutes and when she came back she was telling us how she had freak danced with a guy. She sounded happy, like she just won something. I asked her why she did it and her only response was, “The guy was cute.” I thought to myself, “What are you doing?”

Of the 30 or so students there, almost all of them were grinding whenever the DJ played reggaeton. Grinding isn’t against the rules, according to what I’ve seen in my school’s discipline handbook. There was only one teacher supervising and she wasn’t even there most of the time. When there weren’t enough guys, girls would grind on each other. There was one boy-girl couple that grinded on each other to every type of music. There was no need to grind to cumbia or merengue! I thought they looked ridiculous.

There was a guy I was interested in dancing with but another girl beat me to him. When they started dancing freaky I thought, “Well, he probably only wants to dance like that so he wouldn’t want to dance with me.” I didn’t care about dancing with him after seeing that; I wasn’t going to degrade myself.

There is no need to dance like that. I know that so many videos show it, but I don’t care if it’s popular, I think it’s nasty. I mean smoking weed could be popular but you don’t have to do it. I feel that when girls do this, they are disrespecting themselves.

I’m also disappointed in the guys, who are taking advantage of girls and exploiting them by touching them inappropriately. I’m proud that I don’t dance like that, because I’m setting an example for other girls and most importantly, my little sister. I want her to respect herself while still having a great time dancing at parties.