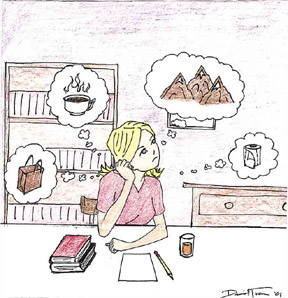 It’s Friday at 2:59 p.m. and the school bell is about to ring. It’s been a grueling week of classes. Essays and finals have consumed my life and I can’t wait to be free of it all. I stare at the clock and wait for 3 p.m.

RRRIIINGGG!! Ah, the beautiful sound of the school bell and now my weekend can officially begin.

But wait! I forgot that I live in the Valley. As us Valley people know, the word is synonymous with BORING. Yes, it is true. Now the weekend-in-the-Valley curse is upon me and I must find something interesting to do with my free time. There are a variety of things to choose from.

Or going to the mall.

Or maybe the very original idea of going to the mall.

There has to be something else to do. Let me think though—there is nothing to do at night! No promenades, laser tag or roller rinks close by my town of Shadow Hills. Nope. Only malls.

It’s hard to live in the Valley and have a life at the same time. The reason the Valley is so boring is because it’s in such a bad location. Everything, even the malls and movie theaters are spread all over the area. You need a car to go anywhere. I am one of the few lucky Valley girls who actually have a car. Most teens here don’t. If I have a hard time finding something to do, then imagine the people without cars.

To give you a good idea of what most of my weekends are like, I’ll give you a run down of what happened just a few months ago. It was Saturday night and my friends and I all took the SAT exam in the morning. We wanted to celebrate the completion of this torturous test, so we decided to go out to dinner and catch a movie.

But that meant we had to do a lot of driving and closely watch our time. We headed to Burbank, a 20-minute ride from my house. Burbank is the closest place to my house that has the most stuff to do. We went out to eat, but waited forever for a table. By the time we got out of the restaurant, we missed the movie. All the other movies were much later and we wouldn’t be able to see them and make it home in time for our curfew.

So we decided to catch a Christmas parade held near our homes. By the time we got back to my town, the parade was over. My friends and I spent the rest of the time we had left watching street cleaners sweep up remains from the parade. That is pretty much what happens every weekend in the Valley.

Stock up on toilet paper

A big pastime here is to T.P., short for toilet paper, someone’s house. Contrary to its negative connotation, this is considered a friendly gesture in the Valley. If a friend wraps your house in toilet paper, then you return the favor. This kind of battle can go on for months and in my case, years.

Just the other day, a bunch of guys from the football team were over at my house and naturally we were bored. The only fun thing we could think of doing was teepeeing our friend’s house. So all the guys painted their faces in camouflage, equipped themselves with many rolls of toilet paper—and we were off!

Now I wouldn’t recommend doing this to just anyone. I’ve had T. P. wars with this particular friend for years and this time a parent accompanied us. We drove up to his house and then decorated it with rolls and rolls of white toilet paper. By the time we finished, it looked like it had snowed!

We escaped just before my friend caught us, but not in time for him to realize who the culprits were. Let’s just say that it’s my turn to be teepeed.

Another big thing to do around here is hang out at In-N-Out Burger. Yes, I know it sounds pathetic, but it’s a very popular place in the Valley. Once school lets out, it’s almost impossible to drive past the fast food joint. The lines curve around the corner and there is an average of a 15-minute wait for your food. Forget about finding a place to sit, because all the tables are packed with people.

Crank up the Mozart

My best friend and I love going there. Our favorite thing to do at In-N-Out is to go through the drive-thru, unroll the car windows and blast classical music. Yup, I said classical music. The two of us will rock out to Bach or Mozart. It’s hilarious!

At first everyone in line looks at us like we’re crazy. But after a while, they all start cracking up and getting into the groove of the music. If you live in the Valley, or anywhere else, I highly suggest going through the drive-thru at an In-N-Out and blasting classical music.
Yeah, the Valley is boring. But at least it forces teens to use their imaginations.