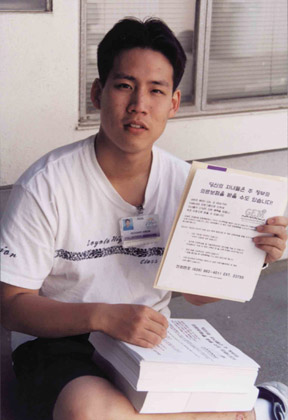 She was nearly broke, and with the little money she had in her pockets, she managed to care for two young kids whose mother sits in jail. There was no money left over to take care of her nagging tooth. She didn’t have any insurance. Until two years ago, she was on welfare. Family members couldn’t offer a loan.

Things looked dismal until she called GEM, known as Get the Enrollment Moving. It’s a project funded by the government to enroll low-income California residents to Medi-Cal, Healthy Families and California Kids, all part of the state medical insurance program. It’s also where I volunteer through West Covina’s Queen of Valley Hospital.

When I spoke with this woman, her whole unfortunate story unraveled. I told her she was eligible for insurance and set up an appointment to fill out her Medi-Cal application while many thoughts swirled through my head—sympathy, appreciation and most of all, relief. It would break my heart to tell her that she wasn’t eligible for any insurance. My sympathy toward these people was something I learned on the job.

When I started volunteering at the hospital during my sophomore year, I had two goals in mind. First, I had to fulfill my school’s 50-hour community service graduation requirement. I also wanted to pile up community service hours for my college resume.

At first, my hospital tasks consisted of taking patients in wheelchairs to their cars, carrying lab specimens, folding letters and delivering flowers—not really community service, but office work. These chores didn’t motivate me at all.

As the school year went on, I had to fulfill another school requirement called senior project—a popular tradition among seniors. For three weeks in January, all seniors are required to work directly with low-income people in community service agencies during school hours. We serve others instead of taking classes. Many seniors, myself included, thought of this as a vacation and took "whatever" attitudes toward our agencies.

My senior project was at the same hospital. I met with their volunteer supervisor who put me into the GEM project office. For the first few days, my work seemed exactly like what I used to do. I collated documents, entered office data and did paperwork.

I began to feel for the clients

I filed client profiles and couldn’t help but read their shocking stories. Many clients are single moms and usually have more than one child. Some are disabled. Some are senior citizens. All of them are financially needy. I read through nearly 300 profiles. Not one client has a monthly income higher than $3,000. Some earned less than $2,000 a month. This shocked me. Before this, I was swayed by stereotypes of poor people and expected them to be on welfare and supported by the government. To my surprise, most of them worked full-time. They are not lazy, but have jobs that pay very little, making it difficult to get by in our expensive city.

As I learned more, I began taking phone calls from potential clients. I set up appointments and filled out application forms. Glad to be doing something other than paperwork, I was excited and tried to do my best. On the phone I was as receptive and helpful as possible. It was great to work directly with people.

With every phone call, I became better at informing callers about insurance programs. I had to ask questions about their families to see if they were eligible.

Some of them had moving stories. One single mom was fired and had no medical insurance for her son. Another woman called after her husband left her and their three kids for another woman. In one case, a 20-year-old woman took care of foster kids and needed insurance. These stories gave me a reality check. I realized how lucky I am, when I saw how many others aren’t.

The first client I interviewed was pregnant and only a year older than me—19. She had just separated from her husband, but wouldn’t explain why. She wanted to use her maiden name in the application. But when I asked if her maiden name was her legal name, she didn’t know. I shuddered to myself. I thought about how bad her husband must have been to her. She didn’t want any part of him, not even his name. She lived with her parents and worked part-time in a grocery store. She had no medical insurance for her baby or herself.

As I listened to stories like hers, mixed emotions ran through my head. I was shocked and frustrated. From watching movies and TV, I thought I knew about the devastating effects poverty has on people.

But I was wrong. It’s worse than I thought. When I talked directly with people hit by poverty, I felt disturbed. I couldn’t even imagine myself in their situations. Most of their problems weren’t just about money. Poverty causes family problems, health problems and enormous psychological stress.

I felt sad for these people. I tried to empathize with them, but for me to say that I fully understand their pain is hypocritical. Still, I wanted to help them as much as possible. I wanted to do more than give insurance information. But I’m only 18 and don’t have enough life experience to give them the advice they need and can’t give them money for their financial problems.

But I was able to do one thing—listen. Many clients seemed happy when I listened without interrupting them. Just doing that seemed to ease their stress, and they became less anxious.

I’ve thought of other ways to help out. Since I’m fluent in both English and Korean, I could translate calls from low-income Korean-speaking people. My supervisor loved my idea. So I took a class to learn more about the California medical programs. Then I translated a GEM flier into Korean. The flier was distributed to local Korean markets.

My required community service ended in January, but I have continued at the hospital part-time on weekends. Working with real people who need help made me realize that I was making a difference.