Last August, my sister and I were invited to our friend Elizabeth’s quinceañera. It was my first time going to a quinceañera, so I was excited. I hadn’t seen my friends much over the summer and I wanted to catch up with them. At the party, my friend Adam was sitting at my table.

“Hey Adam,” I said. “Hey, hold up I’m busy,” he said. I asked him what he was doing and he told me he was texting a girl. He just sat there texting for most of the party. He didn’t even eat. I was frustrated because I hadn’t seen him in weeks. My friends and I tried to get him to stop texting and start socializing with other people. We asked him to dance, but he just sat there texting. When I hang out with my friends and they’re texting it bothers me because I feel like I’m not that important to them.

Technology makes it easier for us to interact and connect. I get my grades through e-mail from my teachers and I like to instant message my friends to talk about how the day went. My mom can call me on my cell phone to say that she’ll pick me up 10 minutes late. But sometimes we lose control of how to use technology and sometimes I feel like a lot of my friends would rather interact with small machines instead of real people.

There are times when it’s OK to text, such as to remind or ask a friend about something, or if I’m really bored and there’s nothing to do and no one to talk to. I used to text a lot. Whenever it was hard for me to fall asleep, I would pick up my phone and start texting my friends until it was well after midnight. But I think that constant texting is inappropriate when I’m with my friends, in class, at a family dinner, at church or at the movies. 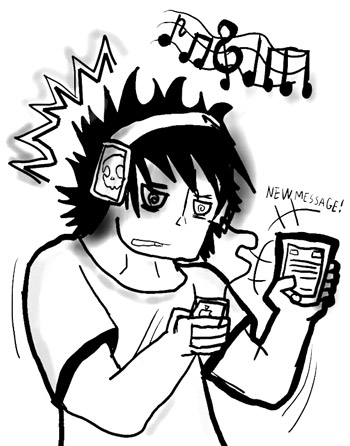 
I have friends who forget the proper ways to communicate with other people because they overuse technology. Recently, my friend Jane’s hand was numb for some reason, and she couldn’t write very well. “What’s wrong with my left hand?” she said. And then someone joked, “It’s not right!” Apparently, Jane thought it was funny because she said, “LOL!”

LOL? Is that what we say now when we think something is funny? When someone’s going to leave, some of my friends say “TTYL.” It feels like all this texting and instant messaging is ruining the English language. If someone thinks that something is funny, I think a good response would be a laugh—a real laugh—not “LOL.”

When a friend asked me to review her essay, I saw that it had some errors. She had written the lowercase “I” and wrote “u” instead of “you.” I wasn’t shocked that she’d let that into her writing for school because I used to do that too, so I understood. I told her to be extra careful because I heard that teachers get upset when they see mistakes like these. Another friend, Adrian, e-mailed our science teacher, Mr. Okazaki, and asked him for a recommendation letter to volunteer at a hospital. Mr. Okazaki got a little mad when he read the e-mail. “I know you want me to be your buddy, but if you’re going to e-mail me, especially about something like this, you should be more formal,” Mr. Okazaki told him. I used to do what Adrian did, but now, I’m more careful when I’m e-mailing my teachers. Sometimes I write “u” instead of “you” in my homework, but I review it before I turn it in to see if I made errors.

He couldn’t hear me through his headphones

At school earlier this year when I was helping my friend with his math homework, he was listening to his iPod at the same time. “Why are you listening to your iPod if you’re already having problems with math?” I asked him. “I can concentrate more when I’m listening to music,” he answered.

Apparently, listening to music didn’t help him concentrate because he started humming and stopped working a few times. At one point he asked, “What am I doing again?” Sometimes I had to repeat myself because he didn’t hear what I had said. I could have been hanging out with friends or doing my homework, but I chose to help him. I was frustrated and confused because he asked me for help but it didn’t seem like he really wanted it.

I think the problem is that we’re using technology too much. I think we should use our phones, iPods and instant message less. It’s more fun to talk to people in person. You see the reactions to what you say and it strengthens friendships. People are missing out on life when they use technology instead of talking to the people around them, especially if those people are important to them.