When my editor suggested I write a story about the U.S. Census, I didn’t know much about it. I knew it had something to do with statistics but I didn’t understand what it was used for. I wanted to write this story to learn what it is.

The purpose of the census is to make an official count of all the people living in the United States. It’s required by the Constitution, which says that every 10 years there has to be a count of the population. In March, the 2010 Census questionnaires will be mailed to homes all over the United States. They should be mailed back to the U.S. Census Bureau by April 1.

With the help of my editor we got in contact with Jennifer Giles at the Census Bureau’s Los Angeles office and also looked at the Census Bureau’s website (2010.census.gov). I found out that the census is important because it determines how $400 billion in federal money is distributed each year to states and cities. Knowing how many people live in a community tells the federal government how much money is needed to build schools, libraries, hospitals and to spend on road improvements. Not answering this survey means we lose out on money. 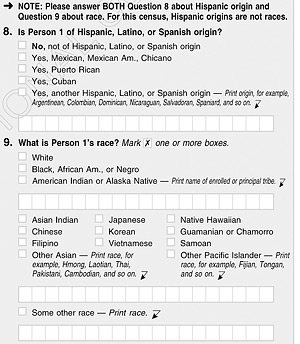 This is part of the 10-question census form that will be mailed to homes in March.


By filling out the census, your community gets more money for public services, such as city sanitation for recycling programs. There is money for job training programs. Not answering this survey takes money away from our communities. So it benefits us all if everyone turns in their forms. Tell your parents about the census and encourage them to fill it out. If they don’t understand English you can help them fill it out.

Some people don’t fill out the census because they are afraid of what could happen if they reveal their citizenship status. The census form doesn’t ask about immigration status and the information that is collected is confidential. There’s no need to fear because by law, the Census Bureau cannot share any personal information from the census with law enforcement. Names, addresses and telephone numbers cannot be given to the FBI, Immigration and Naturalization Service (INS) or any other government agency. If any census staff violates the law, they can be fined $250,000 and jailed for up to five years.

When I heard that the census asks for your personal information I was against it at first because I wondered how confidential it was. But now I agree with it because I know what it’s used for and that my family’s information is protected.

There are 10 questions and it is estimated to take about 10 minutes, one minute for each question. The form asks simple questions like if you own or rent your home, how many people live in your household, what their race is and how old they are. There are surveys in English, Spanish, English and Spanish (bilingual), and four other languages.
Another reason people don’t fill out the census is because they are too busy or they may not want to answer personal questions, like one that asks, “Does this person sometimes live or stay somewhere else?” and one of the choices is “In jail or prison.” Giles said the Census Bureau is just trying to make sure it doesn’t count someone twice if they live somewhere else, like at college or in prison.

There are also other uses for the census. The information is used to determine how many U.S. Representatives each state has in Congress. If the population of California has increased since the last census, we may get more representatives to help the people of California and the local communities they represent. But if we are undercounted for the 2010 Census, we may lose a representative, according to the city’s census website (lacounts2010.org).

Businesses use census data to decide where to open new stores, which creates jobs and makes shopping more accessible. I live in South Central where there aren’t many stores. I always have to go far to get to a Gamestop, Ralphs or Best Buy to buy something of quality. Businesses also use the data to target their products to specific ethnicities or change the language to make it more understandable to their customers.

I believe that teens should encourage their families to fill out the census. I’m going to tell my mother the census is coming in March and explain how it can help the community and how confidential it is. If my parents are informed they’ll fill out the census and mail it in. It’s simple and doesn’t take much time. Those 10 minutes will have a long-lasting effect on your community.

People 18 years and older can apply for temporary jobs as census takers. Contact your local census office or call toll-free 1-866-861-2010. Census takers start at $17 an hour, according to the Census Bureau’s website. Go to 2010.census.gov for more information.


Other stories by this writer:

Taking on teen pregnancy. The play Ernesto, 17, was a part of taught him and his classmates about the consequences of sex. WITH sidebar about the effectivenesss of different forms of birth control. (October 2009) Music to soothe my soul. Because it’s full of emotion, Ernesto, 17, prefers classical music over everything else. (May – June 2009)

I’m a loner, but not lonely. I

t was worth the struggle for Ernesto, 16, to make friends, even though he still likes spending time alone. (September 2008)