Instead of a thick and juicy In-N-Out burger, I was stuck with dry crackers with cheese and homemade sandwiches. No fries—there were only dried fruit and nuts. And forget Coke or Dr. Pepper —we had stream water with iodine. Who would ever think of staying someplace like this?

I couldn’t complain. I was the one who wanted to spend two weeks of my summer on this wilderness adventure miles from the nearest fast-food restaurant. It all started when I saw a television show about a program called Outward Bound.

What at first looked like a wannabe Survivor turned out to be an exciting show. For two to three weeks, 10 teens backpacked through the jungles of Costa Rica, crawled through dark, bat-infested caves and fought roaring rapids down a long winding river. I was hooked. After watching it a few more times, I decided to visit the Outward Bound Web site and investigate how I could get involved. But after looking at the prices, which ranged $3,000 to $4,000, I decided to look elsewhere. I searched the Web many times before I came across the WILD (Wilderness Interactive Leadership Development) program at Mountain Meadow Ranch. Not only was this program cheaper (about $1,000) but it was closer to home and still included caving, hiking and rafting.

Now came the hard part—convincing my parents to let me go. "Dad, I’ve been working really hard in school and I deserve a reward" didn’t work because he thought this was too expensive. Although discouraged, I finally won both of them over with "but it will look good for college."

I couldn’t believe it, I actually convinced my parents to let me go! But what if I didn’t like it, or the other people weren’t nice? I began to worry—this would be my farthest and longest time away from home.

June 15 arrived and after a 45-minute flight and 2-hour drive, I finally arrived at Mountain Meadow Ranch. Colossal pine trees dotted the landscape where telephone poles would have stood on the streets of L.A. There was a large field with cows and horses. Log cabins were spread throughout the field and in the distant trees there was a ropes course.

Girls and boys had separate tents, each elevated on a wooden platform. I was relieved to see that there were indoor bathrooms, a privilege that wouldn’t be available later during our trip. I looked around at everything and thought, "Wow, I’m going to be living like this for two weeks."

Getting used to the new surroundings wasn’t the only adjustment I had to make. The two counselors, Caroline and "Dingo" were from Australia and had heavy accents. They were hard to understand, so at first we made them repeat everything.

Eight of the 10 campers were from the Boys and Girls Club of Reno and knew each other very well. It was a little lonely and awkward at first being the only person from L.A. But that changed the first evening. Racing against the sun, we made it up a mountain in our van just in time to watch the sunset. We had to get out and climb to the highest peak, though, so we all hoisted each other up the side of the mountain while cheering each other on.

When we returned to the campground it was pitch black and everyone was afraid to get out of the van. Using the light from the headlights and the thousands of stars, which can never be seen in Los Angeles, we scrambled to get lanterns and flashlights. Dingo and Caroline started a fire and everyone sat around late into the night eating roasted marshmallows and telling a little something about themselves. By then I got along with these people pretty well and we discussed our caving and camping trip.

The next morning we went swimming. But the other two girls and I didn’t have time to change before we had to leave to go caving, so we stayed in our bathing suits. I could feel the temperature dropping as we wound through the mountains, which were covered by thick clouds and snow. 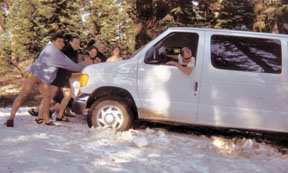 BRRRR Danielle and other campers had to push their van out of the snow in the sandals they had worn that morning.
Photo by Derrick Flakes

Suddenly, Dingo stopped in the middle of the road—it was blocked by snow! Everyone but me was yelling, "Floor it Dingo, we can make it!" I didn’t want to get stuck and end up pushing the van in the snow. Finally, he decided to take another route and we were on our way … well, not really. Snow blocked our path again and this time we chose to go through it. Bad idea. Our van got stuck and everyone had to push it free. The other girls and I, still in our bathing suits, also helped out and after about 30 minutes we nudged it free. My feet were all muddy and I was really cold, but it didn’t matter. I was having fun.

A couple hours later, we were back in 100-degree weather in this desert-like area with a big hole in the ground. This was the ice cave? The closer we got to the cave, the colder it became. There were chunks of ice on the ground and icicles were hanging from the ceiling. Some people slipped and I was one of the first. There weren’t any bats or creepy little insects; it was just a dark, cold, empty cave with ice. There was even a wall covered with ice. The last time I had seen ice like this was at the Culver City ice rink.

After the ice cave we rode on for about 15 minutes to our campsite. While Caroline warned us about bears, mountain lions and rattlesnakes, Dingo had this big grin on his face.

I thought to myself, "This guy is such a nature freak."

There were bugs everywhere and I didn’t want to get bitten. I zipped my sleeping bag all the way to the top—I didn’t care how hot I got, I wasn’t going to get bitten by any four-winged, vampire bugs from hell.

The next day we headed out to do some more caving at the Lava Beds National Monument. These caves were formed thousands of years ago by a huge lava flow from some of the nearby volcanoes, which are now inactive. This time everyone wore jeans and a sweater, a hard hat and volleyball pads! I felt like I was in the army when I was crawling through the small spaces—there were times I had to wiggle through a hole on my stomach and other times when I had to have people lift or pull me up a high mound. One girl started to cry because she was a little claustrophobic and everyone had to stop and try to convince her to keep going. There were little crystallized pieces of lava on the ceiling and we had to be careful not to let our backs rub against them, because they were really sharp.

When we got back to Mountain Meadow Ranch it felt like we had been gone forever. Our three-day backpacking trip started the next day and we had to start packing that evening. I had to pack the fewest clothes possible so my pack wouldn’t be too heavy. I’m 5 feet 2 and when I held my pack next to me, it came up to my waist.

It was freezing that morning. Once we started hiking the weight of my pack felt like carrying a dead body. We were advised to drink lots of water because we would be walking 13 miles. Halfway there, a small stream blocked our path. This stream was knee-deep and ice cold. While everyone was trying to figure out how to cross, Dingo threw his pack over and jumped across. Everyone was a little shaky about jumping since the bank was really muddy. I was really nervous.

"If you get nervous at the last minute, you’ll definitely fall in," yelled one of the guys. With that comforting tip, I took my pack off, backed up and ran at full speed. Although my feet got a little muddy, I cleared the water and was safe. 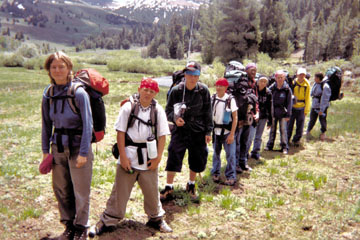 Danielle, fourth from right, undertook a major backpacking hike with the other youth in her program.
Photo by Matt

After crossing the river we hiked for several hours and it felt like my legs were gone. The air was getting thinner, and it felt like I was walking in a cloud of exhaust from a metro bus, but without the nasty smell. At one point we had to pass a big ledge on a cliff that was covered in snow. I was terrified. Although I was moving at a snail’s pace, I made it across safely by walking in Dingo’s pothole-shaped footprints.

After nearly two hours we made it to a frozen lake. Dingo told us we would set up camp and I thought, "Man, is he crazy? It’s freezing over here!" Everyone huddled around a fire in their sleeping bags, except for one crazy guy who decided to go fishing. I managed to get out of my sleeping bag and cook some dinner with a propane tank. I called it "mushroom slush," a hot and creamy mixture of mushrooms and herbs. It was the worst meal I had had. Dingo set up a tent, which was supposed to fit only two people, but eight of us crammed inside for warmth. That was the most uncomfortable sleep ever.

The next day we climbed Mt. Warren, a big mountain covered with lava rocks. When we got to the top we all wrote in a book that Dingo has his campers sign. I could see the border of Nevada and snowcapped peaks. As we headed back to the van some people ran out of water. Dingo made us get stream water and put iodine in to sterilize it. I hated the metal taste, so I added Gatorade powder.

After the backpacking trip, we went rafting for two days on the American River near San Francisco. I was excited because I had been rafting there last summer with EAOP (Early Academic Outreach Program). We started out in class 1 waters (the smallest rapids), and ended with class 3. We headed back to camp around sunset. There were a lot of mosquitoes and the guides put sticks in their hair saying "If we look like mosquitoes they won’t bite us." I guess it worked because there were hardly any bugs around that night.

The rafting trip was our last trip together. After living among trees, grass and blue skies, it would be hard going back to smoggy, congested L.A. All of the other campers lived in Reno and would see each other again. I didn’t want to leave them behind. On the last day, at 6:30 a.m., I said farewell to the other campers and loaded the bus that would take me to the airport. It was then that I got my last glance of the paradise that I had enjoyed for two weeks.