Nattalie took this picture of Johnny Depp waving to his fans after waiting seven hours outside the Chinese Theater to meet her hero. If you look closely, his publicist (the blonde woman behind him) is holding the letter Nattalie wrote to Johnny.
Photo by Nattalie Tehrani, 14, South HS (Torrance)

"Good morning America, it’s July 10th, and boy do we have some good songs lined up for you guys today. So stay tuned!" My alarm/radio woke me up at 6:30 a.m. and I groggily got up to turn it off. It was way too early to be up on a Sunday, but I was awake in a matter of seconds because today was the day I was going to meet my hero … Johnny Depp. Today was the premiere of Charlie and the Chocolate Factory in Hollywood, and my mom, sister and I were going to go to the Chinese Theater to sit there until Mr. Depp would hopefully arrive. I was in a rush to leave early because I figured we have to get a good spot up front, or else we would be stuck behind people. I ran to my closet to put on my clothes, shoved my dry toast down my throat—not even looking at what I was eating—and ran to wake up my mom and sister, and within 20 minutes we were on our way.

As we were driving there, for some reason I did not feel like I was actually going to meet him, it just seemed like it was too good to be true. I have looked up to him for years, ever since I saw Sleepy Hollow when I was 9. Why is Johnny Depp my hero? Well, he doesn’t care about what anyone thinks of him. He does his own thing, without second guessing himself. I love that he has such a cool personality, from the way he dresses with that rocker/grunge thing going on, to the way he talks, and how he always seems to be relaxed and kind. I love that you can tell that he is just a regular guy, who just happens to be amazingly good looking. His high cheekbones, tan skin and eyes you can get lost in for days are just another reason why I love him. He is such a versatile actor and with every role he plays he proves to his fans once again how talented he is. From Edward Scissorhands to Captain Jack Sparrow, and now his version of Willy Wonka, he can transform into any character. What I adore most about him though, is that he is very educated. I have learned so much from him because during interviews he mentions books that he reads and I get inspired so I go and read them. From Edgar Allen Poe to Allen Ginsberg and the book that inspired me in so many ways, On the Road by Jack Kerouac. He just motivates me to learn, read, explore and travel.

We got to the theater around 8 a.m. and there were maybe 50-100 people there. My mother dropped me off across the street from the theater where the other fans were sitting. I got out of the car and went and got a spot right up front. As I waited for my mom, I realized that I didn’t have a sign. How could I have forgotten? So once the stores opened, we bought poster paper and markers. On one side we wrote "Johnny Depp, we love you!" We drew little hearts and inside them we wrote all his characters’ names. It actually turned out to be quite cute.

We had lots of time to kill, so we stayed busy by reading Us Weekly and People, and watching the people in charge of the premieree set up the red carpet, which in this case was actually a brown carpet because it was supposed to smell like chocolate. Out of our extreme state of boredom in the fourth hour, we wrote "Honk for Johnny Depp" on the back of our sign and hung it over the side of the fence. People in cars surprisingly did as we wrote and honked, which got the crowd excited. As the hours and minutes ticked away the crowd grew larger and larger, about 300 people were there by 2 p.m. People were growing restless, they kept fidgeting and making loud sighs, and the anticipation was becoming greater and greater.

The stars were to show up at 2 and the premiere would start at 3. I kept going through my head how my meeting with Mr. Depp would go. What would I say? What would I do? Will I even remember how to speak? I kept asking question after question in my head. I knew one thing for sure, I had to give him a two-page letter I had written and the picture I drew of him, no matter what! Even if it meant jumping over the fence and having 100 cops jump on me. It was my only chance to tell him why I respect him, and how much I look up to him every day. Two o’clock rolled around, no Depp. Two-thirty, no sign of him. Celebrities like a very-pregnant Britney Spears and her husband, Kevin Federline, showed up. The director of the film Tim Burton, who the crowd went absolutely crazy for, showed up, then came Larry King, the cast of the movie, and even John Stamos and Bob Saget. As it grew closer and closer, more and more celebrities were arriving … but yet no sign of the man himself. Three o’clock came and my fear set in that maybe Johnny wouldn’t come. After all, he said he doesn’t like watching himself on screen, and he is busy filming both Pirates of the Caribbean 2 and 3, maybe he isn’t coming. 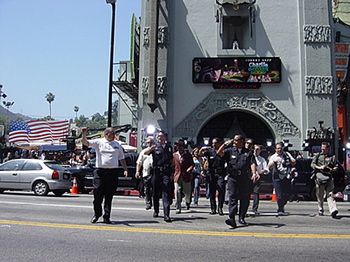 Johnny Depp crosses the street to meet his fans at the Charlie and the Chocolate Factory premiere.
Photo by Nattalie Tehrani, 14, South HS (Torrance)

As I was occupied thinking the worst and zoning out, I heard a piercing scream from the people in the crowd. People were screaming their heads off! In a matter of a second people were going insane. Pushing, crying, running bags and belongings over, by then we all had lost control. My mom tugged on my shirt saying, "Look, look, it’s him!" (sounding surprisingly star struck) My heart stopped. There he was, walking down the street very cool and relaxed, looking unbelievable as usual. He had on brown pants, a red and white striped shirt, a brown fedora, and his purple-tinted glasses that he always wears. He was surrounded by cops and I believe his publicist.

He was making his way across the street, not paying attention to traffic (a bus almost backed up into him) to get over to his fans, or at this point we were not fans, just a bunch of screaming animals. I was screaming, jumping, calling his name. I was so excited that I though my heart was going to stop. He started signing autographs, taking photos and shaking hands with everyone. I thought that maybe I should give the letter to his publicist before I lose it, so I gave it to my mom and she gave it to her. Then I thought, wait, he won’t even know who it’s from, so I asked her if I could give it to him myself.

He came closer and closer and finally he was 2 inches away from me. My sister asked him to sign our Entertainment Weekly with him on the cover and he did. He flashed her a smile, displaying all his gold teeth that he put on for Pirates. He walked up to me and I was about to die of excitement. The first thing I said was, "This is for you," as I handed him the letter and drawing. He looked at me with a big smile and replied, "Thank you so much."

I then asked, "Do you mind taking a picture with me?" "Sure," he said. I remembered that my mom had the camera, so I called out, "Mom! Mom!" She couldn’t hear me and there was no way of getting to her because the crowd had pushed her away to get to Johnny. Johnny was waiting, looking at me kind of wondering which way to look. "That way?" he asked. But too many fans were waiting to get their chance to talk to him so he got pulled away by his publicist before I could reply. After that I’m not too sure what happened. All I know is that I had just met my hero, and my life was absolutely, 100 percent complete.

It was the greatest day, even though I didn’t get to take a picture with him. Still, I couldn’t have imagined it going any better! I thank Johnny Depp for being the coolest guy on the planet, for being so nice and taking the time to meet all his fans, one by one. For all those people out there who are dying to meet their heroes, don’t worry, your time will come. And when it does … do yourself a favor, keep the camera close to you at all times so you can capture that amazing moment that you will cherish forever. Or in other words, don’t give your camera to your mom.