What am I doing here? It’s 9 a.m. on a Saturday. I’m staring at a chalkboard, there’s a thick study packet on my desk and about 20 students sitting quietly around me. Why am I not in bed? Oh that’s right. I decided to go to an SAT workshop at UCLA.

As long as I’ve been going to school, my mom has constantly told me to get good grades and study hard to go to college. So I’ve always gotten straight As in high school and I want to go to a good college. But I know good grades aren’t the only thing I need to get me there. Colleges also look at SAT scores.

I went to this workshop at UCLA because I am a horrible test taker. My brain can be loaded with equations and vocabulary, but once the teacher hands a test to me, I go blank. I wanted to avoid that anxiety the day I took the SAT. So I felt like I was taking a smart step by trying to prevent any panic during the test.

When I arrived on campus at UCLA I noticed how the perfectly green grass complemented the red-brick buildings. I couldn’t stop staring. It wasn’t every day I visited a university.

All the students attending the workshop were assigned a classroom with about 20 other students. Luckily my friends and I were together. I would have felt uneasy around a bunch of kids I didn’t know. Before the class got started my friends and I were being loud but the other students’ facial expressions seemed to say, “I’m here to learn. This is my future. Do not disturb.” I thought they needed to lighten up.

I felt confident as the instructor handed out an SAT packet. But as I skimmed the math section I thought, “What is this?” I didn’t know how to do any of the problems. I wasn’t too worried, though, because it was the instructor’s job to help us. But then the instructor went over the questions quickly as if it were review. I felt lost. I didn’t raise my hand to ask for help because everyone around me was nodding their heads that they understood.

I felt behind compared to the kids of other races 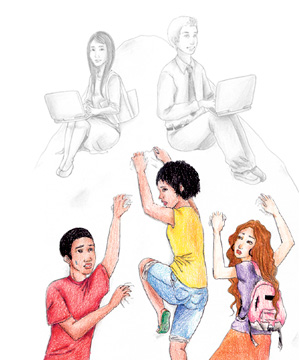 In this moment of insecurity, I couldn’t help but notice that this class had a more diverse group of students than my school. Behind me sat two white girls, and going further back I noticed African-Americans, Latinos and Asians. Where I live in Sylmar the population is mostly Latino. Since I was the only one who didn’t seem to get what the teacher was saying, I felt like I was fulfilling the stereotype that Mexicans can’t do well in school.

Our principal, Mr. Navarro, constantly says, “My generation messed up … and now it’s up to you guys to fix it and be the next leaders of this world.” Knowing that the world rests upon my shoulders is scary, especially because I felt lost taking an SAT prep class.

I didn’t want anyone in the class to know I was falling behind. I wanted to prove to these kids that I was just as smart as them. And I really wanted to prove to myself that my ethnicity wouldn’t prevent me from doing well in school.

As we moved to the English section it was more noticeable that there was a difference between the other students and me. We were supposed to choose a word to complete a sentence. As a tip, the teacher told us to think of a word that would fit into the sentence that wasn’t among the choices. She said once we did that we could figure out which of the answer choices was a synonym for that word. I couldn’t even pronounce the sophisticated words we had to choose from, but the girls behind me used other words that were just as perplexing as the answer choices.

I thought I had a great vocabulary, but I had never heard words like “spurious,” “cogent” and “plaudits.” It’s disappointing that the schools I’ve been to didn’t give me as good an education as these kids. Usually I’m proud of getting some of the best grades in my classes, but I was jealous of what these students knew.

I realized that these kids probably grew up with parents who spoke English and used impressive-sounding words. But having Spanish-speaking parents, I learned most of my grammar and vocabulary on my own. I’ve never been ashamed of having parents who weren’t born here or didn’t graduate high school but sometimes I wish they were more educated so they could help me in school.

When we started reading passages out loud the students who volunteered didn’t mispronounce anything. There are only a few students in my classes who read like these kids. They reminded me of my teachers.

I half-assed the rest of the workshop. I copied the math solutions the instructor wrote on the board without trying to understand. I felt like everyone else was ahead of me and I wasn’t being graded, so what was the point in trying?

During our break a few of my friends brought up how they felt like they weren’t up to the same academic level as the other students. Hallelujah! It wasn’t just me who felt intimidated.

“Dude, did you hear those girls read?” my friend Jocelyn asked. “Ha, all legit!! They’re so ahead. We’re all behind right now!”

Before this it had never crossed my mind that we were behind. Most of us attending the workshop came from L.A. Unified. The idea that we are not all learning the same curriculum wouldn’t leave my mind after that day. I had never thought that my school was doing a bad job teaching us but this experience raised some doubts. The next day instead of feeling proud that I was one of those high-achievers who went to a Saturday SAT prep class to get the extra help I need, I felt dumb.

Coming back to school that Monday was a relief. I was in my usual environment with the teachers I know and the faces I recognize.

We told our teacher how insecure we felt

My high school is divided into four small academies. In my academy, Social Justice Humanitas, some of us are in an advisory class designed to prepare us for college and help us grow as independent thinkers. Our teacher Mr. Olivares, who has us call him by his first name, Pablo, always starts his Monday classes by asking about our weekends. My friends blurted out how stupid we felt at the workshop.

Pablo was concerned because he didn’t expect complaints from us. We are his class of mentors; we’re the role models who help other students with their work. He asked why we had such a rough experience. Pablo remained quiet while my classmates explained that the two white girls read so perfectly and how everyone else’s vocabulary and grammar was strong and how no one else was freaking out about the math questions.

Then he said, “Oh really? Wow, so the workshop just killed you guys, huh? Did it completely destroy your hopes for the SATs? Ha ha ha.” Pablo likes to add sarcasm to lighten the mood. This time however, his comments didn’t make us laugh. We were anxious to know his actual response.

He asked us if we thought that feeling behind had to do with where we live, how we grew up, or what school we go to. I had already known that Sylmar isn’t fancy like Beverly Hills, but until Pablo mentioned it I never thought about how where I live affected my education.

He explained how it was reasonable that we felt lost that day. Most of our parents, he pointed out, can’t help us with school because they didn’t finish high school or don’t speak English. Or they have to work all day to put food on the table. He was right. My parents stopped helping me with homework around fourth grade. I remember my mom stroking my shoulder, telling me how she wished she could help me.

Pablo asked how many of us don’t get help at home because our parents aren’t able to. As most hands rose, people saw how we’re all in the same place.

“Most of those kids will have it easier than you guys because their parents are able to provide them with what they need,” he said.

“Wouldn’t it be better to know that you put in a strong effort to get to that dream college?” he continued. “That you made it work because you were determined and you understood everything you learned in school and you didn’t just wing it?”

“THAT’S RIGHT, Ha ha!” one of my classmates stood up and yelled out.

This February, a few months after the SAT class, a three-day trip to visit colleges helped reassure me about my future. We went to UC Irvine, UC San Diego and San Diego State. The best part of our visits was talking to former Social Justice Humanitas students who now attend those colleges. These students shared how they also worried about not having enough money to pay for college, not being smart enough to get in or their parents not even wanting them to go.

But then they explained how they made it through. They told us about scholarships and how we shouldn’t be afraid to take out student loans because we would earn enough to pay them back. They also told us about how in high school they took extra classes at community colleges, performed lots of community service and joined clubs to show colleges that they were well rounded. Some of my classmates were so inspired that they cried listening to the stories from these students who came from the same school we came from.

I understand that while my school may not have the variety of clubs and electives that other schools have (I’d love a debate club and a journalism class), my classmates and I can overcome this disadvantage. It wasn’t like the idea of Latinos and African-Americans not doing as well on standardized tests or going to college in lower numbers started at the workshop. It’s been going on since before we were born. But African-Americans and Latinos have also been succeeding since before I was born. As minorities, that should be the norm. My parents work hard so my sister and I don’t have to be a seamstress or a delivery driver like they are and I understand that it’s my responsibility to try my hardest to be successful.

Going to that SAT workshop was a wake-up call. It showed me that my classmates and I don’t have the same advantages and opportunities as students from wealthier neighborhoods or who have parents who speak English as a first language. But rather than get discouraged, I feel motivated to overcome those challenges. Even though everyone should be given equal resources and opportunities, I know we can make it if we are determined to work our hardest.

Click to read an interview with an admissions officer from UCLA who explains how colleges choose who gets in.