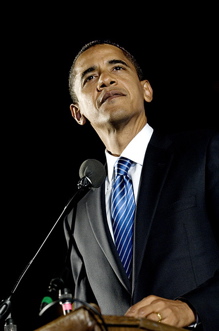 Photo courtesy of Obama for America


I was restless as I stared at the TV. I couldn’t help but think about what would happen if Barack Hussein Obama didn’t win. As the time passed I became so nervous I began biting my nails and clicking my pen over and over. I did not want to start to think about a potential winner (even though it was clear that Obama had more votes) because I felt it might jinx Obama’s chances of winning. Yes I know it sounds silly but that’s how much this election meant to me. Obama becoming president means change and I believe he will lead American in the right direction, starting with bringing our troops home from Iraq and more importantly getting America out of this economic crisis. As a junior in high school one of the things I’m concerned about is the cost of education. In one of his past speeches, I remember him saying how he would help students get more financial aid and that education was one of the things he would work most on. Obama’s speeches helped me believe that he would change America for the better. As we at L.A. Youth sat around watching ABC news I became filled with anticipation and began to have doubts as John McCain’s electoral votes grew slowly. At exactly 8 p.m. my heart skipped a beat as Obama was announced as the 44th president of the United States of America. Obama, a president for change. Yes!
Stefany Macario, 16, King Drew Medical Magnet HS

Will people be angry?

The results on the television seemed clear enough, but how I felt was far more complicated. I am a Democrat, so of course I was rooting for Obama. However, my positive reaction was dimmed by other thoughts—the results were close, though not as close as the last election. I’m glad that Obama won, but not everyone feels that way. Almost half of the country won’t be thrilled by this result. We know that many Republicans are really upset, and will feel cheated by the outcome. This isn’t a happily-ever-after situation. The novelty of a black president, the novelty of a Democrat…this territory is unfamiliar. I’m excited about the changes that will be made in America, but at the same time, the worry about the unknown and the fear of others’ anger puts a damper on the situation.
Fiona Hansen, 16, Marlborough School

I was watching history being made

I’ve supported Barack Obama from the beginning. I remember watching him announce his candidacy for president two years ago. I felt inspired to care about politics and the future of our country. It also made me realize that this would be the last presidential election that I would not vote in and I wanted to know about the people I could re-elect in four years. As I followed the primaries, I was worried that he would lose to Hillary Clinton. But as he became the Democratic Party’s nominee, I was excited for the possibility of a huge change in American history occurring during my lifetime: an African American becoming president of a powerful, predominantly white nation. And finally, watching the election coverage and watching Obama take key states, I was overwhelmed by that sense of history and a feeling of this country moving forward. I’m so excited for the prospect of a change in our government (mostly a change from the current administration and having our country not be hated through out this world) and Barack Obama leading our country to a better, more environmentally and humanly conscious, place in this world.
Sam Landsberg, 15, Hamilton HS

Faith in the future

As I sat watching the election results come in, my stomach was filled with an overwhelming sense of nervousness. I was watching ABC, when at 8:03 p.m. the new president was announced. As many had anticipated, Sen. Barack Obama became the new president of the United States. I jumped for joy and did my famous victory dance. Since Obama won, we can expect major changes to our country. I am absolutely ecstatic that Obama won because his proposals including increasing financial aid and getting us out of the war quickly, help Americans (including me) have hope for the future. Since 2000 we have suffered through George Bush’s troubled presidency, now that Obama is our new president, there is a new faith that America can recover from our current economical, environmental and racially divided situations.
Stacey Avnes, 14,  Sherman Oaks Center for Enriched Studies

In the beginning, I didn’t think he would get this far. But going into Election Day I was sure that Barack Obama was going crush John McCain. I was astonished by the lead Obama had in the polls. Everyone I knew, even if they were for McCain, would say Obama was going to win. Surprisingly the two candidates came a lot closer than I would imagine. I did not think it was possible for John McCain to get as many votes has he did. When I heard the ABC announcer tell America that Barack Obama was our new leader, I did not have to worry anymore. I felt like it was over. I felt relieved. I finally knew that that the country’s future was in great hands. From now on, I would no longer worry about John McCain becoming another George Bush.
Taila Proctor-Jackson, 13, Village Christian MS (Sun Valley)

Barack Obama’s victory will prove to be a change for the better for America. His presidency will not only unite this nation, but will also end the war between our country and Iraq and the troops will get pulled out. President Obama has the capability and intelligence to resolve the problems and federal debt left by George Bush. The election of an African-American president has also given me a sense of hope that people are becoming more open and less prejudiced. I hope he’ll help with giving every person equal opportunity. I think his main goal will be to have everybody be treated fairly and the way they deserve. That is what gives people hope.
John Lisowski, 16, Laurel Springs

I was excited to see a minority win 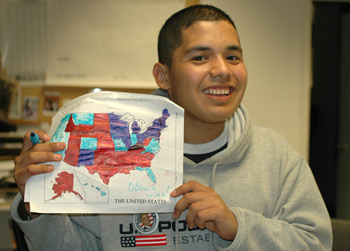 
On Nov. 4, 2008, my pride and faith in the United States was reborn as Barack Hussein Obama won the presidency. Dreams of Americans, including mine, of seeing a minority running for and winning the presidency of the United States became a reality. This victory is not only for Democrats or even the United States. It is a proud and historical victory for everyone in the world. As Obama proved, you don’t need to be white, come from a rich family or be a war hero to be a presidential candidate. All you need to be is an American willing to step up to the plate and be a leader.
Aaron Sayago, 17, Fairfax HS
A disappointed Republican

I was disappointed when the election was called for Barack Obama even though I knew it was coming. I was still hopeful for John McCain. Many people ask me why I am a Republican. My answer is simple. Taxes. I just don’t want my family to pay more taxes. Also, despite what many Americans believe, there is no way Obama is going to bring the troops back home right away. It is hard to end any war and this one is especially complicated. But I commend Obama for mobilizing supporters with a perfect campaign. McCain had no chance against Obama ever since Sarah Palin’s stupidity was revealed to the public. President Obama will do his best for the benefit of the nation.
Elis Lee, 16, Crescenta Valley HS

We must work together now

As the polls closed and the votes rolled in, because my own vote went to Barack Obama, I cheered along. But I was concerned with one thing. Obama’s campaign stressed unity; it is a plan that involves everyone working together to grow our nation from the bottom up. McCain’s plan focused on the individual, with lower taxes and self-interest motivating the country. So what is the problem? Obama’s way requires every person to work together for the larger sake of our entire country. He encourages people to volunteer and wants to help people with issues such as college and healthcare. It is a plan that literally runs on hope. If we continue to be divided based on our political ideas, we will all fail. On the other hand, if Obama can unite America as he has the Democratic Party, everyone wins. As for me, I am hopeful. I’m excited to do my part by helping other people, then in the future having a job and paying taxes. I believe in Obama’s theory and I trust that the United States will live up to the “United” part of its name.
Alexander Gleckman, 18, South Pasadena HS

I felt joy when I heard Barack Obama’s name called as the 44th President of the United States. Obama means change for me because he cares about the cost of higher education. The next four years will be a test for him to see if he can make sure that costs don’t keep increasing each year. College is the most important thing on my mind because in just nine months I will be heading to college.
I was also in favor of Obama not because of his race but because of his composure, especially when McCain attacked him during the campaign. I think it is very important that a president has leadership skills and composure because other countries will challenge him. He has to work with these countries and handle criticism so that he can lead our nation. We will see if Obama will grant America’s and my wishes of change over the next four years.
Aaron Siegal-Eisman, 17, Los Angeles Center for Enriched Studies

Who will be in his cabinet?

In the beginning, I was an enthusiastic supporter of Sen. Hillary Clinton. However, Sen. Barack Obama’s message of unity and his maturity throughout the campaign convinced me that he is the candidate for America.
Now that Obama has been elected, it’s time for him to fulfill his promise to Americans. His message of hope, change and unity should be reflected in his choice of a cabinet that brings both Republicans and Democrats together.
I am excited for my future and America. I understand that Obama’s victory doesn’t guarantee a successful presidency, but I believe that Obama will be able to carry the inspiration Americans experienced throughout his campaign into office. I believe Obama’s patience and ability to consider all angles of an issue will make him successful.
Se Kim, 17, Pacifica Christian HS (Santa Monica)