A swear jar is a creative way to raise money 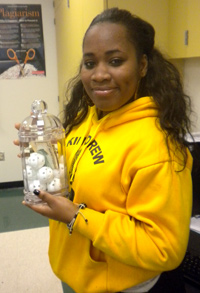 
My school has taken a creative approach to raising money for a Haiti relief fund. In my history class, Mr. Wood set up a swear jar that he keeps on one of his desks. If you say any put downs or curse words, you need to put 25 cents in the jar. I had to put 25 cents in the jar too. My teacher was joking to the class about how hot he was and I said "ugh." He didn’t take it seriously but everyone in the class was taunting me saying, "No putdowns! No putdowns! Twenty-five cents, Ashley!" so I could put money in the jar. But I didn’t mind since it was for a good cause. I think it’s an effective way to raise money because we stop saying negative things and all the money goes to Haiti. One day we raised about $30 with the help of some donations. The money will be donated to the Red Cross.