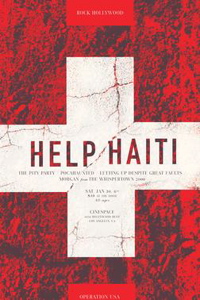 Jason Lester and Aron Chilewich, two seniors at Viewpoint School in Calabasas, took a different approach to raising money for Haiti. When the disaster struck in Haiti, a teacher that used to work at Viewpoint School contacted Jason and Aron, asking them if they’d like to organize a benefit concert for Haiti. Both Jason and Aron have been known throughout Viewpoint as music junkies. They both have knowledge of the music and concert world, considering they go to so many concerts in the Los Angeles area.

They agreed and immediately started coming up with ideas. “Our ideas ranged to everything from having it in a backyard to having a full weekend festival,” Aron said.

“We basically tried to contact every band we knew in the Los Angeles area,” Aron said. After sending out hundreds of e-mails, Jason and Aron were able to put together a four-act lineup for the benefit concert. Jason and Aron started to contact some venues, but they had to find something within their budget. Finally, Cinespace offered to book them for four hours for the charge of just one.

When asked how they think the disaster in Haiti has affected us locally, Lester explains that he has “always been interested in Haitian culture” and though they don’t have a specific goal in terms of how much money they will raise, they both agree that “it feels good to just raise something.” The bands have donated their time for the concert and all profits made from selling tickets and posters will go to Operation USA.

Jason and Aron said they chose Operation USA because it is “more personable and efficient” than other, more well-known and larger charities such as the American Red Cross and Oxfam. Richard Walden, the founder and CEO of Operation USA will be speaking at the concert.

The “Rock Hollywood. Help Haiti.” Benefit
6 to 10 p.m. Saturday, Jan. 30
Cinespace Hollywood
6356 Hollywood Blvd.
$10 entry fee per person (There will also be a donation box inside)
Validated parking will be available in the parking garage at the Arclight.