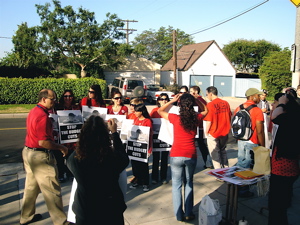 
Nearly 50 teachers walked out of Los Angeles Center for Enriched Studies at approximately 7:45 a.m. Friday to protest the governor’s recent decision to cut school funds. Seventy parents, students and other staff members also came out in support of the hour-long walk-out, wearing red shirts and signs that hung around their necks.

Teachers, parents and students were passionate about the cause. “I’m out here not just for me, not just for the teachers, not just for the kids … We’re saying ‘no’ to the decision to beat up on the little guy. Enough is enough,” said Glendar Haskin, a chemistry teacher at LACES. She said she believed that walking out was the best option she had to express her disapproval of the budget cuts.

Officials of the Los Angeles Unified School District have said that the governor’s proposed budget would deprive the school district of more than $350 million and force the district to cut programs.

Some teachers like Randy Rutschman and Ray Robinson were dissatisfied with the timing of the walk-out, and thought that it would have been much more effective if it were held earlier in the school year. Robinson also speculated that the effectiveness of this walk-out would largely depend on the media coverage. “I’m heartened that we have parents and students here today. But unless it’s seen in the media … what’s it gonna achieve?”

Nonetheless, the two teachers joined the majority of the LACES staff and walked down 18th street to protest the budget cuts. “I’m not sure it’s the right action at the right time, but I have to support the union,” said Rutschman wearing his red United Teachers Los Angeles T-shirt. The crowd walked toward La Cienega Boulevard, and it was difficult at one point to conduct interviews because of the number of drivers honking to show their support.

Parents played a major role in the walk-out, volunteering on and off the school campus to ensure the safety of all students. They brought donuts and coffee for the teachers, and the school’s Leadership (student government) class prepared a light brunch for teachers returning to their classrooms. Many parents were walking alongside the teachers, and encouraged students to join them.

“I said to my kids, ‘Come walk with me, or never complain to me that classes are too big, or that your favorite teachers are getting the pink slip,’” said Maggie Scott, a parent of a 10th grader.

Another parent, Deirdre Higgins-Weitz, expressed her annoyance with the governor’s decision to compromise school funding to make up for the state deficit: “The governor’s kids go to private schools. He doesn’t understand what it’s like to have a child in a public school.”

Due to the encouragement of the parents, many students like Carmen Johns, a 10th grader, seemed especially enthusiastic about supporting the teachers. “We keep using the schools as the scapegoat. I’m so glad it’s a good turnout,” Johns said. When asked if her peers were also interested in what was happening that morning, she said, “They’re leaving it to the teachers … they should stop being blissfully ignorant.” 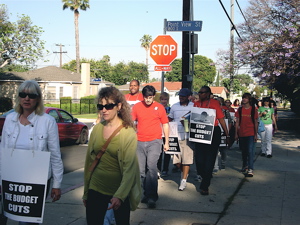 Students were allowed to participate in the walk-out, as long as they were accompanied by a parent, and were allowed back into school at the start of first period with an excused tardy slip. All students who were not part of the walk-out were assembled in the soccer field for an extended homeroom period, where they waited for the teachers to return. Meanwhile, several students attempted to get students to walk the perimeter of the soccer field in a show of support and were able to attract almost 20 students. Most other students, however, did not seem to know in advance that there would be a walk-out that morning, but were supportive of the cause once they were asked about their thoughts on the protest.

“Students tend to respond when things actually hit their reality. They haven’t even announced what they’re cutting; when they do that, it’ll become more of their reality,” noted Victoria Vickers, the magnet coordinator.

Although they did not participate in the walk-out, school administrators displayed a positive attitude toward the teachers. “I’m in sympathy with the teachers,” said Michael Hammond, the assistant principal. There were, however, teachers who decided not to participate for personal reasons and instead remained on the soccer field to supervise the students.

After the teachers returned to their classrooms, Principal Margaret Kim made a PA announcement thanking everyone for their cooperation and classes continued as they would on a normal day. She ordered pizza for the non-teaching staff to thank them for their help, ending the day on a positive note.