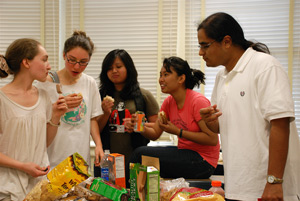 
The leftover, a food feared by some, can become the most coveted lunch … if you have a microwave. Microwaves magically make foods that would taste disgusting cold (lasagna or rice and beans) delicious in their piping hot goodness. Since sophomore year, my friends and I have eaten lunch in a teacher’s classroom for this reason. That microwave opened up new possibilities for lunch: we were no longer confined to sandwiches five times a week.

On one particularly bad day sophomore year I had the king of leftovers: falafel and hummus. Unfortunately, I had it for about three seconds before my friends stared me down, literally pointed at their hungry bellies and promised that this time would be the last time they asked for part of my lunch. Once again, tired of the whining and feeling tag-teamed, I handed over most of my food.

After months of having lazy friends steal our food, my friend Mari and I decided that we would try to stop all the lunch stealers whose nibbles would progress to bites and whose bites would progress to missing plates of food. It had now become a long-running joke—the kids who shirked the disgusting cafeteria food or decided to do homework in the morning rather than pack a lunch, were the ones with the full bellies, while we, the people who brought our lunches, were stuck staring at empty Tupperware containers.

We had to stop the moochers

Mari and I resolved to protect our leftovers, Trader Joe’s salads and microwave burritos from the vultures, while also guaranteeing that, for at least one day, our seemingly starving friends could have a decent meal. Our potluck was born.

That first Friday, one person was assigned the snack, another drinks until we were making up courses so all eight of us were included. As I prepared the apples and washed the berries for my fruit salad, I worried that our idea would fall flat on its little foodie face. I feared that when my friends forgot to bring their courses (which I saw as inevitable), I would be forced to become yet another moocher, reduced to begging for food. Despite my worries, it went smoother than I imagined. As expected, the moochers didn’t bring enough food the first time: there weren’t enough pizza bagels to go around because Joana had brought only one box and we had to share our cookies because Andy brought only six. However, they promised to bring double what they had the next time, and gave up their food to us for the first time. The weekly potluck began. We named it Food Society.

At first people brought things that were easy to make, like my fruit salad. But the full-sized fridge we used in Mr. Chase’s room was soon packed with elaborately decorated cakes from Porto’s, Armenian pizza, Filipino desserts no one could pronounce and Italian food. We started taking orders, because one friend’s dad was a chef at a restaurant, and we began demanding certain foods from certain people. Joana’s mom’s crazy garlic pasta and my mom’s signature pesto sandwiches were common requests. But ethnic foods were popular too, because we didn’t have the ingredients or know-how to make them at home: hummus and pita and falafels, tamales and enchiladas, spaghetti, and everyone’s favorite, the halo-halo drink from Rose’s mom (a mixture of seemingly every single thing found in a Filipino grocery store, from plantains to red beans, in a cup with ice cream. Trust me, it’s delicious.) As we got more excited about Food Society, we began branching out. Out of some of the Tupperware containers came home-made wontons and spring rolls, peanut butter cookies with the authentic criss-cross fork design and even baklava (a Greek pastry). All the different food made lunch a happy experience, not one where we had to be protective of our food.

Our own cooking developed later, and was made better by the cooking class my friend Rose and I took during intersession. Nelson’s pho (Vietnamese beef and noodle soup) was an amazing accomplishment, especially from a boy who had previously made only cereal. I usually made desserts because I love to bake. One flourless chocolate cake that I slaved over for hours—beating the egg whites, slowly measuring the messy melted chocolate— ended up a lumpy, dry heap, and left a weird scrambled eggs aftertaste. The center’s sad, sunken-in hole only justified my friends’ disgusted faces. As I served my chocolate disaster to my friends, their gagging sounds and faked deaths didn’t deter me from future baking endeavors.

Food Society posed one big problem—where to put the food. None of us had any classes near Mr. Chase’s room, where the fridge and microwave waited for us, so we managed by storing the food in other teachers’ classrooms and lockers.

We stuffed our food into one locker

However, we suffered some casualties. Six of us shared a “miracle locker” that normally held 15 notebooks precariously balanced on top of textbooks and the occasional sweater. This already crowded locker was a hazard on Food Society days: animal crackers were shoved into every available cranny, Tupperware was wedged between history and chemistry books, and the last person to reach the locker would shove their books in and slam the door hoping nothing tumbled out.

Surprisingly, it wasn’t until second semester that a container fell, smashed on the floor and spit its crumbly Filipino pastry all over the first-floor hallway. After that unfortunate event, and glaring looks from the janitor, we always made sure someone stood behind the locker door to catch anything that attempted escape.

Our rules were always evolving, despite the fact that a majority of them were unspoken: you have to carry around the drink, because it gets hot in the stuffy locker and takes up too much room; you cannot have the same duty twice in a row, you cannot eat if you forgot to bring food, and you cannot offer Food Society food to outsiders. With our food assignments rotating, it would get too complicated to incorporate other people. Plus, after we had gloated for so long about Food Society’s success, it seemed wrong to allow the people we taunted with our food to join.

Food Society evolved with the advancing recipes and rules. Junior year we abandoned the classroom for outdoor benches and our group changed so there were new faces and dishes. We needed to maintain our eight-course norm (we were spoiled). We lost Danny, who graduated and always brought the most amazing Italian food, but we gained Kristelle who would always bring something from the Thai restaurant down the street from her house. 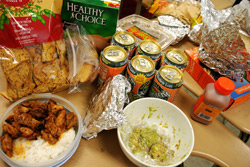 Every so often I came across a dish I found just plain gross, like borscht, a Russian soup Mari brought. We were all equally disgusted, but pretended to like the heavy, beet-filled fish stew. Our winces and constant reminders of the better foods she had brought (anything else), ensured we’d never have to pretend to like Mari’s borscht again. The good thing about Food Society is that we have so much food, if someone doesn’t like one thing he or she can always find something else to eat. So even with the Borscht-incident, we were still able to fill our bellies with Pocky stick snacks (pencil-like cookie sticks that you dip in chocolate or strawberry frosting) and chicken salad sandwiches.

There were dietary challenges, too. This year my friend Rose decided to become what we called a bird-itarian, so the only meats she eats are chicken and turkey, and my friend Charity hates cumin, and Joana will not eat red peppers. But, in the end, each of us could usually make food that everyone liked or bring a different, maybe even lesser, food like a grilled cheese sandwich (which heated up fine in the microwave) for the picky eater.

Dessert could be especially tough, because I decided to go on a chocolate fast for five months last year, so whoever made dessert would joke that they would bring a chocolate cake because they knew my weaknesses. But in the end, I got Gummi bears and everyone else teased me with their Milano cookies. These simple moments bonded us. During one Food Society, Danny, who brought the main dish, forgot to bring plates. To make matters worse, it was raining. We all sat on the hallway floor around the container and dug in. Ravioli with tomato sauce is not something you can eat easily with fingers but we made it work. It was very messy and really, really funny. When we went to our fifth period, our hands and faces, even our clothes, were covered in marinara sauce. After that, no one forgot plates.

Next month my friends and I are graduating. When we scatter to different colleges this fall we will all miss the smorgasbord of foods from our Friday celebrations. However, I know I won’t miss that bloated feeling from being full during fifth period.


Other stories by this writer …

Facing the future. With all these important decisions to make about college, 16-year-old Alana is not sure she’s ready. (October 2007)