Since sixth grade I’ve been a class clown, one of those "especially kids," the one the teacher always singles out by saying "OK kids, everyone sit down, shut up and don’t say a word…especially you Eamon!" I was the kid in the back, joking and screwing around. The one who grabbed attention during recess and lunch, but became just another C student in class.

I spent three years at John Adams Middle School and was planning to continue on to Santa Monica High School along with all of my friends. But because my grades never seemed to improve in public school, my parents decided to ship me to New Roads, a school with "liberal views" and an "eccentric curriculum," or in other words, a private school. It was a place I thought I’d never fit in.

On the first day of ninth grade, I looked around my new school and saw people I had only heard about. Rich girls covered in Louis Vuitton logos, talking about "how fat so-and-so is." Rich boys filling the parking lot with Jaguars and Audis. I felt out of place. But what surprised me most was that there were kids who weren’t like this. Black, white and Latino kids from public schools diversified the parking lots with Chevy pick-ups and Fords. I felt comfortable with kids coming from the same background as me. We could share jokes about the other students who fit the stereotype of rich and spoiled. I never thought I’d be at a private school sitting around the lunch tables, joking with other students about the kid wearing $200 sunglasses.

By 10th grade, I was 16, well-liked, but still feeling lost about who I was. I still didn’t know what I wanted to be, or where I wanted to go. The year started and we had to choose new elective classes. One of them was "Stand-Up Comedy." The class didn’t really spark my interest, but my friends kept telling me I should try it. "You definitely won’t fail that class," they told me.

Being funny is easy, doing comedy is hard 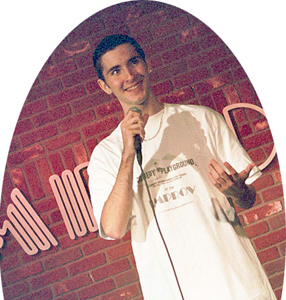 Eamon got laughs at the Hollywood Improv on Oct. 24, his third performance at the club, through the Comedy Playground program.
Photos by Managing Editor Libby Hartigan

Stand-Up class met once a week, for 40 minutes. On the first day our teacher, Susanna Spies, told the class that by the end of the semester, she expected us to perform at the famous Hollywood Improv. Wait a minute—performance?! This was supposed to be the class where I could screw around. This was going to be my easy A, right? It looked like I was very wrong. Next, Susanna told us to write down five things we love and five things we hate, and then read the list to the class. None of us understood how this exercise was going to help us make a set (at least four minutes of performance material).

"Um, does Chris Rock make his comedy this way?" one of us asked.

Nevertheless, we cooperated and began writing. The first student read his list in a monotone voice, "I love baseball, I hate algebra."

"Why? Why do you hate that?" Susanna interrupted. "I want you to rant about that."

At first seeming very apprehensive, he ended up ranting and raving about each topic.

And it was hilarious. We all began cracking up and sharing our own opinions about each topic.

"Yeah, I hate P.E.! Our P.E. teacher is fatter than any other teacher! How am I supposed to believe her when she tells me to work out?" another student said.

I realized our lists were so funny because they were honest. Watching someone express what drives them crazy, or keeps them sane, is what comedy is all about. However, I still didn’t know how I could make a five-minute set on "why I hate Speedos."

The more I progressed, the more I knew this was the class for me. It blew my mind that I could get credit for something I never thought was a talent. Stories and jokes about my teachers, Michael Jackson or talking to girls—things that normally would never leave the school benches and basketball courts—were building into a true passion.

One thing I learned about comedy was that you must have an opinion on any topic you talk about. Every day, I would practice outside of class by imitating librarians, liquor storeowners, anyone around me. One person in particular was the #8 bus driver in Santa Monica, who called out street names like a preacher, "Lord we have entered into Pico! Almighty it’s 24th Street!" I would perform characters like this in class and they would always get a good reaction. But for stand-up you need a set. Since these characters didn’t have any substance or story to them, they never became part of a set.

Would my jokes fall flat?

As I counted down the weeks to the Improv performance, I became more and more nervous about my set. I was writing about homework and curfew, because I thought that’s what a teenager should be talking about. But these weren’t working for me. I was writing jokes I couldn’t put my heart into. About two months before our performance, I went to Susanna for help with my material. She sat me down and asked, "What do you really want to talk about?" It surprised me that she really wanted to hear what a teenager had to say. She told me that whatever I write about, there should be emotion behind it. I realized I was censoring myself, which made anything I wrote not very funny. The school system works so hard to make all students the same, so I never expected a teacher to embrace the "especially kid" qualities in me.

During the next week, I started working on a set about having a sexual experience with an ex-girlfriend, with all the awkwardness and excitement included. I worked harder on Stand-Up than any other class. I practiced everywhere, from talking out loud at the bus stop, to filling my chemistry textbook with jokes and ideas. I would excuse myself from class and bring my books to practice in the school bathroom with a #2 pencil for a microphone, and a trashed urinal as an audience. The only problem with the bathroom is that whenever someone walks in you have to pretend you’re washing your hands or something. I didn’t really care if New Roads had a problem with the subject of my material. "It’s their problem if they don’t want honesty," I thought. The one person I did care about offending was my ex-girlfriend. So I asked for her permission, and wrote my set in a general way rather than specific: "Girls do this…" rather than "This girl did that…" 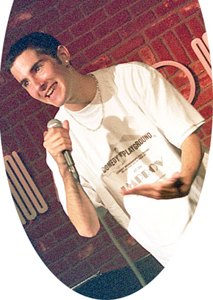 On February 18, 2003, our class performed. The Improv was humid and busy, with the chatter of about 50 New Roads teachers, students, family members and drunk strangers who filled up the chairs. As more people came in, the anxiety started to hit all of us. "What if no one laughs?" "What if I forget my set?" "What if I throw up all over the front row?"

Finally the lights dimmed and our first performer, Kip, was introduced. I felt relieved when I saw how supportive the audience was being for him. He rolled right into his set, and the crowd enjoyed it the whole way through. I was so proud and so nervous for my classmates. Here they were going up, and trying something with no one to blame but themselves if they failed. But it was working! The crowd was laughing; they were actually enjoying it. Even though my classmates came off stage shaking, and saying that was "scary as hell," I saw how good they all felt from making people laugh.

Our one-hour show was winding down. I was the last one to perform, and my time finally came. Susanna called me up to the stage, and it felt like everything went suddenly quiet. I walked up and grabbed the mic and looked at all of the familiar faces. I looked at the dark red wall right behind the audience that was covered with posters of the famous comedians who were here before: Jerry Seinfeld, Drew Carey, Andy Kaufman, the ones who stood right where I was now. It reassured me. I felt like they must know exactly how I felt, and they survived it. I looked down at the audience. My dad was in his jean jacket vest ordering off the menu, my mother looked more nervous than I was, and my buddies were grouped together. Part of me just wanted to step down, walk over and joke around with them. My first thought was "Jesus, I’m about to talk about sex in front of my parents, friends and teachers! Some kids have nightmares about doing this, and I’m doing it by choice!" But it was too late. I was up there and now all I had to do was say something. I flashed a smile across my face and the first words came out: "What’s up?" From there, I worked into my routine.

I described the difficulties of being a boy having his first sexual experience, like how confusing the female body can be. I joked about how a guy feels like Stevie Wonder working a Rubik’s cube, and how unhelpful your friends can be. They give "advice" based on experiences they haven’t even had.

I got to see the reactions I was hoping for. My parents blushing, yet very proud. My principal mouthing "He did not just say that." And my friends’ loud, booming laughs that sounded so familiar. The seven-minute set felt like it was over in about seven seconds. I walked off to smiles and claps, the two things I was looking for.

Since my first performance, I’ve performed twice more at the Improv. Susanna started a company called Comedy Playground, a program which any student can join to learn stand-up comedy. I’ve been a part of Comedy Playground for almost six months now, and it’s the thing that I feel will take me where I want to go. I just have to figure out where exactly that is.

Maybe there’s a future for me in comedy

My dad recently gave me the "future" talk. He told me that in less than a year I have three choices: A) Go to college, B) Get a job, or C) Join the army (not gonna happen). We laughed together about how being a comedian is not supported by any college, isn’t really a job, and has nothing to do with the army.

"Congratulations, you’ve managed to pick a career that has nothing to do with any of these," he said. I’m still trying to figure out how far I’m gonna take this. At 17 it seems like there’s nothing certain about the future, which is terrifying. But I know that the only thing I can do is what I love.