In July, after war broke out between Israel and Hezbollah, one of L.A. Youth’s writers, Beeta Baghoolizadeh, asked our teen staff to help send humanitarian aid to displaced people in Lebanon and the Palestinian territories. Her request was prompted by the Council on American-Islamic Relations (CAIR), which had issued an appeal for humanitarian aid. “A strong humanitarian response by the American people will send a powerful message of hope and support to the Lebanese and Palestinian men, women and children caught up in the current humanitarian disaster,” said CAIR Executive Director Nihad Awad in the organization’s official press release. 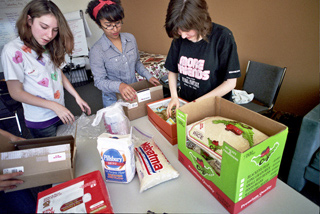 
As the Bush administration was describing Israel’s fight against Hezbollah as part of the global war on terror, we sent an e-mail to the 90 members of our staff asking for food and diapers.

Three teens responded right away that they would be helping out. Another wrote to ask why we were sending aid, wasn’t that just encouraging the violence? He decided to write something on why he opposed sending aid. A few days later he changed his mind, saying, “I guess I’m just upset because the Middle East is home to two of the oldest religions and it angers me that some do the opposite of what they’re taught.”

Ultimately, nine teens responded to our appeal, contributing 100 pounds of food and diapers, and $80 to help cover shipping costs. Here’s what some of them wrote about why they contributed:

I wanted to help others caught in the violence

I followed the news closely the first few weeks of the conflict. At one point, I broke down in tears because of the disturbing articles I was reading about the death toll and number of refugees struggling to find a haven. When a friend asked whether I was interested in sending some flour and sugar to Lebanon, I knew that I had to help. We’re blessed to live in America, and because of this blessing I feel it’s our duty to help other people in need.

I realized that sending a few bottles of cooking oil on my own wasn’t going to make much of an impact. I wanted to get others to care about what’s going on. I wanted to make a difference.

As an L.A. Youth staff writer, I decided to ask L.A. Youth to help organize a food drive among the diverse staff. I didn’t consider that someone might think we’re taking a political stand or trying to help terrorists. For me, it was a matter of reaching out to people who need my help. I felt like it would be the best way to get assistance from people who may not have otherwise done anything for Lebanon. Beyond that, it would catch the attention of the students on staff, and maybe others would organize food drives.

My expectations for the food drive were realistic—I knew only a handful of people would show up. But I didn’t expect so much support during the staff meeting afterward. No one at the meeting seemed to oppose what we were doing. Everyone recognized the importance of looking beyond race and religion and seeing humans, just like us.
—Beeta Baghoolizadeh, 18, Palos Verdes Peninsula HS (graduated)

I didn’t see it as choosing sides

Donating food to Lebanese relief efforts isn’t choosing Lebanon over Israel, nor is it commending Hezbollah. I feel that by donating food I am helping innocent people who have been affected by this war. When I see child-size coffins on the news I realize that this war has far outreached captured Israeli and Lebanese soldiers, and political affiliations in the Middle East.
—Alana Folsom, 15, John Marshall HS

Our project was worthwhile

Trying to help a tiny sliver of the millions of people innocently trapped in the violence seemed so pointless to me at first, but through this project I feel like I’ve come to understand a little bit more about what’s going on. And it’s not politics, it’s people, just like me, who, regardless of their race, backgrounds, religion or anything that could divide us, need help. Even just understanding this point and being tolerant helps.
—Machiko Yasuda, 17, Palos Verdes Peninsula HS (graduated)

Background on the recent conflict

Violence broke out in the region after Hezbollah, which the U.S. considers a terrorist group, sent fighters from Lebanon into Israel, where they killed three soldiers and took two hostage on July 12, according to news accounts. Israel responded with bombs and troops. Hezbollah launched rockets into northern Israel.
Israel dropped leaflets throughout southern Lebanon, urging people to leave home so they would not be bombed. This led an estimated 850,000 to head north or go to neighboring Syria.
More deaths were reported each day. By the time a United Nations-initiated ceasefire began August 14, about 1,000 Lebanese and 159 Israelis had been killed, according to BBC news reports. People who had fled Israeli bombing in southern Lebanon have returned home and the U.S. government has since pledged $230 million in aid to Lebanon.